Review: Red Hood and the Outlaws #6 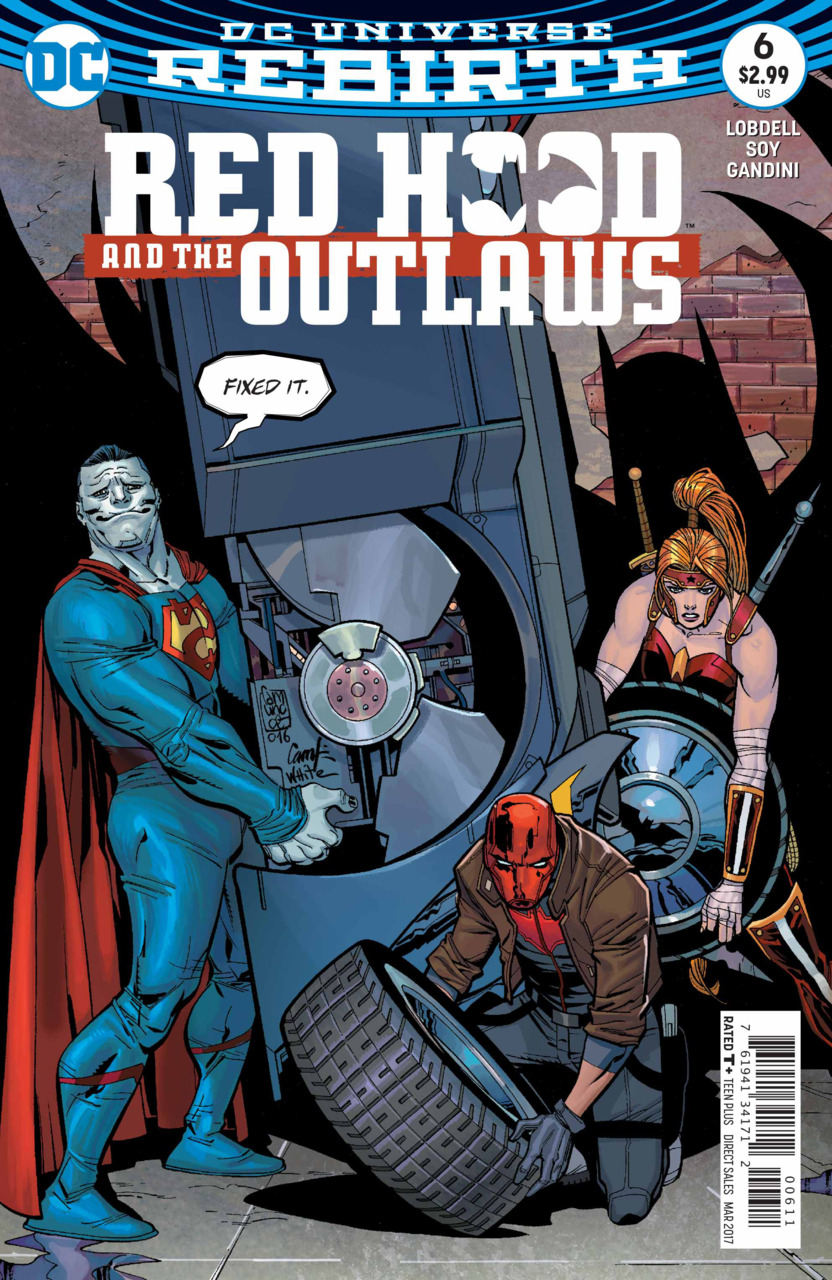 Synopsis: The issue picks where the last one left off with Black Mask holding his gun to Red Hood’s head. He begins monologuing and thanking Jason for bringing him closer to the Techno Organic Virus as well as Bizarro. With a massive crash, Artemis and Bizarro fall through the roof of the bunker which distracts Black Mask. Jason takes the offensive and trips up Black Mask telling him that Roman really does not love the city if he was willing to unleash Bizarro on it.

To Jason’s surprise, Bizarro is still being mind controlled as he throws Artemis at Jason. Jason tells Artemis his plan to push the offensive against both Bizarro and Black Mask, which will eventually cause the virus to course more rapidly through his brain and destroy it. After trading a few blows, Black Mask collapses and begins to speak in Kryptonian and seeing the world as Bizarro sees it. Black Mask begs Jason to save him with the cure and follow Batman’s “no kill rule”. Red Hood destroys the cure saying that he won’t kill him but he won’t help him either. As Black Mask violently slips into a coma, Red Hood tells him to remember that it was his own fault for his situation.

Outside, Bizarro finally is freed from the Techno Organic Virus and helps Artemis to her feet. Artemis tells them that this situation has distracted her from her main goal of finding the Bow of Ra. Red Hood and Bizarro both volunteer to help her. She agrees to this but says they will go their separate ways after that. Bizarro actually makes a joke about that never happening.

Meanwhile, a mysterious figure is putting together a tapestry of photos and newspaper clippings of the Dark Trinity’s activities. He labels them the “Dark Trinity” and states that he loves the name.

Just outside Gotham, Batman meets with Jason. He asks him point blank what happened to Black Mask. Jason reassures Bruce that he didn’t kill him but took a page out of the Dark Knight’s book and “did nothing”. He then tells him that he is done with playing by Batman’s rules of law and order. Batman actually laughs and takes off his mask explaining to Jason that his activities don’t exactly fall under the “law and order” requirements according to the actual law. He reminds Jason about the first night Jason was Robin and that he never wanted someone perfect but someone who would try their best and help make the city better. He tells Jason that he can keep working with Artemis and Bizarro. Jason then offers Bruce a burger from the same place Bruce did all those years ago after finding Jason. As the duo leans against the Batmobile and enjoys the meal, Bruce tells Jason that there are enough heroes in the world and it could use a few outlaws.

Review: Despite maybe one weak issue, this first arc of the Dark Trinity was fantastic. This last issue ended with a great blend of both action and character driven moments. Lobdell and Soy deliver this issue with a nice tease for a future villain which continues to leave me wanting more from this creative team in future arcs.

This issue had a few weaker moments like Jason’s plan to stop Black Mask, but I can still give this issue a perfect rating given how amazing other parts were. The loophole Jason finds in his promise to Batman to not kill was great and very reminiscent of Batman Begins when Bruce doesn’t save Ra’s al Ghul and lets him die. Also, the simple joke from Bizarro about the group not splitting up even after the next adventure helps to show where this series is headed.

Another great moment which will stick with me for awhile is the scene of Jason debriefing Bruce about the mission. Even though it was disconcerting to see Batman laugh, it was great to see these two have such a human and honest moment together. Their relationship certainly felt like a strained father son type but they seem to really come to terms with each other here. The panel that ends this scene was probably the best part of the whole series thus far and Soy really created a memorable one to portray the old dynamic duo.