Review: Red Hood and the Outlaws #7 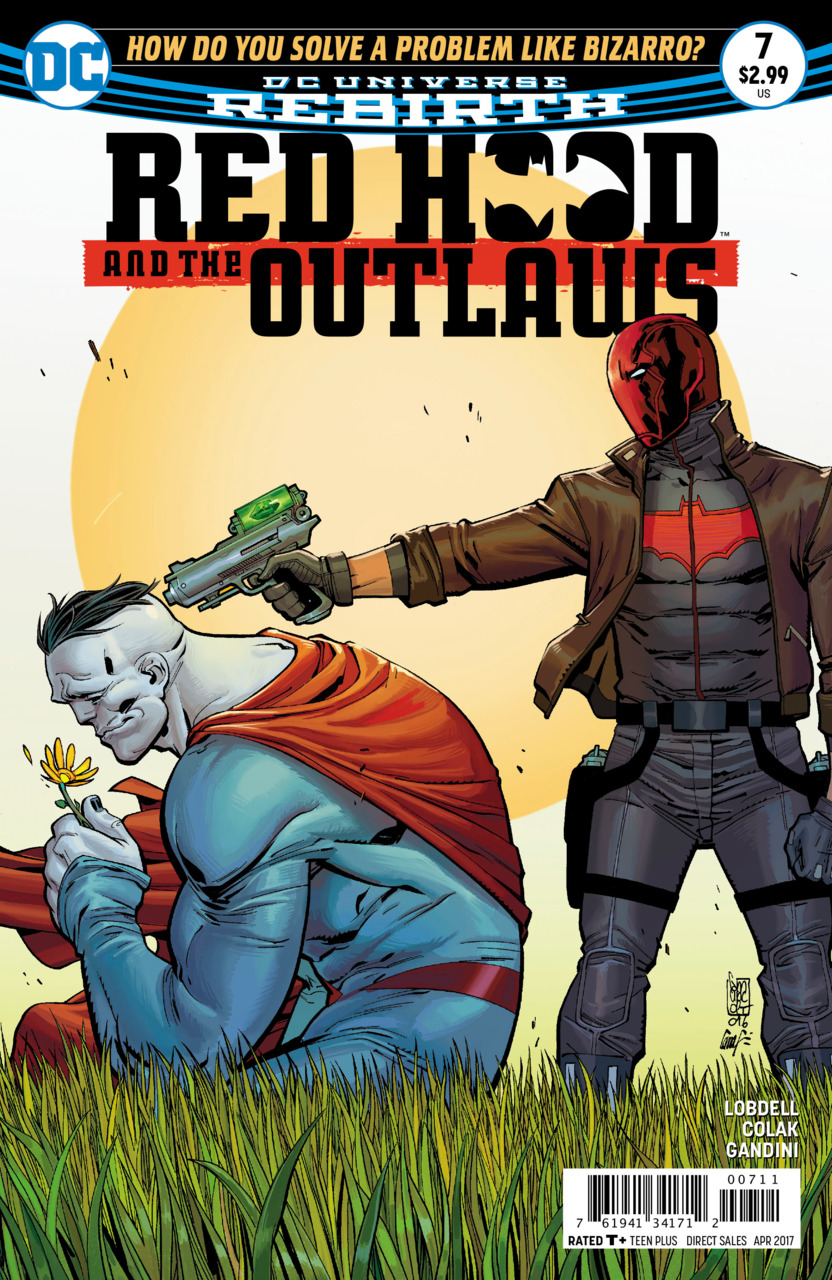 Synopsis: The issue picks up with Red Hood informing the remaining members of the Black Mask gang that their boss is out of commission and its time to leave town. The gang does not take the announcement well and pulls their guns on him. Clearly unworried, Red Hood lets the gang know that he will not be doing anything but his “friend” will. Bizarro then arrives and the two wreak havoc on the gang members. As they fight, Red Hood has to remind Bizarro not to be “too hard” on the gang. Just as things are slowing down, Killer Croc appears and strikes Jason. Bizarro, furious at his friend being hit, lashes out and decapitates Killer Croc to Jason’s shock. It is revealed that the Killer Croc was only a robot but Bizarro admits he thought the monster was real.

Returning to their home base at Ma Gunn’s Home for the Criminally Infirmed, Jason asks Artemis about having Bizarro around. She admits that he is a danger and begins to show Jason hacked videos from the Lexcorp lab that created the clones of Superman. The gruesome surveillance videos depict many clones brutally killing Lexcorp staff. Artemis ends their conversation asking Jason if he will be able to put down Bizarro should he become too dangerous.

Jason goes to Wayne Manor to ask Alfred if Bruce ever doubted him over the years and his many setbacks. Alfred bluntly states that Bruce always believed in Jason throughout his life. Jason sneaks into a vault and takes some Kryptonite that he plans to keep “just in case”.

Jason then goes with Bizarro to a quiet spot outside the city next to a lake. Bizarro tells Jason how he loves the world but that many of his memories were hazy versions of Superman’s. However, his true memories started when Jason found him and he feels like his own individual self.

While Bizarro is opening up, Jason raises a gun with a Kryptonite bullet to Bizarro’s head. He lowers the gun after Bizarro says he promises to try and be the best Bizarro he can be with Jason’s help. Jason tells him they should be getting back, but Bizarro asks if they can watch the sunset just a little longer. The two sit side by side on the beach and watch the sun set.

Thoughts: Another solid issue for the series, but this only really applies to the writing, not so much the artwork. The overall dynamic between Jason and Bizarro is becoming one of my favorite team-ups in Rebirth. The exploration into their relationship still left Artemis out of the picture this issue unfortunately, but hopefully she is more incorporated in the next few issues.

I mentioned the artwork was not very good in this issue and it becomes more of an issue every time I read it. It actually felt “sloppy” which is a word I hate to describe artwork as I hope every artist gives full effort towards their job. I felt the characters look was carried over well from Soy’s artwork on the first arc. I was not even sure who Artemis was until they actually used her name. It’s a big step down from Soy’s work so I’m really hoping this will get better or they will be bringing on a different artist to complement Lobdell’s current great writing.

Regarding the writing, Lobdell continues to deliver great character moments between Jason and Bizarro. The whole situation of Bizarro’s potential danger to the world (even if he does not mean it) feels like a real one and the struggle that Jason now has, given his responsibility, makes for a great character arc. Jason is now in a parent role like Bruce and having to live with the consequences of taking someone on as a partner and hoping it turns out alright. This shows maturity and, ultimately, is taking Jason in a whole new direction as a character. We have mostly seen him as a comedic element to the Batman world with lots of action and fun. Now, we are getting to see a character become more than just a jokester and I hope this experience brings about an even better Red Hood.

Although the artwork leaves much to be desired (putting it nicely), I was still drawn into this issue with Lobdell’s writing and character development. The relationship between Bizarro and Jason is a fascinating one that I can’t wait to see what will happen in the future.