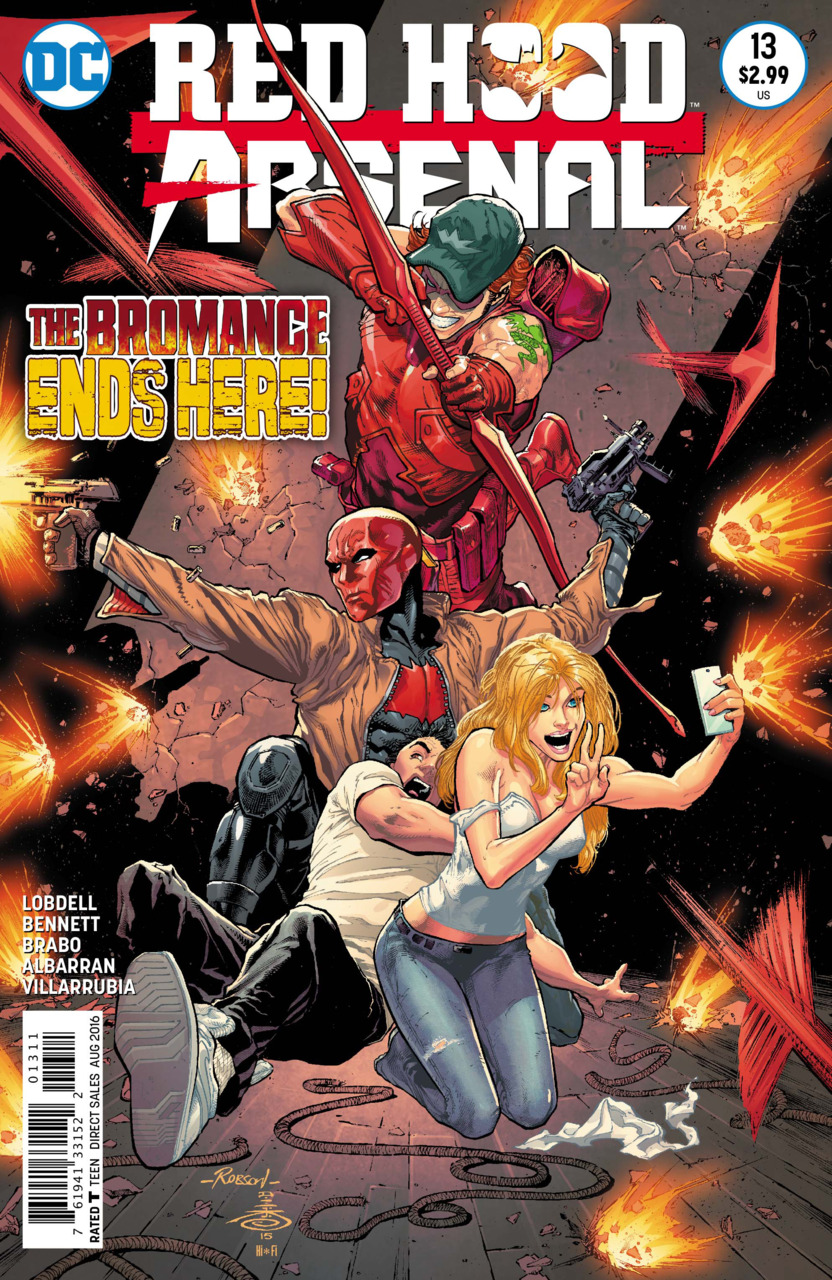 “Later” opens with the Iron Rule threatening the captive Roy Harper’s life, demanding that the Red Hood show himself. Meanwhile Joker’s Daughter (JD) is holding a gun to Tara’s head as she lies on the floor. Suddenly an arrow hits Everest and Roy starts to count down. The arrow explodes and Everest dies. Roy screams that the arrows are designed to put out nuclear energy and not to be used on people. More arrows fly striking other members of the Iron Rule, killing all of them. Jason shows himself and moves in to complete the kill. Roy stands in front of the last member of the Iron Rule, the woman. Roy pleads for Jason to stand down. Jason assures Roy that his good far outweighs his bad. Jason on the other hand has a lot lacking. Roy knocks the woman unconscious. Roy knows that Jason will not shoot an unconscious victim. Jason stands down just as JD opens her mouth. We get commentary from the people viewing all this on line that JD is crazy and she should be the one to die.

Now we are left with a standoff. JD holds a gun to Tara while Jason points his gun at JD. JD however collapses when Roy shoots her with a taser arrow. Tara gets up and goes outside to flag a cop and EMT’s leaving Jason and Roy alone.

Roy tells Jason that he killed four people with the world watching on the Internet and he had to tase a sixteen year old girl to prevent Jason from killing her. Jason does not care what the world thinks and shoots the camera. Jason tells Roy that he has too much faith in people while Jason has none. Jason cannot be the hero Roy wants him to be however Roy can stay the hero he is. Jason walks off.

We get a back up story in this issue. “A Friendship Born” opens with Speedy holding the Bat Boys, a gang of thugs at bay with his bow. Robin meanwhile is out on his own without Batman. Robin swings in to engage the Bat Boys. One of the thugs gets a bead on Robin with his gun but is brought down by one of Speedy’s shock arrows. The two introduce themselves and muse that one day they may be partners.

I did not like this issue. I fail to see the point of this. We get the one scene of Jason rescuing Roy and Tara and going in heavy handed. The rescue is followed by the separation of Jason and Roy leading to the new Red Hood and the Outlaws series and the upcoming Titans series for Roy.

There was not a fight here as Jason just picks off the Iron Rule one by one even getting to the point of almost killing JD threatening to shoot her between the eyes. We get a little exchange where JD says that she and Jason have the same father, referring to the Joker himself that we saw in the previous issues and Jason refutes her claim.

I was really unhappy with the use of Tara in this issue. In the last issue I questioned using her character here and in this issue I dislike it. She is just the damsel in distress here but I believe it is worse than that. When we see her, she is lying on her back with her hands cuffed behind her back and a gun to her head. We see her shirt lifted up exposing her belly and accentuating her hips. I have a problem with this. This basically puts the woman as a sexual hostage that I would expect to find in other more adult forms of entertainment. She only has two lines in this entire scene. The first is to ask someone to kill JD and the other is her finally on her feet walking out to get the cops and an ambulance. There is no story reason for her to be here other that’s to give JD a person to hold a gun to, JD could have just been there to have a standoff with Jason without having Tara there period. Jason would still be depicted as cold hearted which is what the writers appear to be hammering down with this quick issue.

This resolution is so quick and final that a backup story had to be included to bring the page count up. We get the story of Roy and Jason first meeting probably as a foil to the two splitting up in their previous pages. The art change is good but I actually thought I was looking at an ad when it started and I found this a jarring inclusion in this issue.

Leave this issue on the shelf. Only pick it up if you have to have the complete run.