When did Jim Gordon find out Barbara was Batgirl? 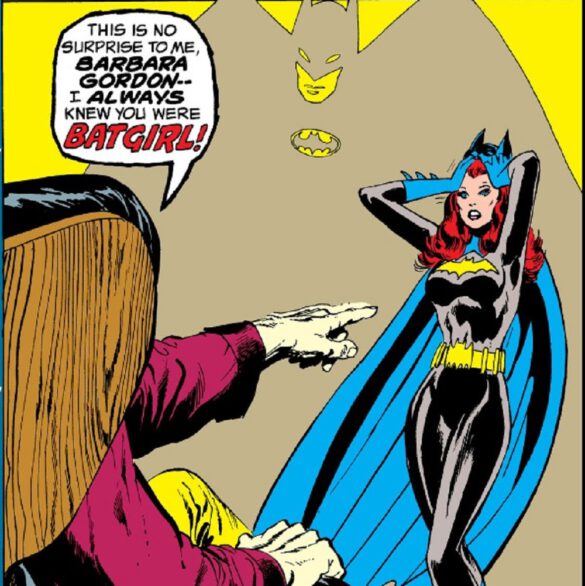 James Tynion IV has been promising that his Joker ongoing series (art by Guillem March, colors by Arif Prianto) would heavily feature Barbara Gordon since the main character featured would actually be Jim Gordon. What almost no one expected is that The Joker #2 reveals that Jim knows Babs is Batgirl and Oracle, something many (foremost among them TBU’s Batgirl to Oracle expert Stella) have advocated as a powerful narrative step forward for years. However, despite the shocking and exhilarating nature of the sequence in The Joker #2, readers may be surprised that Babs has revealed her secret identity to her father not once, but two other time times in continuity (not counting the classic Batman: The Animated Series episode “Over the Edge” or the recent popular arc in the second season of Harley Quinn involving Batgirl and her father). 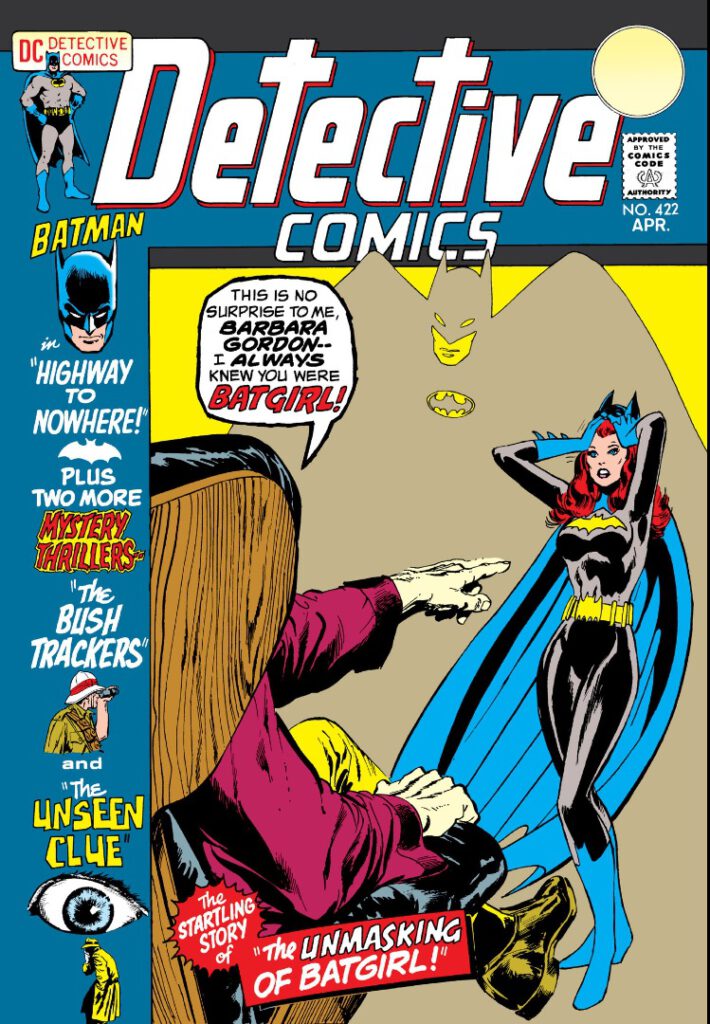 Starting in Pre-Crisis continuity, in 1972, when Batgirl appeared as a regular backup feature in the Detective Comics series, a lengthy sequence of stories revealed that Jim had figured out his daughter’s identity as the dashing dare doll, Batgirl. Issue #417-421 showed this gradual process, as Jim’s knowledge came out in his thought bubbles, and he hoped his daughter would feel comfortable telling him directly someday. In Detective Comics #422 (written by Frank Robbins, art by Don Heck), that day came, with the backup feature taking over the cover as Batgirl unmasked in front of the world and to her father. The revelation came as part of the plotline that would catapult Babs to Washington DC as a Representative when she unmasks in the final panel after Jim calls Batgirl “Babs”, and she tells him she wants to run for Congress in his place. 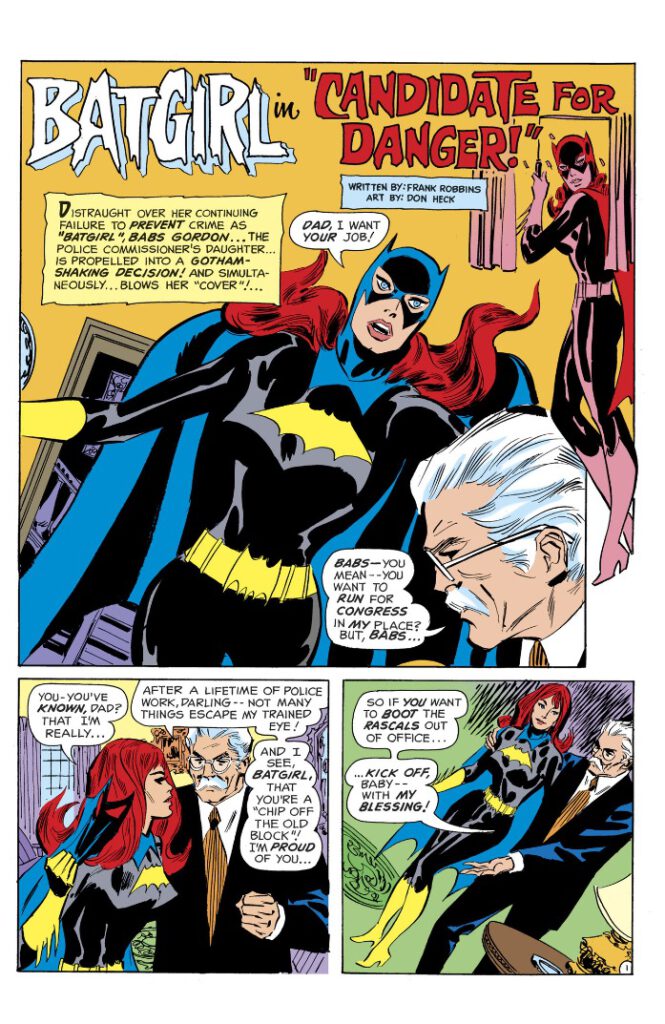 The next issue (Detective Comics #423 as seen above) picked up slightly before where #422 left off, expanding that final panel into a more back and forth process of revelation – but despite this expansion and the prominence of issue #422’s cover, the revelation plot point only takes up a page or two at most, and the rest of the backup feature devotes all of its length to Barbara’s campaign for Congress. As Stella, Josh, and Donovan noted in Batgirl to Oracle episode 24, the issue sadly underwhelms, despite the potential of the moment, as Barbara’s election propels her out of Detective Comics, and any relationship changes between Babs and her father disappear along with the Batgirl feature, replaced by Babs’ now ex-boyfriend Jason Bard’s private eye comic strip.

During the rest of the pre-Crisis era, Batgirl and her father rarely discussed this radical change to their relationship. After Crisis on Infinite Earths and moving into the Post-Crisis continuity, with Batgirl’s retirement and then brutal paralyzation by the Joker in Batman: The Killing Joke, Barbara slowly became the new powerful hero Oracle in Suicide Squad and then the Birds of Prey titles. Her father’s knowledge of her former and current life rarely appears, with the rare exception of Batman Annual #13, written by Christopher Priest (then going by James Owsley), penciled by Michael Bair, released in 1989, which flashes back before and after Batman: The Killing Joke, showing Jim’s knowledge of Barbara’s lives. This knowledge was not usually assumed, however, despite small nods in issues like The Batman Chronicles #1.

In 2005, however, writer Gail Simone made a bold move in the Birds of Prey series. Birds of Prey #89 (art by Paulo Siqueira), featured Barbara recovering from a near-fatal biological invasion by Brainiac and re-evaluating her closest relationships as a result, including with her father. While her field agents Black Canary and Huntress tangle with Deathstroke and a legion of formidable foes, Babs meets her father, now retired from his role as police commissioner, at the physical therapist, then takes him to her base of operations, the Clocktower, and lays out her present and past lives as Oracle and Batgirl. Just as before, though Babs’ mastermind activities as Oracle are a surprise to Jim, he deduced her activities as Batgirl long ago.

Unlike the previous occasion in Detective Comics, Babs and her father get to share a full conversation and even a memorable confrontation with Batman as Jim gets to defend his daughter against his former best friend’s attempt to intimidate her, though Babs no longer worries about Batman’s approval. Sadly, despite the expanded time granted their upgraded relationship, One Year Later begins in Birds of Prey #92, after the continuity alterations of Infinite Crisis, with Jim returning to his role as Commissioner and having his knowledge of his daughter’s secrets once again safely wiped from his mind. Jim would not appear in the Birds of Prey title again, and all other interactions between Babs and her father would once again operate with the wall of concealment between them.

Moving into the Post-Flashpoint area of continuity, as Stella has noted in her meticulous coverage of Babs’ appearances in the New 52 and beyond, the writers have teased over and over again the storytelling possibilities of Jim learning Barbara’s secrets, specifically in the Burnside run with Batgirl #41 and Batgirl #42, and the first arc of Batgirl and the Birds of Prey. However, after ten years in this continuity (and sixteen years since the previous iteration of the revelation), James Tynion took the bold step of showing that Jim Gordon knows his daughter’s secrets in The Joker #2.

After the brutal events of The Batman Who Laughs miniseries and the ugliness of his infection by that hideous villain in The Infected: The Commissioner, where Jim tried to blow up Gotham City and lost his position as Commissioner, Jim Gordon takes a step back and looks at his life. Working secretly with Batman in the wake of the Joker War and A-Day, Jim is approached by a mysterious woman named Cressida who wants him to assassinate the Joker.  Jim ponders this offer and takes it to Batman – omitting the demand for lethal justice – and demands resources in his hunt for Gotham’s worst criminal, who has taken so much from him – his second wife, Sarah Essen, his son James Jr., and his daughter’s legs (for a time). Batman counters with the offer of Oracle as a chaperone – which Jim derails with a comment that Barbara may simply be worried about her old man. After a stunned pause (beautifully dramatic, which James smugly appreciates), Babs insists on meeting her father at the Clocktower, mirroring her previous revelation scene in Birds of Prey.  Tynion devotes five full pages to a lengthy and emotional conversation between James and Barbara, in which the family goes over past and the future, all beautifully rendered by March and Prianto.

What sets this most recent revelation apart from the previous two is that even though Jim is not as prominent a figure (retired once again, as in Birds of Prey), this series promises to take Jim and Barbara on at least a year-long journey in pursuit of the Joker. No easy Crisis or Congressional election will cut short the difference in their relationship (though some have theorized that Jim will die at the end of the big arc of The Joker series, which will sadly neutralize any future development, but would neatly tie off the security risk that is presented by a civilian having this certain knowledge). Whatever the case and though separated by Jim’s travels, Barbara and her father will share in the hunt for their most vicious foe, and all signs point to that partnership being part of the most exciting title from DC in their Infinite Frontier lineup.