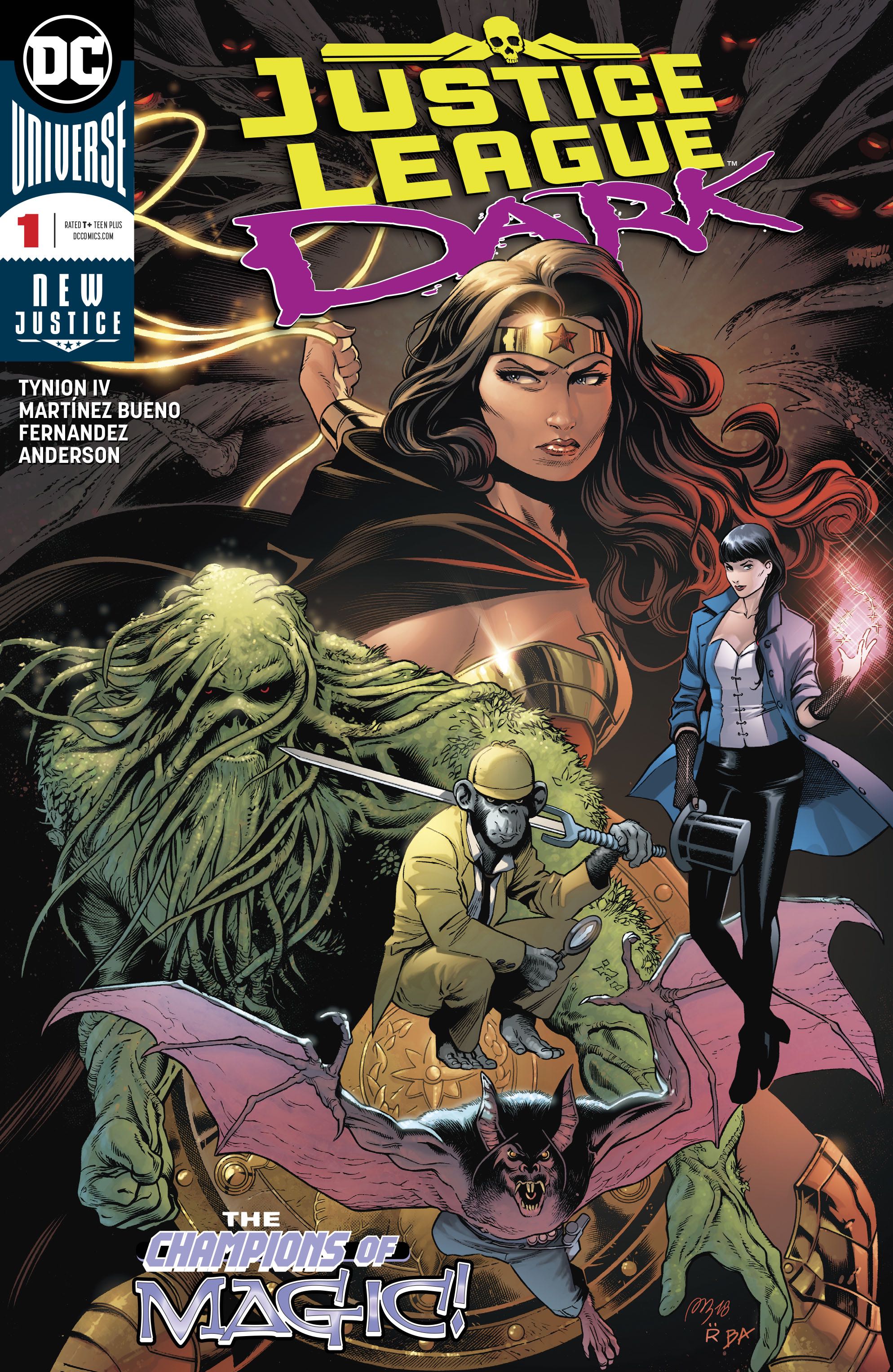 Synopsis (spoilers ahead): Zatanna Zatara, mistress of magic, performs in front of a packed house – but when she pulls a rabbit out of her hat, it appears dead and dripping blood, followed by a hideous magical creature of tentacles and gaping mouths. As the monster begins to attack the audience, Zatanna watches helplessly until Wonder Woman bursts through the ceiling. Zatanna’s attempts to help Diana fight the beast backfires, so she burns the hat out of which the monster appeared, destroying the portal through which it came. Though Diana presses, Zatanna still refuses to join Wonder Woman’s magical Justice League.

At Wintersgate Manor, Zatanna watches as Klarion the Witch Boy and Morgaine enter. Behind her, John Constantine appears, lighting a cigarette, dressed unusually sharply. Constantine prods Zatanna about her indecision, then leaves after reminding her of his role in her father’s death.

In a pocket dimension bar, Wonder Woman attempts to persuade Bobo, Detective Chimp to join as well. He tells her that the battle during No Justice has thrown magic out of balance, and they discuss the bodies consumed by evil magic that Diana has stored in the Hall of Justice. His bartender, Traci Thirteen, lets Diana know that Chimp is also the heir to the Nightmaster title after the event of Dark Knights: Metal.

At Wintersgate Manor, Jason Blood (host of Etrigan the Demon) tells the dark magic wielders of the DC Universe that the tear in the Source Wall has caused the problems with magic, as Zatanna listens from the shadows.

Beneath the Hall of Justice, Man-Bat greets Diana and Chimp and shows them the magically destroyed bodies. Chimp is suspicious of the Batman villain, but Dr. Langstrom insists that he wants to help.

In Salem, Zatanna upbraids Swamp Thing for sitting inactive in front of the Tree of Wonder (from No Justice). He tells her he doesn’t think Etrigan or Wonder Woman’s plans will work, and shows her a vision of her dead father, still burning, who warns Zatanna that the original owners of magic are coming and to find the one person who could stop them – or hasten the end. He also names the Otherkind and the Upside Down Man, who then appears, threatening to eat all the world to achieve his goals.

In the Hall of Justice, the dead bodies come to life, screeching about the Otherkind. Man-Bat takes his serum to help fight, and Swamp Thing and Zatanna arrive, bringing aid in the fight and the dire warning from Zatara – that one of them will destroy all humanity.

Analysis: James Tynion IV debuts his solo writing effort in the New Justice initiative (he’s also writing several issues in the twice-monthly main Justice League book, filling in for Scott Snyder) with plenty of horrors. His partner from the almost fifty-issue run on Detective Comics from the beginning of Rebirth, penciller Alvaro Martinez (along with inker Raul Fernandez and colorist Brad Anderson) create beautifully thick lines and horrifyingly gross monsters for our stalwart heroes to fight. The artwork is definitely a highlight, as a bit too much of this story depends heavily on the events of Metal and No Justice, and a lot of your liking of this story will hinge on whether you liked those events as well. Though nothing is nearly as off the wall as those events, the foundation rests on the madcap inventiveness that characterized those books. The Upside Down Man and the Otherkind are suitably ominous, though hopefully, Tynion’s gift for exposition will flesh those out in the coming issues.

Though the details in the voices for each of the five main characters are strong, as Tynion generally excels with voicing a team as shown in Detective Comics and Batman Eternal, the characters don’t seem to quite connect. Oddly, though Zatanna was a breath of fresh air in the Detective Comics arc “Intelligence,” here she seems almost completely helpless and reactive, not taking initiative even when her dead father appears to her. Additionally, her dithering and hostile attitude towards nearly everyone in the book doesn’t endear her to readers, despite Martinez’s appealing new design. Wonder Woman, though much warmer in her interactions, also feels distant, since she has yet to show how the current crisis actually affects her. Detective Chimp, Man-Bat, and Swamp Thing all appear more successful, though Man-Bat’s arc feels like a slightly re-skinned attempt to duplicate the wild success Tynion had with Clayface in Detective Comics. Hopefully the team and their appeal to readers gels quickly, so that readers will be on board with every single one’s journey – Zatanna’s to regain her powers, Wonder Woman’s to save the world, Detective Chimp to deal with his new legacies, Man-Bat to atone for his crimes, and Swamp Thing to restore the Green.