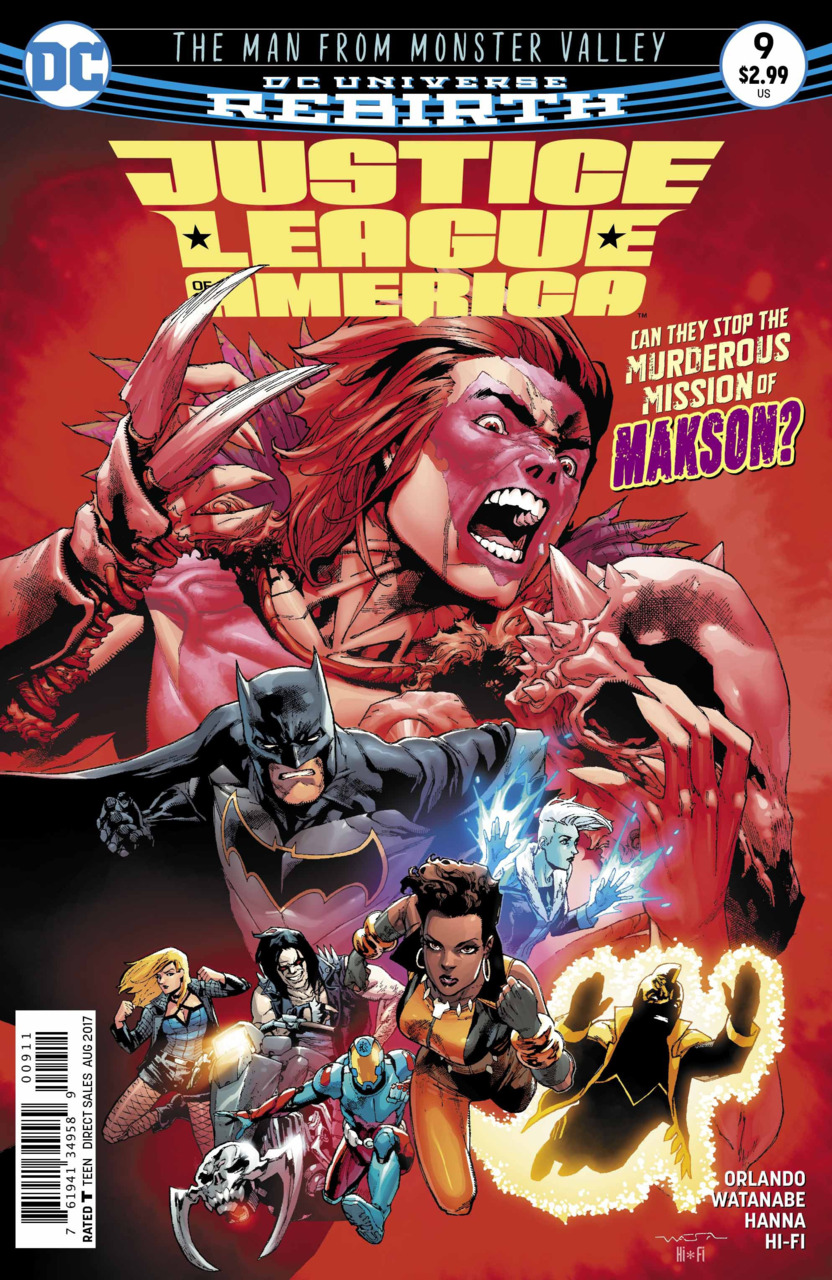 (Spoilers ahead) The story picks up from last issue with the JLA discovering that Makson, the Tarzan-like man raised by dinosaurs in a lost world dubbed “Monster Valley” is not what he seems and plans on exacting revenge on his long-lost family for trying to kill him and murdering his surrogate mother. Makson has gathered all the extended members of his family in a locked room and announces that everyone will die. The JLA interrupt Makson and take him down quickly. The JLA expose the murderous plans of Makson’s family who are all taken into custody and Makson returns to Monster Valley, leaving his newly inherited family fortune to be given away to charity by Vixen. The Ray confronts Batman about not giving Makson a chance and storms off with Vixen speaking to Batman about the cost of keeping secrets from the rest of the team. The issue ends with the Ray’s mother, Nadine Terrill trapped in a mirror dimension while a mysterious voice speaks to her.

So. Just to be clear as to what happens in this issue, the antagonist of this issue, Makson, is revealed to be a murderous beast man with a plan to murder a room full of people. And what is Makson’s big plan? To take his shirt off and yell at them, which essentially makes Makson the comic book villain equivalent of a coked-up frat guy in a parking lot after watching too much UFC. The story doesn’t seem to know what it wants this character to be. He’s supposed to be a threat to the team and not what he seems, but then Orlando takes all the teeth out of the character with a weak and anemic plot that has Makson harmlessly screaming at his victims. It is as if Orlando wanted to make sure that Makson never did anything truly bad so he could be used later in some sort of heroic role, but as a result the character comes across as neutered and the lack of any sort of payoff to the “mystery” of Makson’s intentions comes across as uninteresting and frankly, pointless.

This quick two issue story has been an exercise in not taking the time to do a story properly. Makson is set up too quickly for there to be any sort of mystery as to what he really wants, and the pay off comes off as a rushed half-measure. Orlando clearly wanted to do a quick story about the team being based on giving people second chances; the conflict this theme has with having an untrusting loner like Batman leading the team. There is certainly a lot of ground that can be covered in exploring this theme and the conflict between Batman’s suspicious nature and the more trusting members of his team is an interesting idea. There is no time taken, however, to give the team any particular reason to trust Makson. The Ray in particular, comes across as a naïve child who seems to have put his faith in Makson for absolutely no reason and as a result, his outrage at being “betrayed” by Makson feels disingenuous and his outrage at Batman’s distrust of Makson feels completely unreasonable. Batman is proven to be completely right about not trusting Makson and the Ray pouts and storms away like a six year old instead of finding some sort of common ground with Batman or acknowledging that Batman was right.

On the plus side Wantanbe’s art has stayed consistent throughout this story and Wantanbe seems to be developing into a solid back-up artist although I still find myself missing Ivan Reis’ more detailed pencils and wish that the art teams were more regular on this book.

In summary, this is a storyline that went nowhere in a hurry. Do better guys.