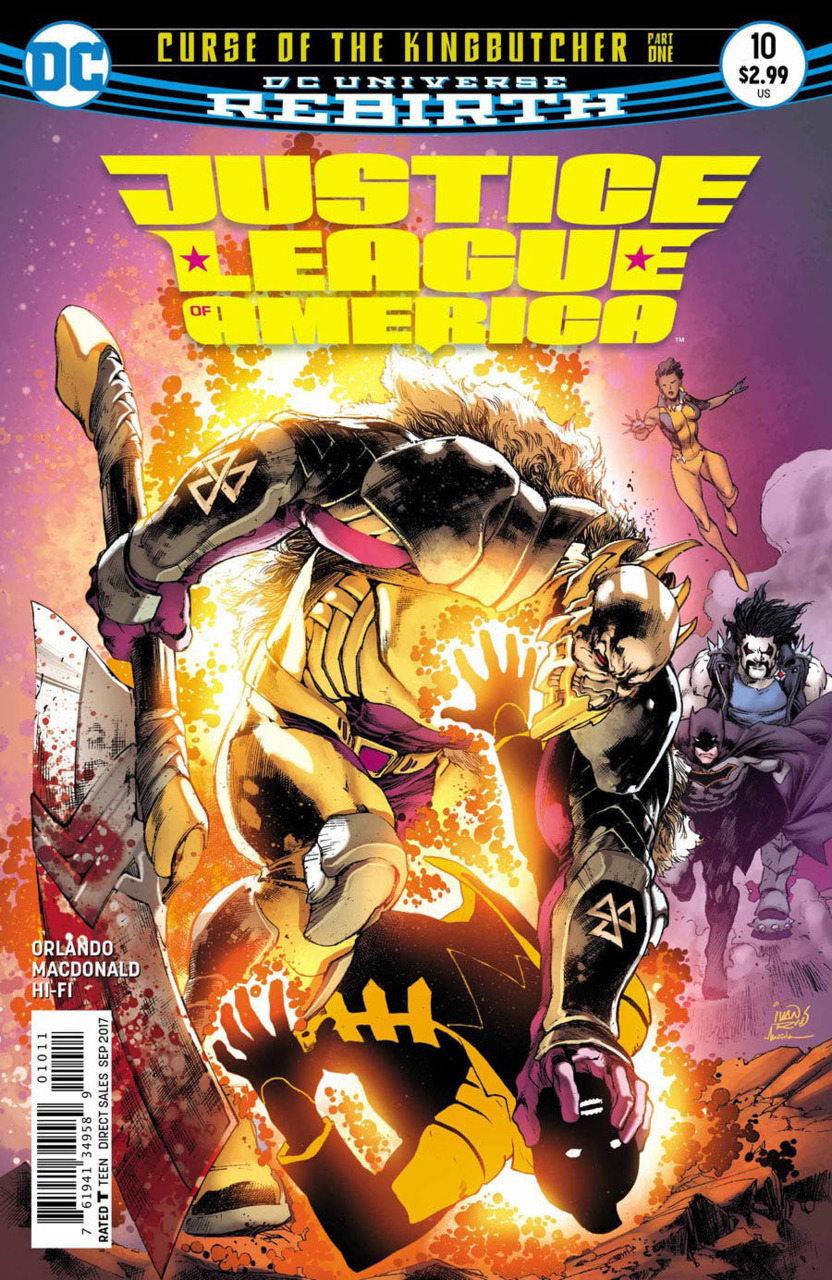 (Spoilers ahead) The issue opens in the City of Vanity where a man afflicted with fibromyalgia wakes up to find that his wish has been granted and his pain is gone. This is short-lived as a large man wearing armor and a fur cape arrives and introduces himself as “The Kingbutcher”. Kingbutcher draws out some sort of energy shaped like a giant bird from the man and cuts down this bird with a large axe and disappears, leaving the man once again in pain. The story then moves to the Sanctuary where Batman is holding a meeting to discuss the fallout of last issue, with some of the team, the Ray in particular, being upset over Batman’s mistrust of Makson. The meeting is cut short when an alert brings up a news report for the City of Vanity. The news report explains that people, who are being called “Wishers” are sharing the same dream and waking up to find their fondest wishes are coming true and that a being is now showing up to take their wishes away. Atom and Frost stay at the Sanctuary to keep working on a cure for Frost’s cold sickness and the rest of the team goes to Vanity to investigate. The team meet with the Mayor of Vanity, Caden, who is also a childhood friend of the Ray. The meeting is interrupted to by the Kingbutcher and after fighting the League to a standstill, the Kingbutcher explains that the wishes he is taking away are harmful and transports the league to the outskirts of Philidelphia, the birthplace of the Ray, to prove his point. The issue ends with The Ray staring in a window watching his mother having made a wish for a new family.

After the missteps of the previous storyline, the creators opt for a smaller story focusing on the Ray and seem to be heading towards exploring his early childhood in isolation and his estranged parents. The Ray is an interesting character and its interesting that the Ray is the optimistic centre of the team when you look at his backstory. There’s something tragically real about a superhero who happens to be a gay man with a backstory of his parents keeping him inside so he won’t learn who he really is until he runs away. Its an interesting thread for Orlando to be pulling on. I do find the Ray’s whining about Batman’s attitude towards trusting people to be childish and unreasonable, especially with Batman flat out saying at the start of this issue that he let everyone makeup their own mind about Makson. There doesn’t seem to be any good reason for the Ray’s attitude problem. If they had done a story where Batman’s distrust was unwarranted, then Ray’s feeling would be more reasonable. I think Orlando would do focus some time on Batman and the Ray, let them find some common ground, and move on with things, because as it stands Ray just comes off as whiney and unlikeable in these scenes which detracts from what is otherwise worthwhile character.

On its face, there’s something about investigating a city of people whose dreams are being granted and then taken away that feels a little more appropriate for the Care Bears than the Justice League of America. There aren’t really any high stakes being presented in the story other than hurt feelings. Kingbutcher is presented as more of a possible threat than an actual threat to the JLA and I wouldn’t be surprised if the true villain of the story turns out to be whatever is granting people’s wishes. That being said, given that one of the overarching themes of the series has been about the team inspiring hope, so I’m reserving judgement until I see where they are going with this.

On the art front Andy MacDonald is back up to handle the art chores and I find that his art has improved from his last story arc. Although still not always present, MacDonald’s detailed backgrounds are well done and he seems to have a good grasp of character moments. I still feel that human anatomy is not MacDonald’s strong suit and his figures seem distorted and stunted, like if the DC Universe was filtered through the lens of the Hobbits from Lord of the Rings and as a result the action sequences aren’t particularly dynamic or interesting. MacDonald’s pencils have a very indie-comic feel to them and I think are better suited to something more character driven instead of a superhero comic.

In summary, this issue is caught juggling left-over pieces of the last story that did not work along with trying to push forward with a more character-driven story that has some potential.