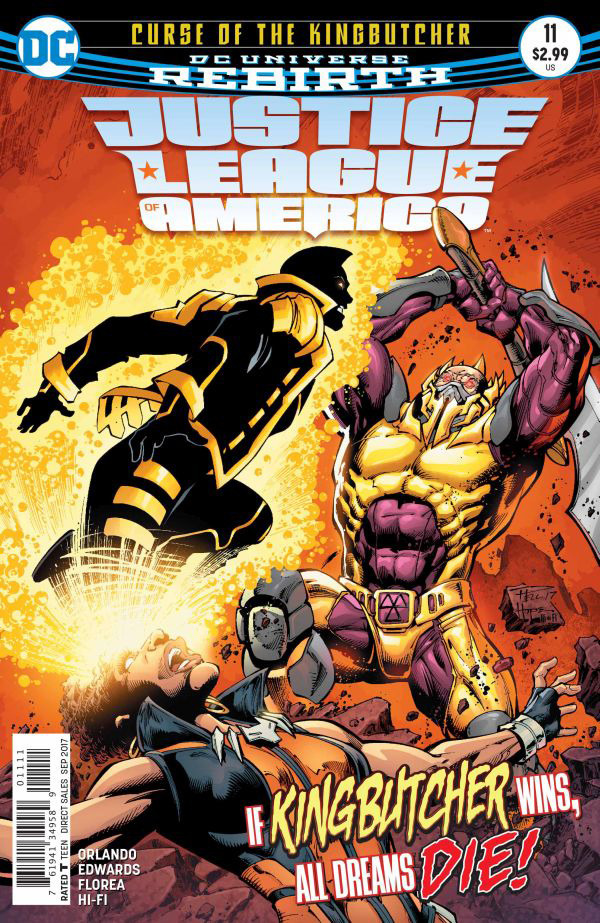 Overview: Curse of the Kingbutcher Part Two: The Justice League of America faces off against the Kingbutcher while the Atom and Killer Frost continue to search for a cure for Frost’s cold sickness.

Synopsis (spoilers ahead): The issue opens with The Atom frustrated over the lack of success in finding his mentor Ray Palmer.  He’s interrupted by Killer Frost and the two travel to Lamumba, Africa where they meet with Eric Mndawe, aka Freedom Beast.  Mndawe uses his powers to see if Frost is a candidate for a process called “Bio-Fission”, which would separate the damaged cells that cause Frost’s sickness.  Mndawe tells Frost that there is too little left of her own life force for him to help her.

Meanwhile outside of Philadelphia, the fight is on between the rest of the JLA and the Kingbutcher.  The previous issue ended with the Kingbutcher showing the JLA the dangers of the mysterious force “the Might Behind the Mirror” granting people’s wishes with the Ray’s estranged mother now having a new family.  The Ray’s mother tries to speak with Ray as the battle continues.  After Vixen uses her powers to discover that the Kingbutcher’s crown is the only thing tethering him to their world, (using the same force that Freedom Beast used earlier in the issue), the Ray is able to destroy Kingbutcher’s crown and Kingbutcher disappears from the fight.  The Ray and his mother have a moment together where she tries to apologize for the Ray’s terrible childhood, to which the Ray walks away in anger. The team debriefs back in the City of Vanity with Batman expressing concern over the granted wishes that the Kingbutcher was trying to reverse, which leads him into conflict with the Ray, who again takes issue with Batman’s lack of trust in people.

The story then moves to Kravia where Batman visits the imprisoned Lord Havok, discovering that it is the same force behind his abilities that has been granting wishes.  Batman reveals that the “Might behind the Mirror” visited him as well offering to grant his fondest wish and that he turned it down.  The next scene takes place in the Realm of Order, where the Kingbutcher is stripped of his titles by his superiors and stated that the Might Behind the Mirror is growing stronger with each wish and it must be stopped.  The Ray and Xenos have a quiet moment back at Sanctuary talking about anger and forgiveness and the issue ends with the Atom finding a signal from Professor Palmer.

Analysis: The second half of this story arc has a lot of different moving pieces and Orlando juggles the character and plots well and the issue is well paced and efficient with the Kingbutcher plot quickly resolved and still finding time to touch on the many ongoing plots that the story has set up.  The story almost acts as a subtle recap issue summing up the previous ten issues before moving forward with whatever is planned next for the series.  One of the strengths of the book has been the more serial and character driven nature of the series, with the major plots expanding over the course of a longer period of time and focusing on character.  This continues to set JLA apart from books such as Justice League where the story is more episodic with each adventure being more self contained and is more about the threat from the villain then the characters in the story. Orlando does a good job of checking in on the majority of the characters and the story gives a few quick moments for each of the major plot points that the series has dealt with up to now.  I appreciated how the story gives more weight to the Might Behind the Mirror as the “Big Bad” of the series so far and moves what has been a plotline simmering in the background to the forefront of the plot.

The story opens with a quick check in on the hunt for Ray Palmer and gives a moment for the continued search for a cure for Killer Frost’s condition.  I thought it was a nice touch to include Freedom Beast in this scene as it also ties in nicely to Vixen’s powers and the solution for taking down the Kingbutcher later in the issue.  Black Canary, Vixen and the Ray all get a moment to shine in the defeat of the Kingbutcher, which I felt was a more inventive way to resolve the issue.  There is a temptation when a book prominently features a major character like Batman to throw that character in as the solution to every problem and Orlando continues to resist that impulse, which helps keep things fresh.

The Ray is given a lot to do in this issue and factors heavily into the resolution of story.  I have commented in recent issues that the Ray’s attitude, particular to Batman, has been a little petulant and childish.  This issue takes the time to put things more in context.  I find it interesting that the most optimistic member of the team is also has so much baggage and rage locked inside him.  Xenos continues to serve mostly as a sounding board for the Ray and while it serves a purpose here well, I do feel that Xenos feels underdeveloped and I hope that as the team’s resident gadget guy, that he gets more fleshed out.  Lobo continues to be little more use then to saying something weird and punch things, but I think that is more of a function of Lobo being a fairly shallow character to begin with.

The art by Neil Edwards handles both the quiet moments and the action sequences well and I prefer Edward’s style to Andy MacDonald’s work in the previous issue.  I do continue to find the continual art changes to be jarring and I can only imagine how frustrating it will be to read this series in a collected edition.

Final Thoughts: This series has stumbled in the execution of the last few story arcs.  This issue sees a marked improvement and I’m interested in seeing where things are going to go next.  I would recommend this issue as a good jumping on point for anyone who is looking to get caught up before joining in.