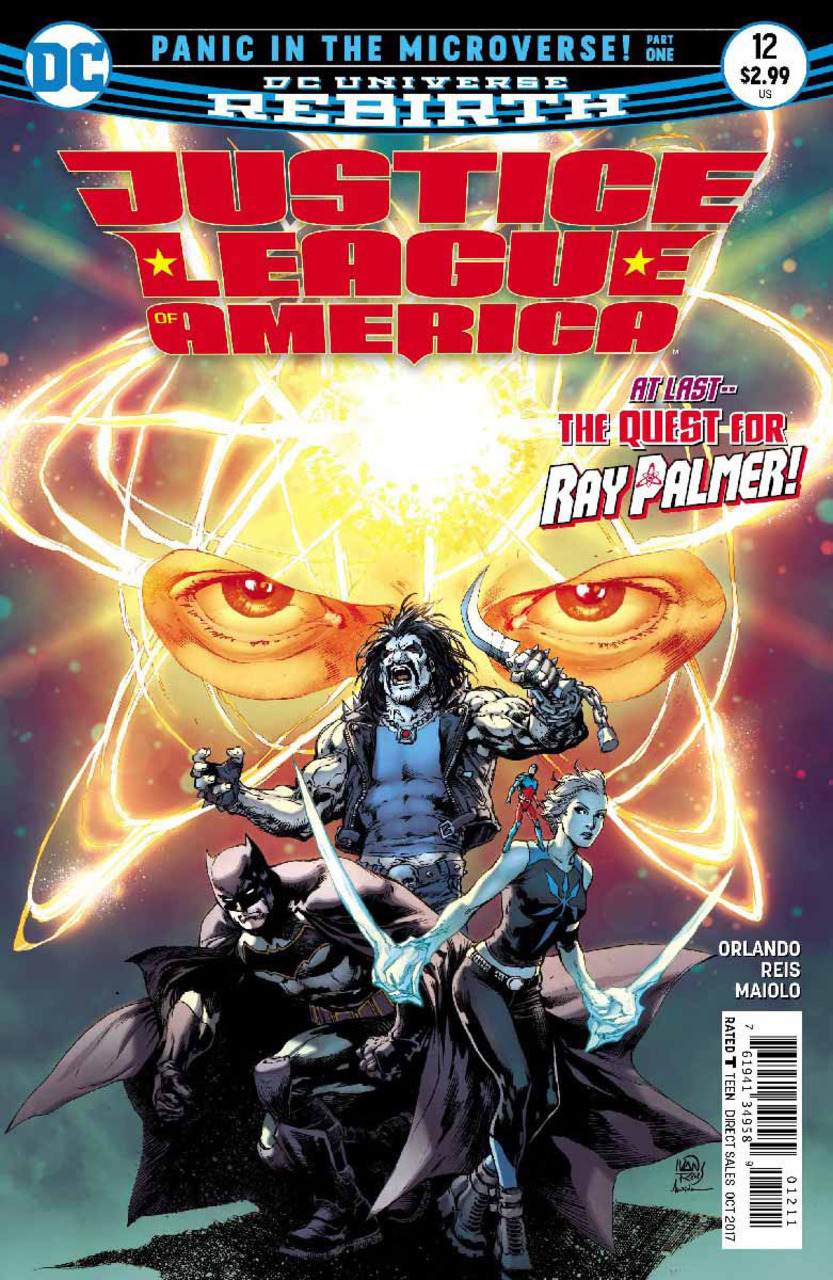 Overview: The Justice League of America enters the Microverse in search of Ray Palmer.

Synopsis (spoilers ahead): The story opens at the Heaven’s Undercarriage bar in Mammoth, New Jersey where Batman meets with Lobo.  Lobo speaks of wanting what’s owed to him and Batman responds that a fight’s coming and once they win it, Lobo will receive his payment.

The story then moves through the Pacific Ocean where Vixen and Black Canary are rescuing a hostage while in Pittsburgh, Killer Frost is attacked by the villain Afterthought who quickly disappears.  Meanwhile back at the Sanctuary, The Ray and Xenos share a quiet movie night as Xenos suggests that the Ray call his mom, which he quickly shuts down.  The team is summoned by the Atom who explains that Professor Ray Palmer, the previous Atom and his mentor, had disappeared into another world called the Microverse and that he has tracked the signal that Palmer’s bio-belt emits and asks for the team’s help in finding him.  Batman leaves Vixen and Black Canary to work the other open cases the JLA has been working on and the rest of the team begins preparing to leave for the Microverse.

With the help of Lobo, the Atom builds the “Shrinkship”, a craft that can carry the team into the Microverse.  The Atom miniaturizes the team and they depart in the Shrinkship through the Quantum Barrier and into the Microverse.  The ship quickly comes under fire and crash lands into a colorful, alien forest.  The team follows the increasingly strong signal from Palmer’s bio-belt and the team is attacked by alien soldiers which the team takes down quickly.  The issue ends with a hooded figure appearing before the team wearing Palmer’s bio-belt, leaving the mystery of his identity presumably to the next issue.

Analysis: This is a tight “the team is going on a mission” story and I appreciated how straightforward the story was.  I have felt that after a strong start, the book has lacked some focus and its refreshing for a more back to basics story.  Ray Palmer being missing in action is a thread that has been sitting unresolved since the start of the book and after a string of generally unremarkable villains, the shift in focus in a welcome one.  I’ve thought it was strange that Palmer going missing hasn’t been more of a priority to the team, with the search being more of a side project for Ryan to work on in between missions and trying to cure Frost’s cold sickens.  After a quiet start and some set up, actual mission into the Microverse doesn’t begin until halfway through the issue and is essentially one prolonged action sequence which balances out the story nicely.  I want to assume that it is indeed Palmer under that hood but given Orlando’s talent for pulling deep into the DC Universe’s bench, it’s anybody’s bet who’s going to show up next issue.

One of Orlando’s strengths on this title is that he is by in large good at juggling a large cast, with several members of the team getting moments to shine in this issue.  Its no surprise that the characters who get the most focus are those that aren’t appearing in other books, in this case, Lobo, the Ray, Killer Frost and Atom.  Lobo in particular is well used in this issue, with a quick reminder that there is still an outstanding mystery to explain why Lobo would agree to be on the team in the first place.  I enjoyed that Orlando found something for Lobo to do other than fight.  It’s a very fitting and logical thing that the galaxy-hopping alien bounty hunter would know a thing or two about exotic space propulsion systems and it’s a good use of the character.  Lobo is on his face a very one-dimensional character and little touches like this help to flesh out Lobo a little.

The Ray and Xenos have been given several quiet and emotional moments since Xenos’ arrival on the book but the exact nature of their relationship has been undefined.  The scene between the two in this issue is clearly romantic and it plays very naturally.  Xenos seems to be the voice of reason in their relationship and his concern over the Ray’s grudge against his mother is a nice way to both inform their relationship as well as touch on the ongoing plot thread of the Ray’s anger over his childhood.  Xenos, so far in the book, has been used effectively as a sounding board for the Ray, and while I appreciate that it serves to give the Ray more depth, I do feel that Xenos should be given a bit more to do in the book and not simply be relegated to be the romantic partner of one of the main characters.  For example, I did think it was strange that the team’s techno-wizard had nothing to do with the building of the Shrinkship and seems like a missed opportunity.

Ivan Reis returns to handle the art in this issue, and it could not be more welcomed.  Reis’ detailed pencil work handles the quiet moments of Ray and Xenos sharing a glass of wine, the Shrinkship entering the Microverse and the following action sequences equally well.  In speaking earlier about Xenos and the Ray’s relationship, the romantic tone of their evening is completely the work of Reis’ art.  I think its sometimes more difficult for an artist to draw a convincing scene with two people having a tender moment on the couch then to draw something fantastic and its well handled here.  The inconsistent art in this book has been a continued source of frustration and I truly wish that if Reis can’t keep pace with doing more issues that they either pair him with another artist that is at the same level or slow the book down to 12 issues a year to give Reis a chance to draw more of it.

Final Thoughts: JLA seems to be rebounding in its last couple issues.  This issue is a tight story that balances the quiet moments with an action heavy second half and I enjoyed reading it.