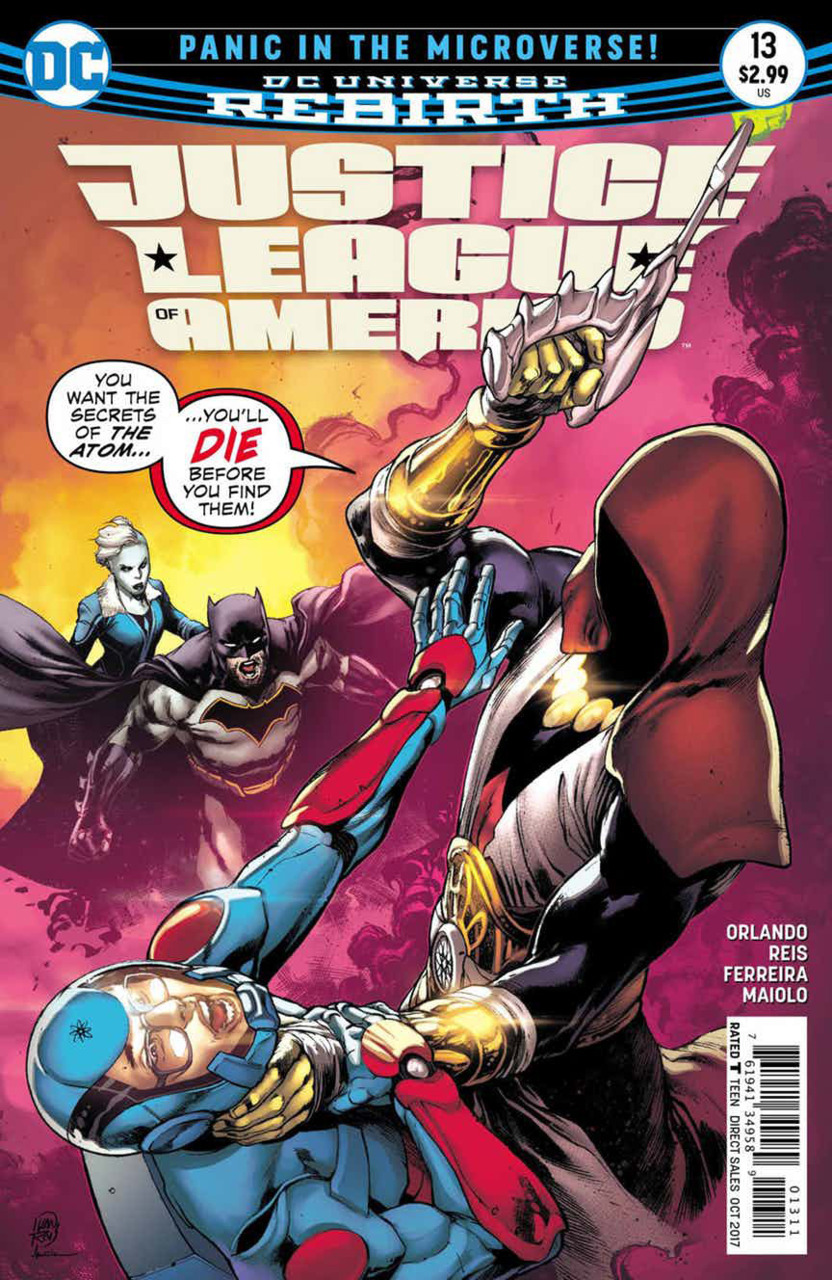 Overview: The JLA continues their split adventure.  Batman, Frost, Atom, and Lobo delve deeper into the Microverse searching for Ray Palmer while Black Canary and Ray deal with the mysterious new villain Afterthought, a character JLA writer Steve Orlando created during his days on the Midnighter title last seen in the custody of Spryal after serving in the Suicide Squad.

Synopsis (spoilers ahead): The action picks right back up with a hooded, armed figure wearing Ray Palmer’s bio-belt.  The figure wastes no time in revealing that she is actually Preon, an associate of Ray Palmer.  She recounts a brief history of her time with Palmer, informing the group of her status as his guide through the world of The Immensity, and their ultimate separation during a quantum storm.   His current location is unknown to her as well.  As it turns out, he was working with another scientist, Aron Aut, in finding a way to save the Microverse which has become unstable due to a tear in the fabric of reality.  The team was searching for the epicenter of the damage when they were separated.  Preon took the belt to a high point in hopes of getting the beacon to reach Palmer’s world.

Seeking to find Palmer and Aut, Preon takes the group to where she hopes to find a miracle, Moz-Ga the Thinking Planet.  On his back, the travelers meet the countless refugees of the failing Mircroverse, each hoping to gain help from Moz-Ga, an entity held together by a banished sorcerer from a higher plane, who has been silent for thousands of years.  He acts as a repository of knowledge the team originally hoped to use to locate the epicenter of the problems, but they found they could not get the entity to speak, either.  As they make their way, however, the team is mobbed by refugees who think Preon, a member of the Docent folk, can get them away from the dangers presented by the dying Microverse.  In the chaos, however, a new figure emerges who assaults Preon and reveals himself as Palmer’s partner in science, the missing Aron Aut.

To diffuse the situation he explains that Preon is alive, but trapped in a millisecond by his weapon he calls a repeater.  He further informs the team that Preon is actually a pirate who betrayed them and stole their technology.  Aut had been recovering from his wounds on Moz-Ga while attempting to find a way to contact Palmer.  Their meeting is cut short, however, as another quantum storm starts up and beings to decimate the area.  A bolt of energy strikes Lobo as the team scatters.  Ryan Choi begins to break under the pressure, but Frost brings him back by telling him the only reason she came was that she believed in him.  Not in Ray Palmer or Batman.  She kisses him (through his face shield) and he begins to form a plan.  A dangerous plan, naturally.  He thinks he has figured out how to speak to Moz-Ga, but to do so he needs to shrink further down, which might kill him.  Not thinking twice, he makes the jump.

Back in the normal size world, Black Canary and Ray have a brief encounter with Afterthought, who Frost met in the previous issue.  Afterthought uses his precognition abilities to land a few hits on the JLA members before teleporting away with the cryptic message that he was just testing the field.

Analysis:  Didn’t Marvel do this story way back in 2012?  With Janet van Dyne (the Wasp) being presumed dead during Secret Invasion, but revealed to be living on a subatomic level in the Microverse and having discovered a civilization living on that level?  Anyway, that was my main takeaway from this story, a testament to how forgettable it was.  There was nothing outright bad with the exception of some of the character dynamics and Ryan Choi’s petulance after learning Ray Palmer had a team he did not know about was off putting and seemed to be forced.

Steve Orlando continues to drop a deluge of new self-created characters on us, each just as bland as the last.  I’m not opposed to using new characters as opposed to digging existing characters out of the DC vault, but they really should be given room to grow a bit, which Orlando really hasn’t had time for with these quick, cast-heavy stories.  The result is a clunky handful of forgettable characters, which is unfortunate as there are some with promise.  Orlando is solid writer, after all.

There are some aspects of the story that save it from being much worse.  While I thought the introduction to the Mircoverse was tedious, as we got more and more information about the entity Moz-Ga and the nature of the quantum storms, I felt the hook settle into place.  I’m interested in this story, even if its presentation isn’t as great as it could be.  Orlando is trying something new and he should be congratulated for it, even if the result is mediocre.

Ivan Reis has always been an artist with highs and lows to me.  Here we are given some of the best highs he can give the sci-fi landscapes and designs are all captivating thanks to the collaborative work with Ferreira on inks and Maiolo on colors.  Panel layout and character positioning, however, come on the low end of spectrum.  While technically sound, I didn’t care for the way Reis always had the characters posed like a splash page.  There were times they really didn’t mesh well with the story and facial expressions appeared overly dramatic on the page.

Final Thoughts:  We’re now eight months into Orlando’s run on JLA and just now touching on one of the plot points from way back in DC Universe Rebirth.  I wish I could say the payoff was worth the wait, but we seem to just be building on a foundation of mediocrity.  Orlando’s one-shots from January had promise, if nothing else, but the size of the cast seems to weigh down the story-telling.  This story will be going on through the end of October, which is fairly long for a Rebirth title.  That gives them plenty of time to bring it back together after a somewhat rocky start.