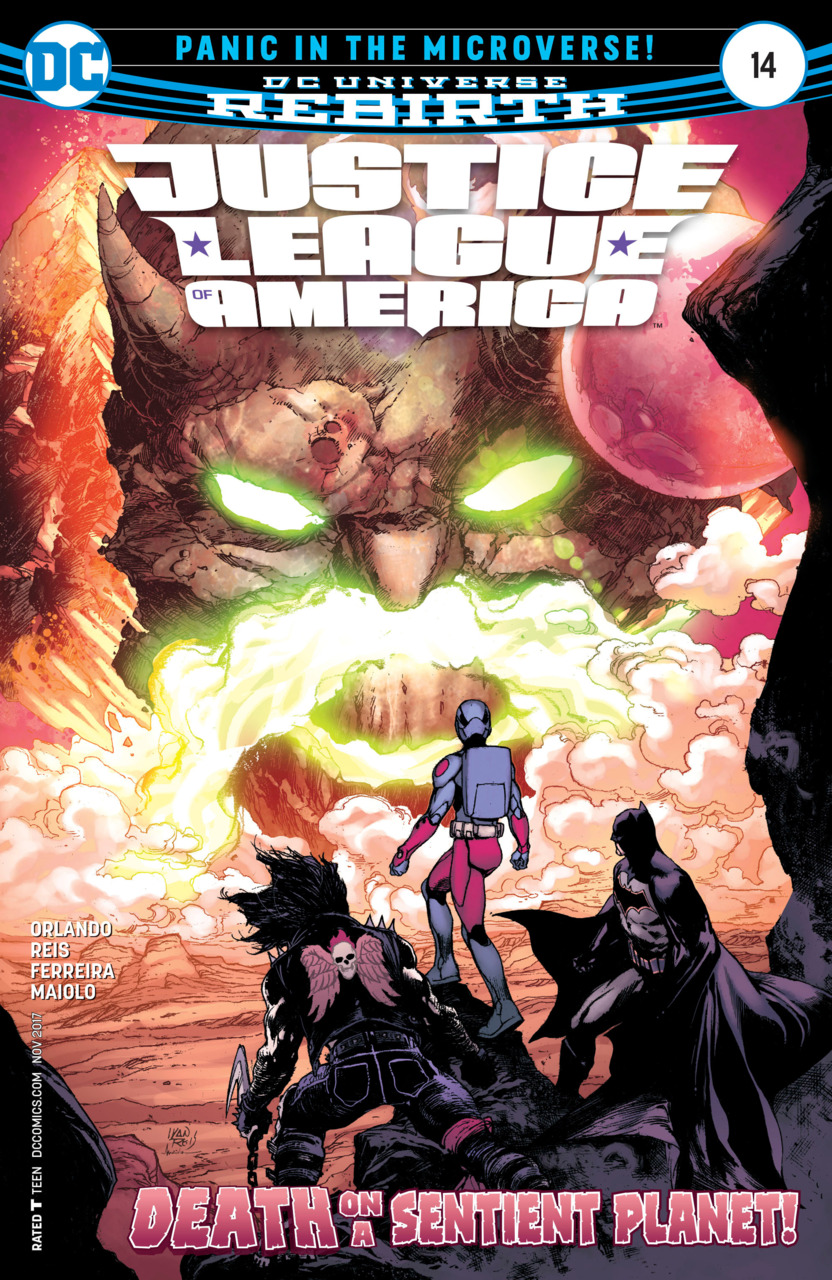 Overview: Lobo weathers a quantum storm while swinging his own dismembered arm as a weapon against a horde of faceless villains.  That statement alone either makes you buy the book or drop it and head home.  I can’t make this stuff up, folks, only Steve Orlando can.  The JLA’s adventures in the Microverse continue and we get some plot development in addition to Lobo’s shenanigans.  It’s a win/win.  Unless you don’t like Lobo.

Synopsis (spoilers ahead): There’s little question what this book is about, as the opening page is the only scene we get that takes place outside of the Microverse.  In it, Mari/Vixen heads to Peru to have a cryptic conversation with magician Gregorio de la Vega (also know as “Extrano”, DC’s answer to Dr. Strange), who is much less…out there…than his original style from the 80’s.  He is another holdover from writer Steve Orlando’s previous works, like recent villain Afterthought, as he played a role in the recent Midnighter and Apollo miniseries. The scene ends quickly, however, and the action heads back to the Mircroverse.

When we last left the JLA away team, Batman, Frost, and Lobo were with Dr. Aut and a calvacade of refugees weathering a quantum storm on the surface of the sentient planet Moz-Ga while the Ryan Choi Atom when down even smaller to attempt to make contact with Moz-Ga himself.  Topside things take a turn for the worse when the null army shows up to pull the plug on Moz-Ga.  The JLA deal with this new level of interference while Choi makes an impassioned plea to the sentient planet in the hopes that he can use his powers to restabilize the Microverse.  Luckily Moz-Ga is open to Choi’s approach as he is the only one to have ever approached the supreme being not as a means, but as another living thing.  Sadly, even his immense powers have limitations and fixing the Microverse is outside of his abilities.  He can, however, point the team in the direction of Choi’s MIA mentor, Ray Palmer.

The JLA deals with the null army by shutting down their weaponry through on of Batman’s gadgets and leaving them in the unforgiving hands of the refugees.  Of note, during the fight, Frost loses control briefly and winds up killing one of the null army combatants, a point which will undoubtedly be picked up on later in the story.  Armed with a piece of Moz-Ga himself in the form of a bio-ship, Choi returns to the surface and gathers the group (including Dr. Aut) and heads off to hopefully put an end to the chaos thrashing the Microverse.  The team eventually arrives at Palmer’s coordinates and the two Atoms are reunited.  The happy reunion is cut short, though, as Ray Palmer notices the presence of Dr. Aut and is none too pleased, as apparently the doctor’s presence has “doomed them all.”

Analysis: Moz-Ga is intriguing, but in the end he winds up being nothing more than what he criticized petitioners for approaching him as:  a means to an end.  He is probably the most interesting new character we’ve met in Orlando’s run on JLA.  I feel like there’s a possibility for a larger story there and I hope we get to explore more of his backstory before we leave the Microverse.  My largest concern with Orlando’s work on the title to date seems to be the tendency for him to move the action away from what I want to see.  Maybe it’s a personal thing, or maybe it’s an issue with the narrative flow.  It’s hard to tell, but there are steps in the right direction in this issue.  The brief look into Moz-Ga’s nature was welcome, and the story seems to be heading in a definite direction.  Orlando’s a very capable writer, but I remain unsure of the purpose of this book in the larger scheme of things.  The past few stories have felt more like filler than anything else.

Other thoughts: I’m still not 100% certain what’s going on with the null army.  If it was previously explained I would have greatly appreciated a recap on them and their ambitions.  I like the battle of the wills going on within Frost, but it’s been a little trite so far.  Orlando’s better than that and I know he can step it up with this character.  I’ve completely forgotten what’s going on in the regular-size world of the story, which is unfortunate as I enjoy Black Canary and Ray who haven’t got much page time recently.  I have no idea why Lobo is here.

The art from Ivan Reis and team is a big step forward from last issue.  The panel and page layouts seem to be a lot more thought through and were visually engaging in a way that was previously missing.  With the more hectic nature of this issue it was nice to see a more fluid sense of movement from the characters.  I’m still not a fan of Reis’ expressions, but the body language was a marked improvement.  Farreira on inks and Maiolo on colors continue to do the best they can with Reis’ layouts.  I was particularly impressed with Maiolo’s work differentiating locations with different color palettes.  It’s a big (small?) world down in the Microverse, and if nothing else, the art team has given us some very engaging visuals.

Final Thoughts: We’re getting some momentum, which I like.  Ray Palmer is finally back in the DC Universe, which I like.  He made some small appearances in various titles here and there, but he has been largely absent throughout the New 52.  I’m slightly irritated that it’s taken us nearly 16 months to get some insight into the character tease from May 2016’s DC Universe Rebirth, but I’m trying to not hold that against the team on this book.  This issue was a step in the right direction after last issue’s somewhat dud of a story.  I’m looking forward to some more Ray Palmer in my life.