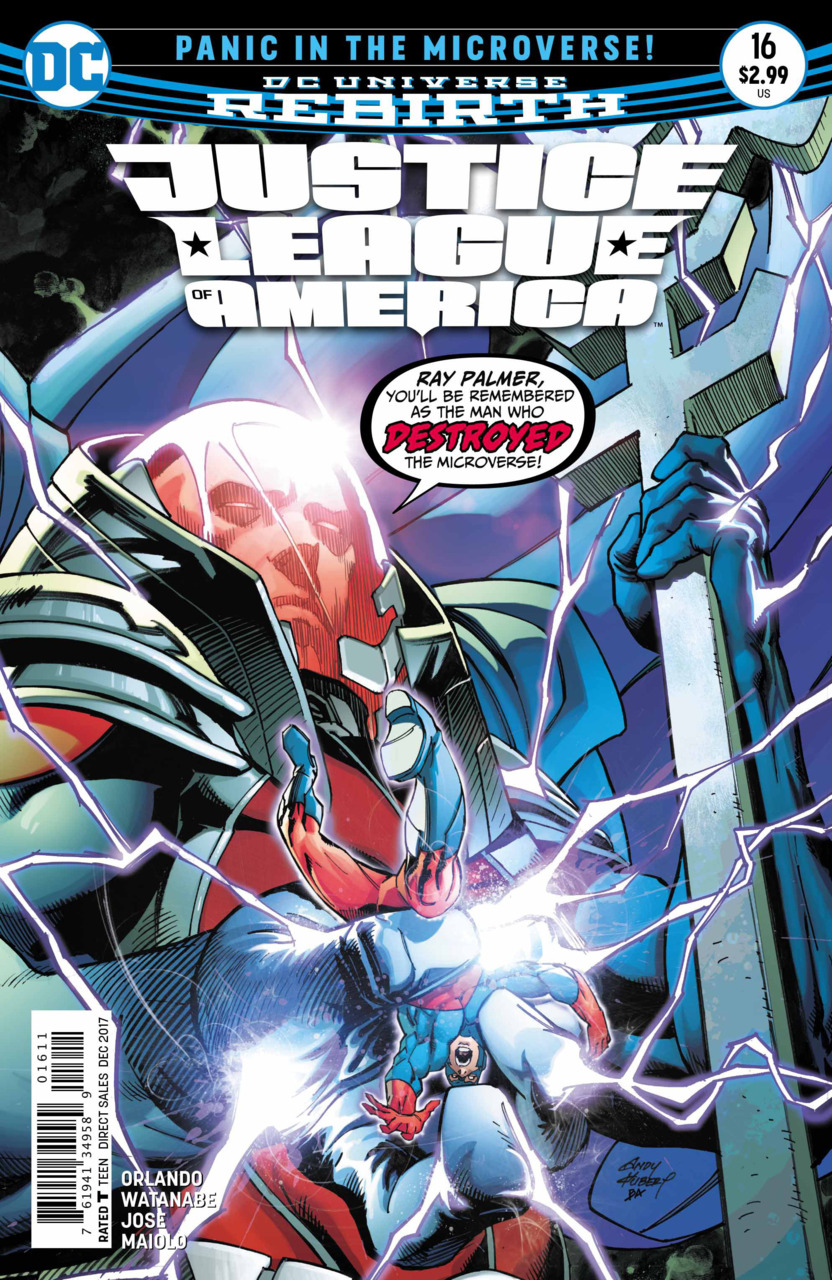 Overview:  We’ve followed Ray Palmer’s adventures through the Microverse with his newfound team Preon and Dr. Aron Aut, but now it has finally come time to find out why the later betrayed the Atom.

Synopsis (Spoilers Ahead):  Dr. Aron Aut grew up very much like his parents, interested in numbers and science, but he had a completely different take on the matter.  Whereas others may have seen beauty in complexity, young Dr. Aut saw the opposite – inefficiency and the “inelegance of existence.”  He found himself drawn to the null set, which sparked his personal intellectual voyage.  He grew more and more dedicated to the idea of existence coming from nothing and returning to that same nothing.  He led a simple life until the arrival of the quantum storms, which took what very little he had away from him and left him with a plan.  A plan which Ray Palmer stumbled into.

After the flashback to the origins of Aut, we got back to the moment Aut and Palmer arrive at the Ignition Point.  The duo begins to set up their equipment and Palmer gets a good look at some of what Aut is setting up and comes to the terrifying realization that Aut has no desire to stop the Ignition Point.  He wants to hasten the end of existence.  Aut seals Palmer in a makeshift prison and goes full heel and reveals his new super-villain identity, The Null.  The two argue their sides of their issue, with Palmer still seeing hope and the chance to rise above the issues facing Aut whereas Aut himself  sees Palmer’s undertaking as pointless.  He believes the damage done by the Ignition Point to be beyond repair, and quickening the end will bring existence back to the nothingness it originally came from.  The raw potential of nothing.  While The Null goes about his villainous work, Palmer records the famous message first seen in DC Universe: Rebirth #1, and sends it up to the surface world.

With the beacon for help sent out, Palmer and Aut begin their inevitable showdown.  The fight is quick as Palmer has prepared for the possibility of someone betraying him.  He reveals that the bio-belt Aut created from Palmer’s instructions has a backdoor hidden in its programming that allows Palmer to override it and teleport Aut far away from the Ignition Point.  Aut is sent to the far reaches of the Microverse, where he is eventually rescued and taken to Moz-Ga, setting up his first appearance earlier in this arc.  Back at the Ignition Point, Palmer focuses his attention on the as yet unseen force creating the quantum storms destroying the Microverse.   Back in the present Aut has reassumed his identity as The Null and makes it clear he is there to finish his work.

Analysis:  Dr. Aut’s motivations have finally been revealed, but I can’t honestly say that I’m entirely satisfied with the explanation given to us.  Maybe if we’d gotten a little more time with the character it would be more powerful, but after the obvious misdirection with Preon, it was fairly evident that Aut would be eventually taking the heel turn.  The building blocks of complexity are there.  Aut has the possibility of being an interesting, flawed, tragic character, but everything is presented very one-dimensionally.  Besides the reveal of Aut’s motivations there really isn’t much to talk about with this book as we don’t get to see any more of Preon or anyone in the present aside from the last page’s lead-in to the conclusion in two weeks.   The past two issues have been tough to really critique as they have mainly been exposition.  Going back to my building blocks thought, Orlando has put things together in a very systematic order, despite the non-linear storytelling.  I just feel like it could have been written in a more engaging manner.

Felipe Wantanabe finally got something interesting to do besides designing alien landscapes.  There were quite a few well-needed action beats in this issue that allowed the art team to stretch their legs, so to speak.  While Wantanabe is a very capable artist, he has some room to grow when choreographing fight scenes.  There were a few instances where the flow of the action was jarring because of the lack of fluidity between the panels.  For example, Aut has Palmer in a choke hold from behind and then Palmer is immediately and inexplicably on the ground facing Aut.  Or Palmer goes directly from being struck in the back by Aut in one panel to facing him and grappling over Aut’s staff in the next.  The fluidity of movement isn’t there.  Once Wantanabe gets that down and tightens up some of his facial work I think he’ll be someone to watch.  Also, am I the only one getting a serious Onslaught meets Anti-Monitor vibe from Aut’s armor as The Null?

Final Thoughts:  Qualms aside, as the pieces of the puzzle come together, I find I’m enjoying this arc more.  The premise was intriguing to begin with, but the approach to the first few issues was sloppy and uninteresting.  The past few issues have dropped the split focus between the JLA “Away Team” and the rest of the cast, which I appreciate as the quick interludes were distracting, and brought more of the focus in on the real star of this arc – Ray Palmer.  Next issue will be the conclusion to the arc, and hopefully a few answers regarding what has caused the stability issues in the Mircroverse, as well as whether or not they are tied in to the overall Rebirth mythology.