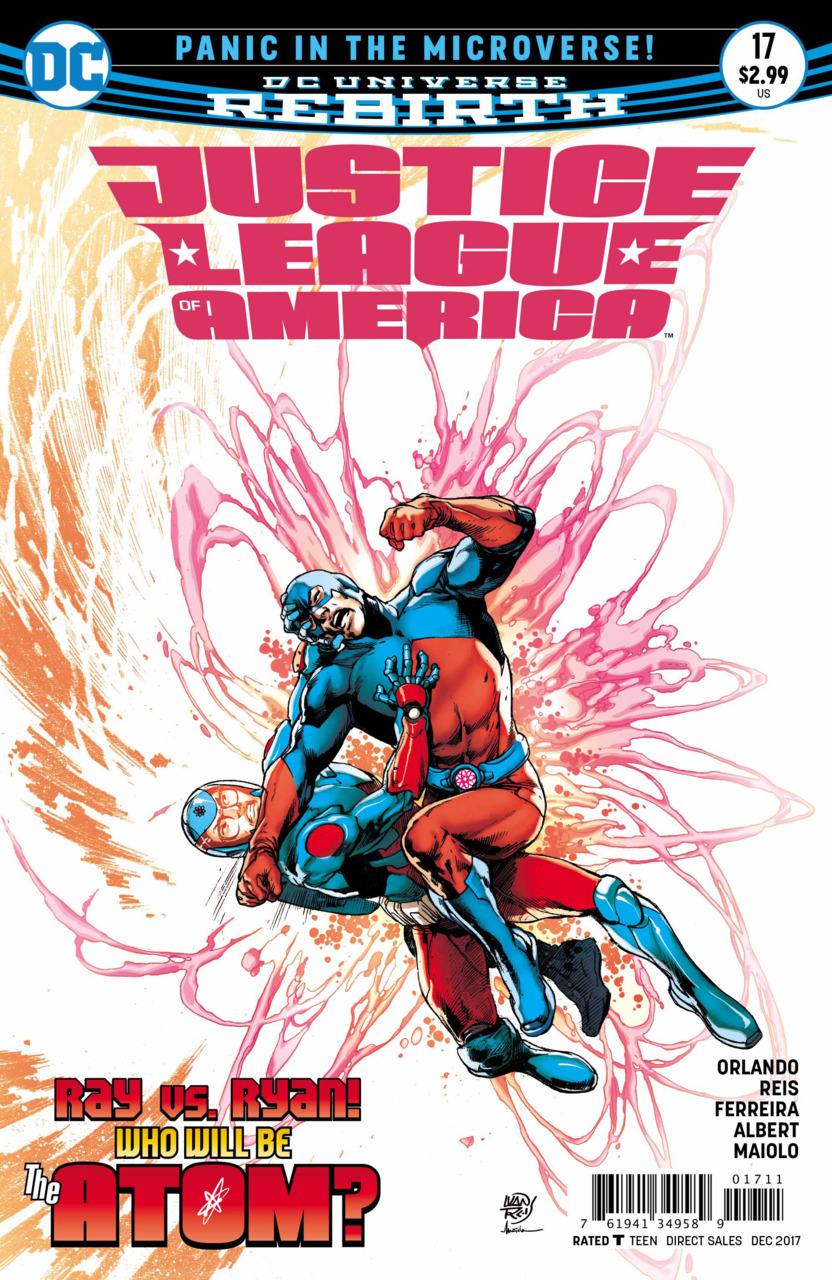 Overview:  Ray Palmer’s adventures in the Microverse have drawn to a close and the team is poised to save the day.  They just have to overcome scientist-turned-heel Dr. Aron Aut, who has dedicated himself to quickening the destruction of existence started at the Ignition Point.  We’ve seen everyone’s side of the story, and now that all the players are in place you might think it’s time for a knock-down, drag-out, Justice League caliber conclusion to “Panic in the Microverse,” but it seems writer Steve Orlando has taken a different approach.

Synopsis (spoilers ahead):  Now that we’re out of flashback territory, the closing chapter opens in the moments before the inevitable conflict between Dr. Aut and Ray Palmer, alongside a partial roster of the Justice League of America, including Batman, Frost, Lobo, and the Ryan Choi Atom.  Aut, ever the thinking man, has a different plan.  Using the bio-belt Palmer provided for him while they were colleagues, Aut shrinks the JLA to remove them from the playing field, then pushes his way through the Palmer and Choi before removing his armor and adding that technology to Palmer’s equipment.  Palmer explains that Aut has reconfigured his deep scanner to intensify the Microversal decay, hastening the destruction caused when an unknown force subtly cracked reality.  At a loss, Ryan Choi comes up with a Hail Mary play, directing Palmer to save the JLA while Choi himself risks his bio-belt rupturing by grabbing Aut and shrinking the two of the down even further.

Choi explains to Aut his theory that the waves of destruction are emanating from a single point, and if those blasts could be counteracted the decay could be halted.  Using his quickly rupturing bio-belt, Choi heads directly into the fissure, risking his life to stop the destruction.  At this point, Ray Palmer and Frost appear, pulling Choi out of the fissure as the bio-belt ruptures.  Back at the Ignition Point, Aut’s machine is destroyed in glorious Kirby Krackle and everyone has been brought back to their appropriate size.  Choi’s plan has been successful.  Palmer explains to Batman the cause of the fissure, something broke through reality, and directs him to look up at the proof, a giant blue hand in the sky.

Back on Moz-Ga, Palmer is reunited with Preon and has a long over-due heart to heart with Choi.  The gist of which, is that Palmer is impressed at Choi’s natural ability when it comes to being the Atom.  He’s been successful in ways Palmer was unable to be, and he endorses him continuing his costumed adventures, even creating him a suit like his own.  In a conversation with Batman, Palmer decides to remain with Preon in the Microverse for the time being, assisting with repairing the damage from the fissure.  He remarks that he found an abandoned workstation once maintained by Dr. Jay Abrams (AKA Blue Jay of the Champions of Angor, unseen since Flashpoint) who may be able to assist him.  Batman has heard of Angor and knows it to be in another universe, giving credence to Palmer’s theory that the Microverse may be part of the glue that holds all the universes in existence together.  At this point, Batman begins to tell Palmer some of his own theories about what’s going on, starting with the energy related to The Button.

In a quick epilogue, the team reunites on the surface world and Batman is brought up to speed by Vixen on what they missed.  Afterthought is still an issue and things are building up.  Meanwhile, in the Ghost  Zone, Afterthought meets with his benefactor, revealed to be a returned Prometheus.

Analysis:  That’s one way to end a story.  Instead of opting for the final showdown/throwdown between Dr. Aut and the JLA, Steve Orlando instead used the mind of Ryan Choi to science the hell out of the situation, so to speak.  My personal science background is, well, let’s just call it “limited,” so I can’t speak to how much the solution to the problem made sense, but it worked for my simple mind.  There was a hole in reality, they blew it shut with science.  A simplistic answer, but the end of problem nonetheless.  Oh, that bad guy?  We’ll just leave him shrunk down without a belt and that problem will take care of itself.  I don’t recall them resizing Dr. Aut, so I assume he was left to his own devices, which may or may not be murder.  The guy was attempting to end the universe, right?  On this level, Steve Orlando stuck the landing for this story, which was true sci-fi through and through, right down to the last scene.  It’s been a while since I read an adventure-style comic featuring the heroes of DC, so this was a welcome respite from the traditional fare offered by the company.

I suppose if I had a main ax to grind with this story, it would be that all the characters outside of the Atoms (and possibly Frost) really don’t matter to the story.  They are just along for the ride and contribute very little.  Moreover, the way they have been presented is so bland that if it weren’t for the delightful art of Ivan Reis and crew I’d have difficulty telling who was who.  I know this is a JLA title, but I can say with certainty this arc would have played out better if they had trimmed the cast and focused more on the Frost/Ryan Choi and Atom angles.  Speaking of the Atom, misleading covers are one of my biggest pet peeves in the comics industry, be it featuring a character who is barely in the issue or, in this case, featuring a fight that makes no sense and doesn’t even really happen.

The one thing I can say I desperately want is to have Batman assemble a cadre of the DC universe’s best scientists and get cracking on the big Rebirth mystery.  He’s now brought in both Barry Allen and Ray Palmer into the fold and discovered that someone has forced their way into the universe.  A big blue someone.  Maybe we’ll get more of that in the time period leading up to the end of Doomsday Clock, maybe we won’t.  I have to imagine that DC is leading up to Batman going deeper on the mysterious energy related to these events, and I’m looking forward to it.

Final Thoughts:  Orlando stepped up his storytelling game with “Panic in the Microverse,” but he still has a lot of room to grow in regards to writing for an ensemble cast. The bones of the story itself were solid, he just needs to find his characters’ voices, which I suppose will come with time.  He seems to be building towards an arc featuring more characters he has utilized in past books, so maybe that will bring a level of comfort to the title that I feel has been missing the past few arcs.