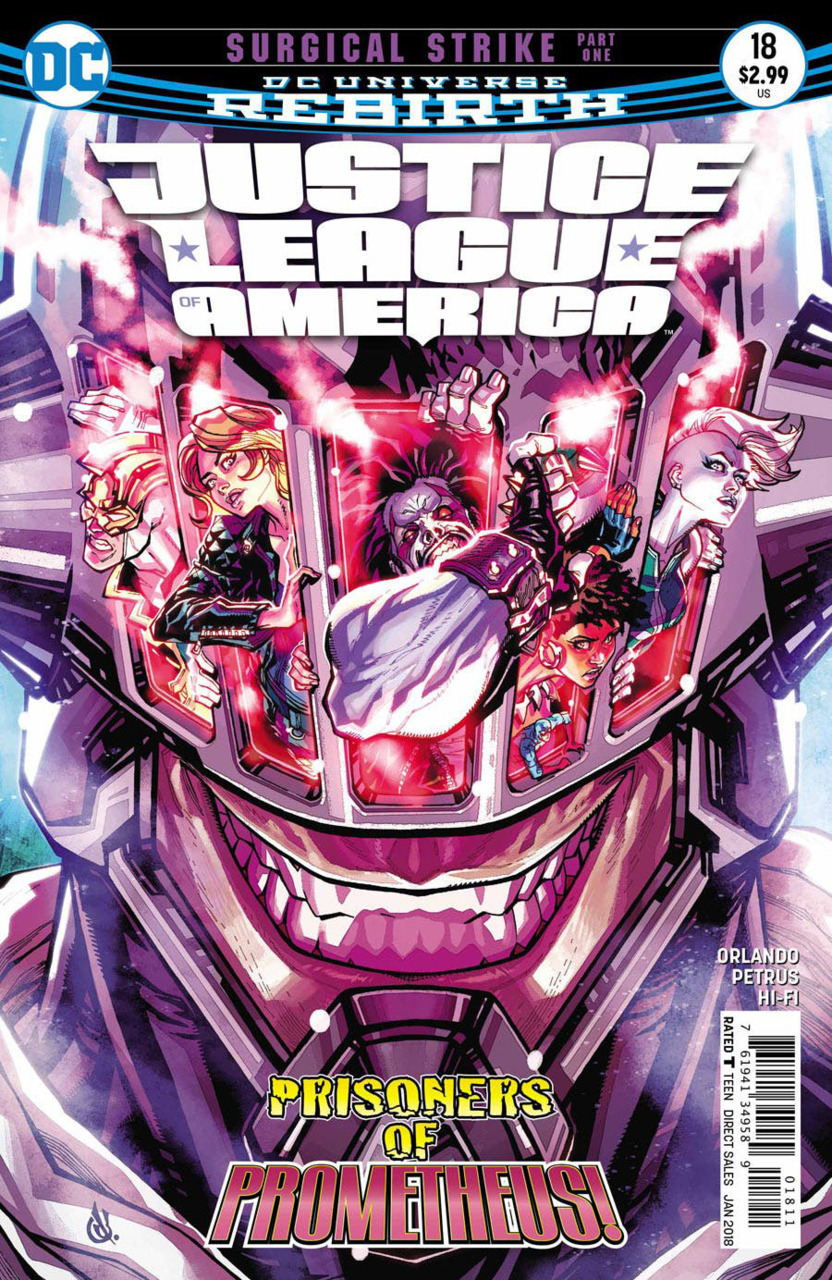 Overview:  After the team’s adventures in the Microverse, we’re back to the regular-sized, Ray Palmer-less reality we know and tolerate.  “Surgical Strike” kicks off with the team enjoying some much-earned down time back at their headquarters and wondering just where that Batman character has gone off to.  He’s left the team with no explanation, and tensions are beginning to mount thanks to some unnerving outside influences.

Synopsis (spoilers ahead):  As part of the JLA’s transparency deal with the public, their headquarters is open to visitors.  This includes documentary filmmaker John Porter, who guides us through his interviews with the various JLA members, promising to show the viewer a side of the League they’ve never seen before.  That’s not ominous at all.  Porter wastes no time cutting to the quick with his interviews, catching the team members off guard with his intense questioning.  He slowly picks at their insecurities and makes them second guess themselves and their status as heroes.  He questions Frost’s commitment to good.  He picks at Ryan Choi’s lack of experience and his budding relationship with Frost.  He makes Black Canary and Vixen second guess their worth to the team.  He gets nowhere with Lobo, because Lobo’s Lobo.  End of story.  When he gets to the Ray, things begin to get heated.  At this point it’s obvious that Porter has a nefarious scheme in mind, which comes to fruition when he goads Ray into lashing out, suggesting no one takes the team seriously and Batman has given up on them.  Ray makes a spectacle and quits the team in front of dozens of visitors.

In a brief interlude in the Realms of Chaos, Dr. Chaos (think Nabu and Dr. Fate, only blue) fights against an unseen adversary, who easily dispatches him and destroys his helmet before making some very threatening remarks about coming to the main reality and ruling there.

Back at the Sanctuary, the team is beginning to come apart at the seams as the seeds of doubt planted by Porter take over.  Vixen makes the decision to close the Sanctuary to visitors while they sort out what happened with Ray’s outburst.  The rest of the team makes plans to go after Ray and Porter himself begins to dismantle his disguise for his big reveal, while making allusions to himself being the reason Batman is off of the board.  The main gate of the Sanctuary is shut and the team splits up to determine what is happening while Vixen stays with the visiting public and attempts to escape.  Atom and Frost head to her quarters to investigate one instance of system interference while Canary and Lobo head to the gym to investigate a second.  Porter strikes at Atom and Frost first, incapacitating Atom by hacking his bio-belt and reducing his mass to effectively make him a ghost.  Frost is taken out by removing all the heat from the room, drastically weakening her.  Canary and Lobo run into Afterthought and engage him.  Meanwhile, the public is shown the JLA being manhandled as Prometheus makes his big appearance and faces down Vixen.

Analysis: So, Prometheus’ ruse was a little overly elaborate, wasn’t it?  Did anyone else get that feeling?  It’s a great premise to start the arc, but the overly theatrical portrayal of the villain’s cover identity was somewhat distracting when he took the fairly immediate heel turn.  It’s not that I didn’t like it, it was just a jarring transition that didn’t really land with me.  That being said, there was a lot to like in this issue.  It does a great job of setting up the forthcoming story while not giving too much away up front.  Orlando has found some of the character’s voices and things have started to gel into more of a team book than in previous issues.  It’s a little early to tell how well this arc will go over, but call me cautiously optimistic.

Hugo Petrus had a few solid moments on art duty, but overall his stiff characters looked uncomfortable on the pages.  I enjoyed the panel-work and I feel like he has a really good eye for page set-up and balance, but his execution of the actual penciling was lacking.  It looks like he’ll be taking us through this short three issue arc, so I’m hoping to see some growth from him.

Final Thoughts:  It may have been ham-fisted, but I love a good take-down story where a villain sneaks in and dismantles a team from within with frighteningly little effort.  The rebuilding that comes after that story is generally always interesting.  Again, I have an issue with Steve Orlando’s foreshadowing and focus as the two pages spent in the Realm of Chaos could have been better used to focus on the dismantling of the JLA.  The focus should be staying on the current story, especially with this being the first chapter.  This is a promising first installment of this arc, though.  As long as Orlando keeps everything even and has a good time with the characters I’ll be happy.