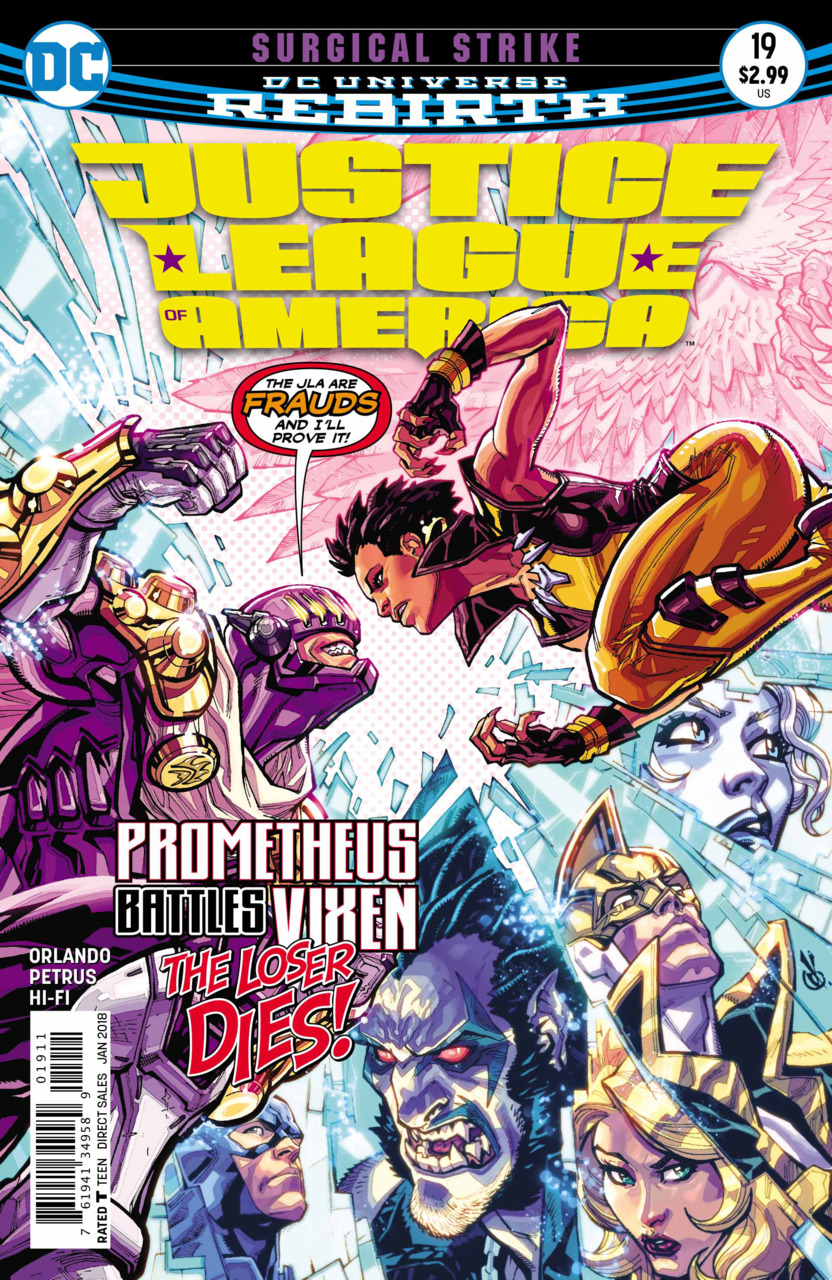 Overview:  The JLA more than has their hands full after Prometheus and Afterthought caught them off guard in their own headquarters.  They have been divided and seemingly defeated, but the team is going to come together and bring the fight back to their own terms, it’ll just take some work.

Synopsis (spoilers ahead):  Afterthought, with his precognitive powers, is facing down the unlikely duo of Black Canary and Lobo.  He easily uses his abilities and manipulates Lobo into inadvertently taking Black Canary temporarily off of the playing field with a wild attack, as Afterthought deemed her the greater threat of the two.  Lobo is none too pleased after being used and rushes head on into his attack, which Afterthought easily defends.

Meanwhile, Prometheus has confronted Vixen in front of the assembled civilians and muses on the reasoning for his assault on the sanctuary.  His peaceful family was killed by authorities, creating a deep resentment which he projects onto the JLA and other powered individuals who act as if they are the same as regular people.  The crowd begins to even murmur in Prometheus’ support, recognizing a form of idolatry that has taken place between the world and heroes.  Prometheus gives Vixen an ultimatum – destroy the Tantu totem, or he will kill her.

As Lobo and Afterthought continue their violent clash, Black Canary begins to awaken.  Afterthought chastises her for being a coward and allows her to slink away from the conflict as she is severely wounded after Lobo’s accidental attack.  Back in the Main Hall, Vixen and Prometheus continue their own verbal altercation as she explains to him that the heroes have been up against greater odds before and it doesn’t end well for the villain.  As Black Canary makes her way through the facility looking for help, she finds the Atom, who has had his density altered from a hack in his Biobelt.  He is able to pantomime instructions to her to use her canary cry to overload the Biobelt’s systems and restore him to his regular state.  After Canary reassures the fledgling hero who has begun to doubt himself, the pair then go after Frost, who has been left for dead surrounded by cold, preventing her from drawing any life-sustaining heat from her surroundings.  After saving her from the frigid trap arranged by Prometheus, they rejoin Lobo in the fight against Afterthought, freezing him in place and taking him by surprise for once.  Prometheus, however, seems to have planned for this eventuality, as he has rigged Afterthought’s suit to explode as the real trap, and the clock is nearing zero.

In the sub-story in the Microverse, Ray Palmer and Preon have teamed with Jay Adams (“Bluejay”) and the group has reached out to another multiversal entity, the Dreamslayer, from Angor.

Analysis:  There’s nothing quite like forced team dynamics.  We’re just about a year into JLA’s run and the team really doesn’t seem to have gelled together as much as I would have liked by this point.  I’m not sure if it’s the hodge-podge of characters pulled together randomly or the fact that the most interesting characters are pulled out of the immediate action.  There’s a problem somewhere in the story layout that needs to be addressed for this book to become the true success it has the potential to be.  Orlando is working on a much larger story that has slowly come together over several arcs, but if the build-up isn’t entertaining, what good is the eventual payoff?  The playout of this arc doesn’t live up to the premise for a few major reasons, but among the top would be the apparent jump in logic regarding Afterthought’s powers.  Maybe they just weren’t explained fully, but him being caught by Frost seemed too easy.  I like that it happened, but it was a missed opportunity for showing the team come together as a cohesive unit.  I don’t recall Afterthought’s abilities being limited in any manner, but showing how a coordinated attack from multiple angles could overload his precognitive abilities could have been an interesting plot point, instead it was another flat moment .

Hugo Petrus continues to do an acceptable job with his art duties.  There are a few problems scattered throughout the pages, but those can be chalked up to inexperience.  Petrus is a journeyman with a lot of credits to his name, but few meaty runs that help to develop consistency.  There are some facial expressions that don’t feel quite natural and at least one glaring proportional error.  Aside from those concerns, his characters move well throughout the pages and the panel layouts at least bring the story to life in a visually captivating manner.

Final Thoughts:  This arc has balanced itself securely in the mediocre after a promising start.  There’s nothing substantial here that we haven’t seen over and over before, and the villain is playing out like Jesse Eisenberg’s much-maligned depiction of Lex Luthor from the divisive Batman v Superman film.  It seems when writer Steve Orlando is playing things straight, the book suffers.  I’d like to see him get back to the more fantastical approach he took during the previous arc in the Microverse.  That was something to build off.