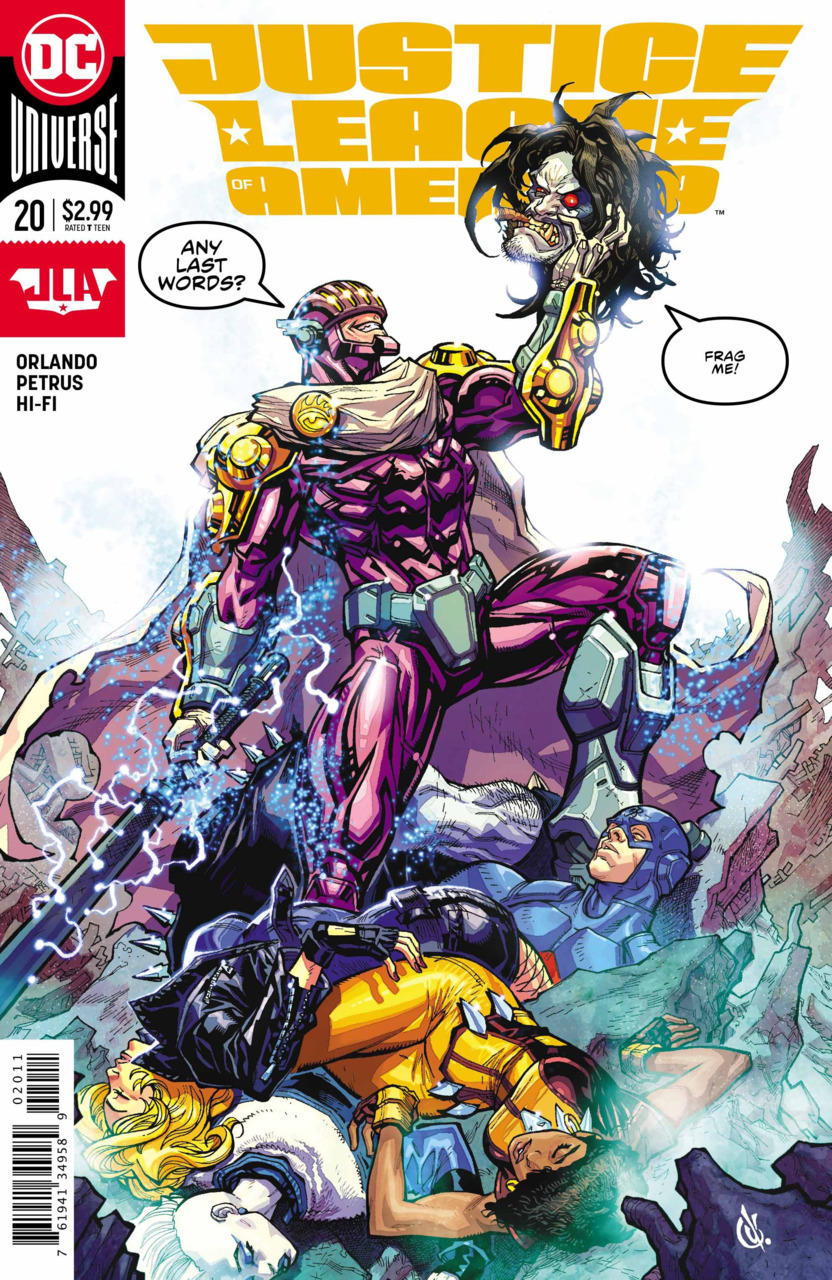 Overview: When last we left our heroes, everyone was in peril and things weren’t looking good for the JLA. As “Surgical Strike” comes to its conclusion, we get a number of resolutions and big action pieces, but how do they stack up against the rest of Orlando’s run?

Synopsis (spoilers ahead): Atom, Frost, and Black Canary survive the detonation of the bomb by shrinking to a miniscule level and hiding from the blast inside of Lobo. Back in the main hall, Prometheus seems to have the advantage on Vixen, but she is saved by unexpected support from the civilian visitors at the JLA’s base of operations. This interceding action buys Vixen time as the rest of the assumed-dead JLA join the fray. The unified team makes short work of Prometheus and Lobo reappears to put a damper on any chance of the villains escape. After the fighting, the team regroups to discuss the number of metaphorical elephants in the room, chiefly the ease at which Prometheus tore through their unity as well as Frost’s incident in the Microverse where she murdered a null soldier.

Frost further expounds on her actions, noting how things have been easier with the team’s support. While in the Microverse went sideways, however, she was at a stressful low point and gave in to her needs. She says she plans on owning up to her actions and returning to Amanda Waller’s supervision. Meanwhile, back in the Ray’s home town of Vanity, he and Xenos have continued their superhero actions and have gained the notice of a new, seemingly female, Aztek.

Analysis: This installment was a mixed bag. A lot of the things I had concerns about were cleaned up and we were given a much tighter story than in previous chapters. A great deal of fluff was stripped away and we were left with the bones of a much more interesting story. The exposition from Prometheus was well scripted and thought out. I like his approach to heroes as people who shouldn’t be trusted thanks to his own run-ins with authorities in the past, and I really see where he’s coming from on some level. The crowd turning against him was also thought-provoking and helped to nail down the “everyman” feel of the team the book has been trying to get at. The fairly tight nature of this closing chapter makes the entirety of the arc feel unbalanced, however, as we get no payoff to multiple Microverse interludes.

The art by Hugo Petrus continues to be serviceable. There’s nothing to write home about, but his rough patches are very obvious. The panel layout and flow was decent throughout, but a number of very rough facial expressions and character poses took me out of the visual storytelling medium. I’m ready for a break.

Final Thoughts: I like Orlando on this title, but I’d really like to see him get the chance to work with someone on his scripting. His plots are for the most part interesting, but the execution had been bland and the art hasn’t been solid enough to make me overlook the flaws. I am greatly looking forward to the next arc, though, as the Ray is one of the more interesting characters in the lineup.