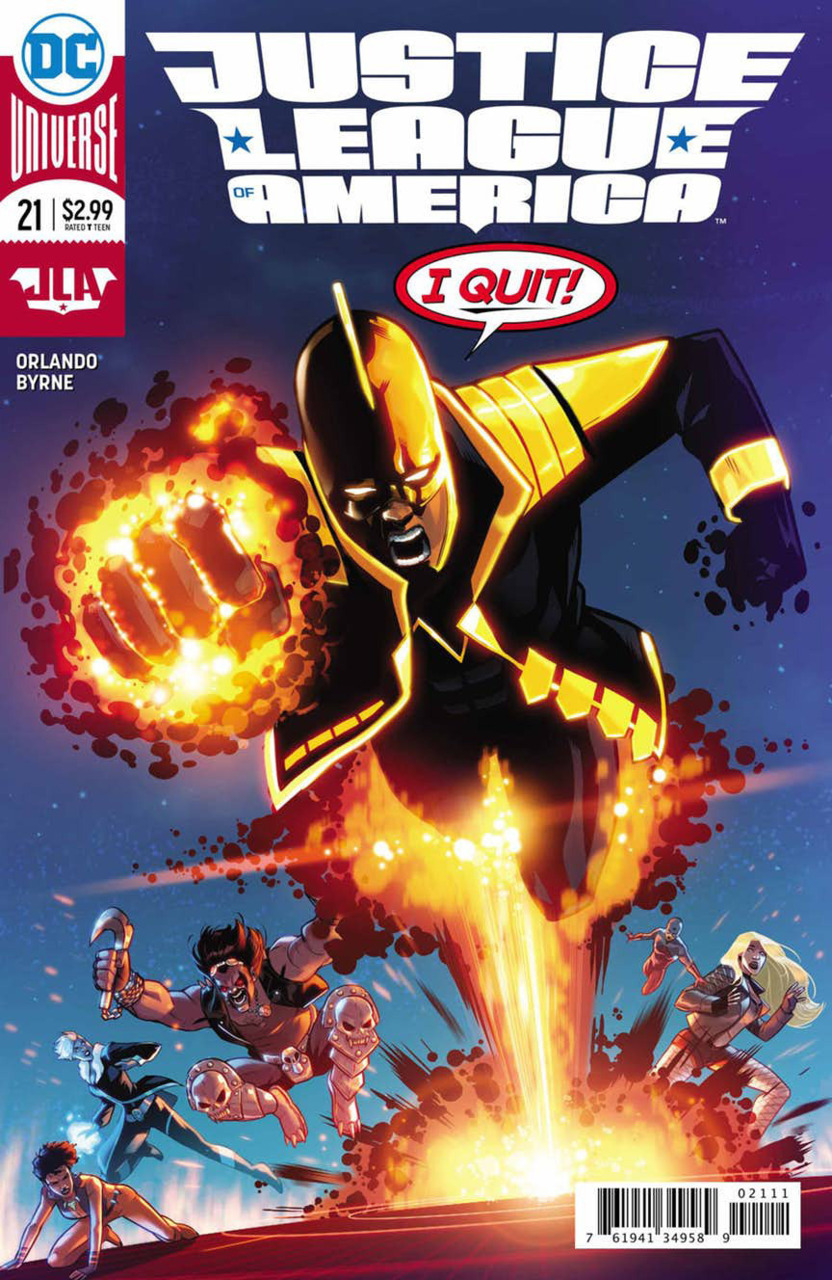 Overview: A few issues back, the Ray decided his time with the Justice League of America wasn’t working out like he anticipated, so he headed back home to Vanity. The JLA went on to battle Prometheus and Afterthought while Ray resumed his heroics on the local level. This installment details his adventures back in Vanity with his new friend Xenos who also skipped out on the JLA to be with Ray.

Synopsis (spoilers ahead): A week has passed since Ray and Xenos packed up shop and moved out of the JLA’s base at Happy Harbor. In that time, Ray has put together that another hero has been protecting the streets of Vanity with a more aggressive approach. Xenos has also begun to rethink leaving the JLA as he had made promises to help the team since they saved his life a few story arcs ago. Xenos makes it clear that he cares for Ray, but is going back to the JLA to fulfill his promise and that he hopes to see Ray soon. Ray meanwhile is at the scene of a back robbery with villain Mister Scarlet who was just stopped by the mystery vigilante when he received an alert regarding a hostage situation with members of the Sons of the Earth gang.

En route to the action Ray is waylaid by the mystery vigilante who reveals herself as the new Aztek. She is a software engineer named Nayeli Constant who found the war mask of Aztek, who died in space fighting God Tezcatlipoca. (See Grant Morrison’s 2000 JLA arc “World War III for the deep cut). Seeing all the information in the helmet led her to pick up Aztek’s crusade and defend Vanity. The heroes clash for several reasons, chiefly that Ray seemingly abandoned Vanity to join the JLA and Aztek’s brutal tactics. The pair puts their differences aside and joins together to deal with the Sons who are tied to the cult of Tezcatlipoca and rescue the SWAT team the gang has taken captive.

Inside the hostage situation, the leader of the Sons, Luminary, reveals that he is the son of the SWAT team captain and the police are really there as an execution squad. Before he can eliminate the police, however, Ray and Aztek make their entrance by sucking the light out of the room. The gang is surprised to see Aztek as they thought the hero was dead (another deep cut reference to Morrison’s short-lived Aztek book from the mid-90s). Ray gets the upper hand by confronting Luminary emotionally instead of physically, and is able to slow him down while the two discuss their similarities and differences. The SWAT captain, however, is only interested in ending his son, but Aztek knocks him out before he has a chance to.

After the action, the heroes have a heart to heart and find common ground. Ray assures Aztek he is back to help stand up fur Vanity after his absence and Aztek thanks him for doing what she could not – find compassion. She also reassures him that leaving the JLA was the right move of they didn’t recognize his value. Back at the JLA headquarters Frost had decided to remit herself to Amanda Waller’s custody and rejoin the Suicide Squad so as to avoid hurting anyone. That night, however, she has a dream encounter with the alluded-to force the Might Behind the Mirror and she wakes up cured of her powers.

Analysis: I love Steve Orlando’s take on the Ray and I can’t be happier that he’s finally getting the spotlight after being criminally under-used for the past year. He’s interesting and layered in a much more three dimensional way than the other JLA members, perhaps with the exception of Frost. That being said, his motivations could stand to be fleshed out more. I somewhat understand his beef with Batman and the JLA, but it all comes across on the petulant side. I’d really have liked some more drama and build-up to him leaving to flesh out the story and get me more invested. Instead, I’m getting a feeling more akin to just going with the flow of the narrative. Ray and Frost’s stories should be the emotional core of the book. Having both Vixen and Black Canary feels redundant and Lobo is ridiculous to begin with. Orlando has a lot of great parts to work with, and I have high expectations for this book due to his caliber.

The references to the post-Crisis DC stories of fifteen to twenty years ago brought a smile to my face. I was expecting a much more convoluted approach to Aztek’s backstory so I was taken aback by the simplicity of it. It harkens back to a much different method of storytelling from the Golden and Silver ages, the direct approach we don’t often get anymore. It was refreshing. I really enjoyed Orlando’s take on Grant Morrison’s character and I hope we see more of her in issues to come.

The art from Stephen Byrne was solid throughout, but I feel he had more success with his approach in the JLA Ray special from January 2017. I still love his interpretation of the character, but I would have liked to have seen more of him experimenting with Ray’s powers which are perfect for showcasing some captivating imagery. When he’s in full Ray form, I want it to get wild. We get a taste, but I want more.

Final Thoughts: This was a fun interlude that I would have liked to have seen expanded upon. There was a lot of ground covered in this installment and I think some of the heavier story beats would have had more resonance if they had gotten more room to breathe, especially the build-up to the reveal of Aztek and Ray’s relationship with Xenos. That being said, we’re getting closer to the big arc Orlando has been building toward, and I’m starting to feel the excitement. This issue was a step in the right direction that this title desperately needed.