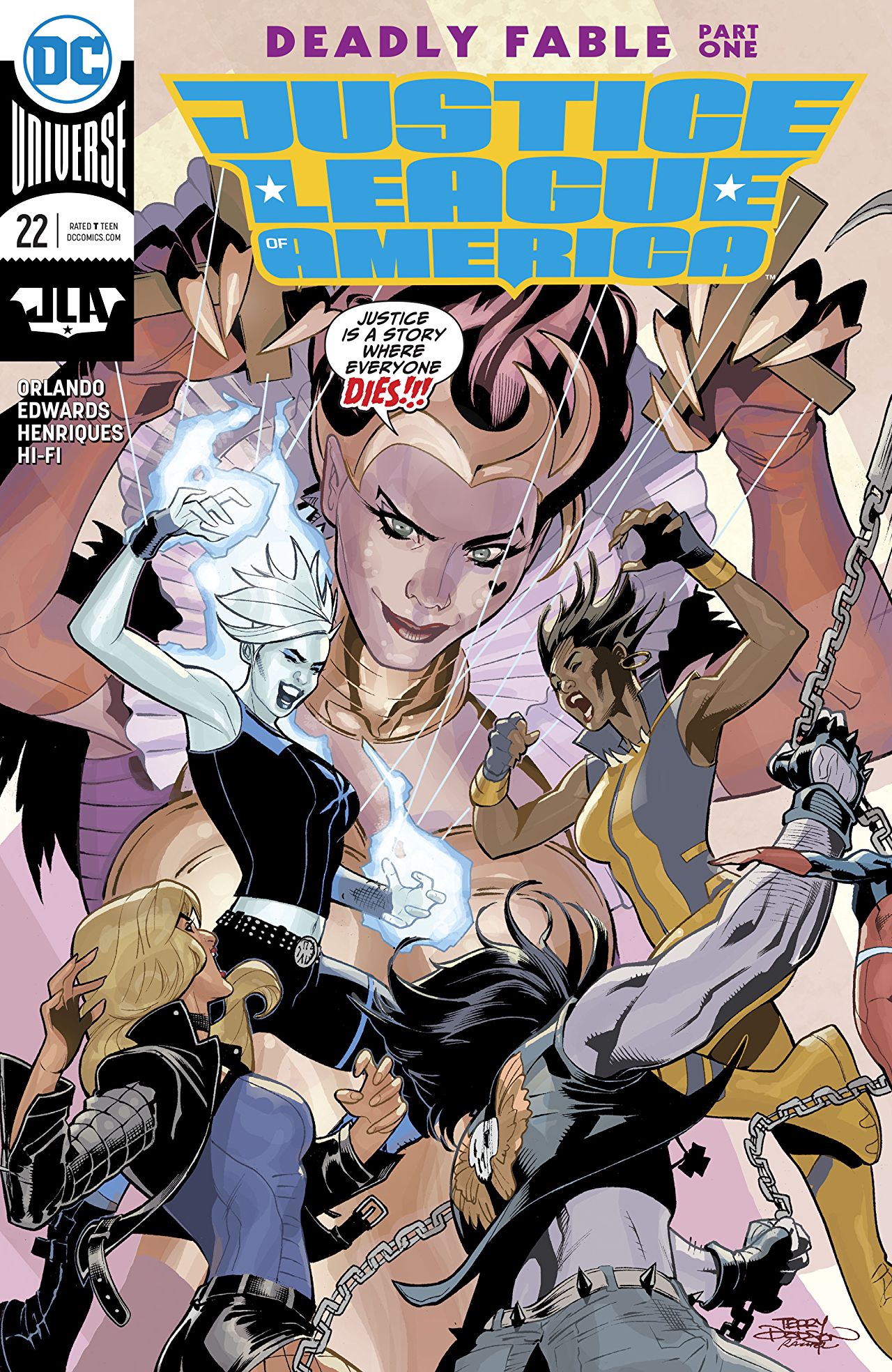 Overview: Caitlin Snows hears a person in her head who comes out to play and wreck the JLA.

Synopsis (spoilers ahead): Caitlin, in her dreams, hears a voice stating that if Caitlin’s hunger is left unchecked, that she would turn the world into a frozen apocalypse. The voice offers Caitlin a cure in exchange for a future favor.

Caitlin surprises the JLA after being cured of her meta-human abilities. While most of the JLA does not mind, Dinah is frustrated thinking Caitlin lied to the team. In the middle of this argument, Caitlin is saved by an incoming alert into the Sanctuary.

After this alert, Caitlin falls to the ground in pain and Tsaritsa (yes, that is her name) emerges from her subconscious. After quickly taking out the JLA, Tsaritsa blows us the Sanctuary. The people of Happy Harbor are dumbfounded and afraid because the JLA has been utterly defeated.

While being carried by the woodsmen, Tsaritsa shares with Caitlin her plans for absolute rule.

The imprisoned JLA, walking behind the processional, are told by the crowd that if they were defeated then who was going to save the citizens of Happy Harbor. Mari tells the crowd that they are going to be the ones who save them. Mari then rips out of her bonds, losing a hand in the process (I know, awesome!), and attacks the woodsmen who are in service of Tsaritsa. One handed, she takes out nearly all these men. But she is then engulfed in a massive explosion.

Meanwhile, Ray is in the city of Vanity taking on three devils. These devils tell Ray that their powers have increased, and Ray takes on this challenge.

Synopsis: This Caitlin Snow centric storyline allows us to better understand the psyche of Caitlin. Being apart of the JLA has allowed her to channel her powers to save humanity. Almost like Clayface, Caitlin is (or desperately trying) to be a good person, yet her powers have caused her to hurt people. Caitlin’s hunger for energy (in the form of absorbing heat from all things) causes significant damage if used excessively, as shown in the dream Tsaritsa gave her.

How many of us would exchange a chronic pain for a cure? Many. I know I would. This makes this issue and the character of Caitlin tragic. She is trying to find solace yet exchanges her cure with a prison escape of a maleficent queen.

I am totally surprised by her quick and easy defeat of the JLA. Their HQ was blown to bits, Mari is seemingly disintegrated, and the JLA were soundly defeated and Tsaritsa only grows in power. This team seems like they will not have the strength to defeat Tsaritsa given their predicament.

I felt that the B plot of the Ray in the middle of this issue was out of place. I really did not know why that one to two pages of his story was in this issue. I could not have his arc in this issue and build it up in future issues or make his arc a back-up in this issue. Why break up a good plot when you do not have to?

Steve Orlando does a great job writing this issue. It is often quite hard to write dream sequences and immediately transition to present day narrative, he managed both wonderfully. His portrayal of a redeemed Caitlin Snow, who was a scientist accidentally turned into a super villain, struggling to live a normal life is relatable to many people. She did what she thought was right, but her actions had consequences. In real life, all actions have consequences, thus it is about how we react to those consequences that define who we are.

The art team does a fantastic job. The colors are vibrant, the art is crisp and clean, and this issue is extremely beautiful to read. Each character looked like themselves. I also appreciate a guest appearance of the Batman Who Laughs; he and his pet Robin looked as if Greg Capullo drew them himself.

Final Thoughts: If you like Caitlin Snow and the utter decimation of the JLA, this is the issue for you.