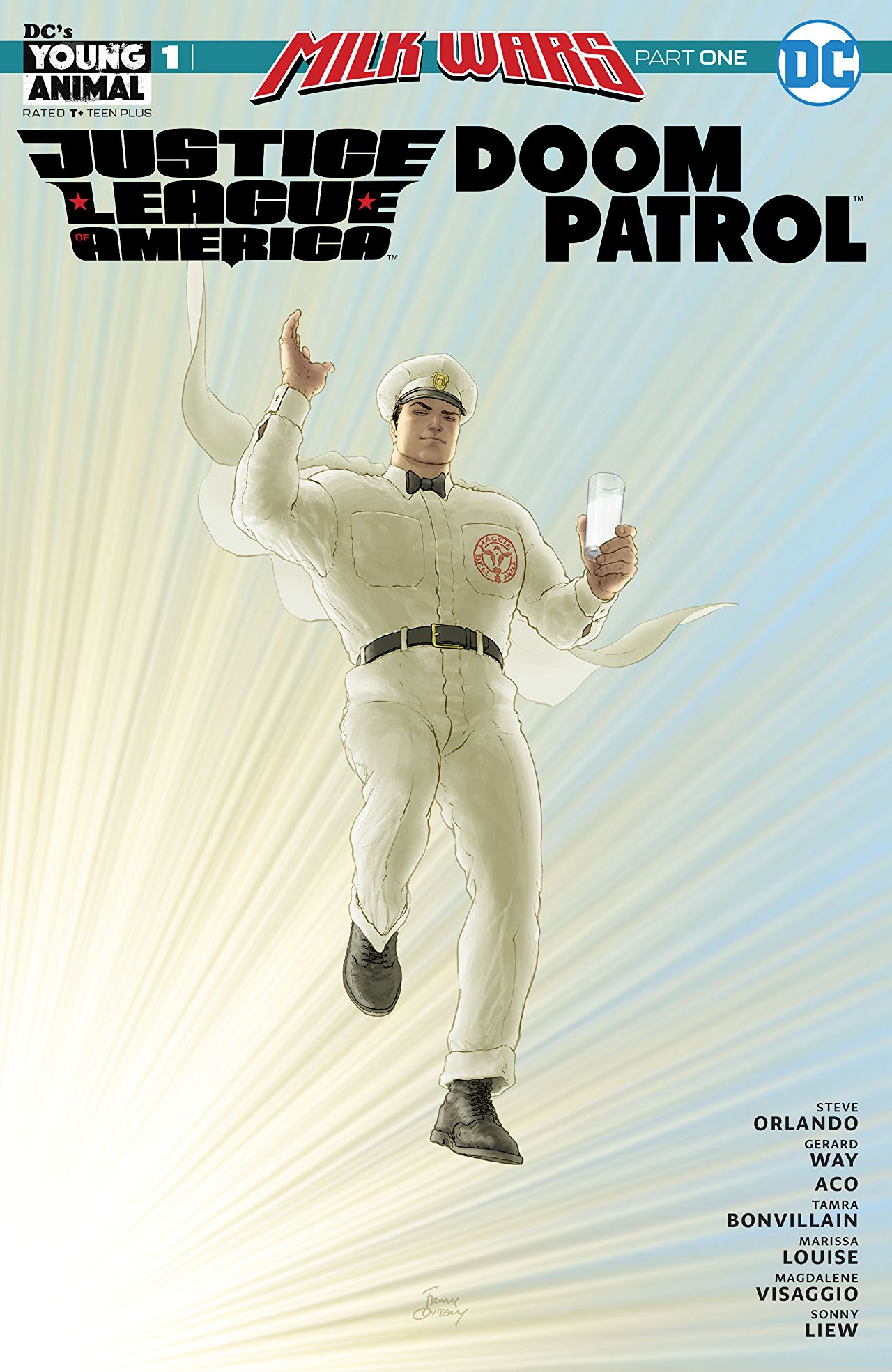 Overview: RETCONN is looking to sell off some of their world simulation properties, one of which is Happy Harbor, Rhode Island. The Doom Patrol shows up in Happy Harbor to find an overly perfect town full of Stepford-people, some of whom are dead and others who are drugged into compliance.

Synopsis (spoilers ahead): Lord Manga Khan is being shown a completely fake world that the fine people at RETCONN have created on Earth Prime. RETCONN is reporting progress for the people/person/company/extra- dimensional-being that Khan represents.

Here we are in Happy Harbor, Rhode Island. The milkman, Milkman Man, is a strapping fellow in a white milkman suit. Milkman Man is on his morning rounds. Only instead of leaving the morning milk he kills a family and goes on his merry way.

Suddenly, the Doom Patrol arrive on the scene. Apparently, RETCONN had fired a rocket at this town. Someone presumably stopped the said rocket. They are here to see why a rocket was sent to this place.

They go to the house that had been attacked by Milkman Man and find some crazy alien-egg looking udder pods in the house. Neighbors rush in and try to get rid of the strangers, they have also called the Neighborhood Watch. Carl Lobo, head of the watch, asks what the team wants and is physically rebuffed by Robotman. Turns out Carl isn’t a pushover and Robotman ends up on the ground.

The RETCONN manager explains to Lord Manga Khan that to simulate reality they had to create fake superheroes to replace the ones in the ‘real world’. Milkman Man is a takeoff on Superman. Also, the people in the community are controlled and made compliant through something in the milk.

Back in Happy Harbor, the Community League of Rhode Island, a crew that looks like the snappiest dressers in the PTA, arrive to investigate the disturbance. Fighting between the Happy Harbor teams and the Doom Patrol commences. The Happy Harbor team members have ‘real world’ superhero counterparts, Killer Frost, Lobo etc. They confront Milkman Man with comic book images of Superman. He can’t understand why Superman has his face but is different otherwise. They try to explain that he was created by RETCONN. He gets confused and says that he was born Nothing and was grown by RETCONN. Casey realizes that since she is the only one to give birth to Nothing, that Milkman Man is her son.

The milk dosages wear off the populace and the Community League of Rhode Island transform back into the Justice League of America. They chat amongst themselves and claim Milkman Man has a lot to answer for. Milkman Man is very upset and is humiliated. He flies off into space in super-luminal speed and disappears. The Doom Patrol explains that the community had been hypnotized by the milk. The Doom Patrol had previously defeated RETCONN who was trying to create a fake reality. They are now selling that reality off piece by piece.

Now that Milkman Man has disappeared and the Community League has remembered that they are the Justice League, the two teams get to know each other. Also, an eyeball from space arrives and transmits a hologram of Cave Carson saying that he and Swamp Thing have located the extra-dimensional location of the home office of RETCONN. The two teams combine to go off to defeat RETCONN for good.

Analysis:  Before I begin I have to admit that I am not a regular reader of the Young Animal’s Doom Patrol, just the first few issues back when it first released. I do like wacky meta-stories though as long as they keep things light and the plot moving along.

Writers Steve Orlando and Gerard Way give us a story that straddles the fine line between fascinating and unreadable. The art is by ACO, one of the (amazing) artists on Steve Orando’s Midnighter series, with Tamra Bonvillain and Marissa Louise on colors and Clem Robins on letters.

The art, in general, is clear and simply constructed. If the story wasn’t so crazypants bananas you might think this was a pretty normal book. The page introducing the Doom Patrol is very well drawn,  capturing the group as they assess Happy Harbor. They are a nutty group of heroes and well worth knowing. Also, the page showing the Community League of Rhode Island was also very dramatic and powerful. The best pages, though are some of the fight scenes. ACO and team do an amazing job showing the kinetic madness of the fighting as well as some absolutely beautiful abstract spreads. Punches and kicks result in sound effects on the page, like in the Batman ‘66 show but on steroids.

There are a few confusing plot points, many of which could probably be answered if I had been reading Doom Patrol. What is RETCONN upto trying to sell this town to Lord Maga Khan? Why did they send a missile to destroy it? What is the purpose of this town experiment? Where the superheroes that were in the town really the JL on the special milk?

Those problems notwithstanding, this was an entertaining book that I read through a few times, and not just because I had to for this review (although I did that too). I am not going to give this book a very high score, but if you are a fan of Doom Patrol and like the wacky and bizarre, then I do recommend that you check out this first issue of Milk Wars.  It does make me want to catch up on the YA Doom Patrol, so that is saying something.

Final Thoughts: This first installment of Milk Wars is a bizarre story that manages to resonate emotionally with a weird story and wacky characters that exist in a meta-world. A little patience on the part of the reader will go a long way in enjoying this tale.