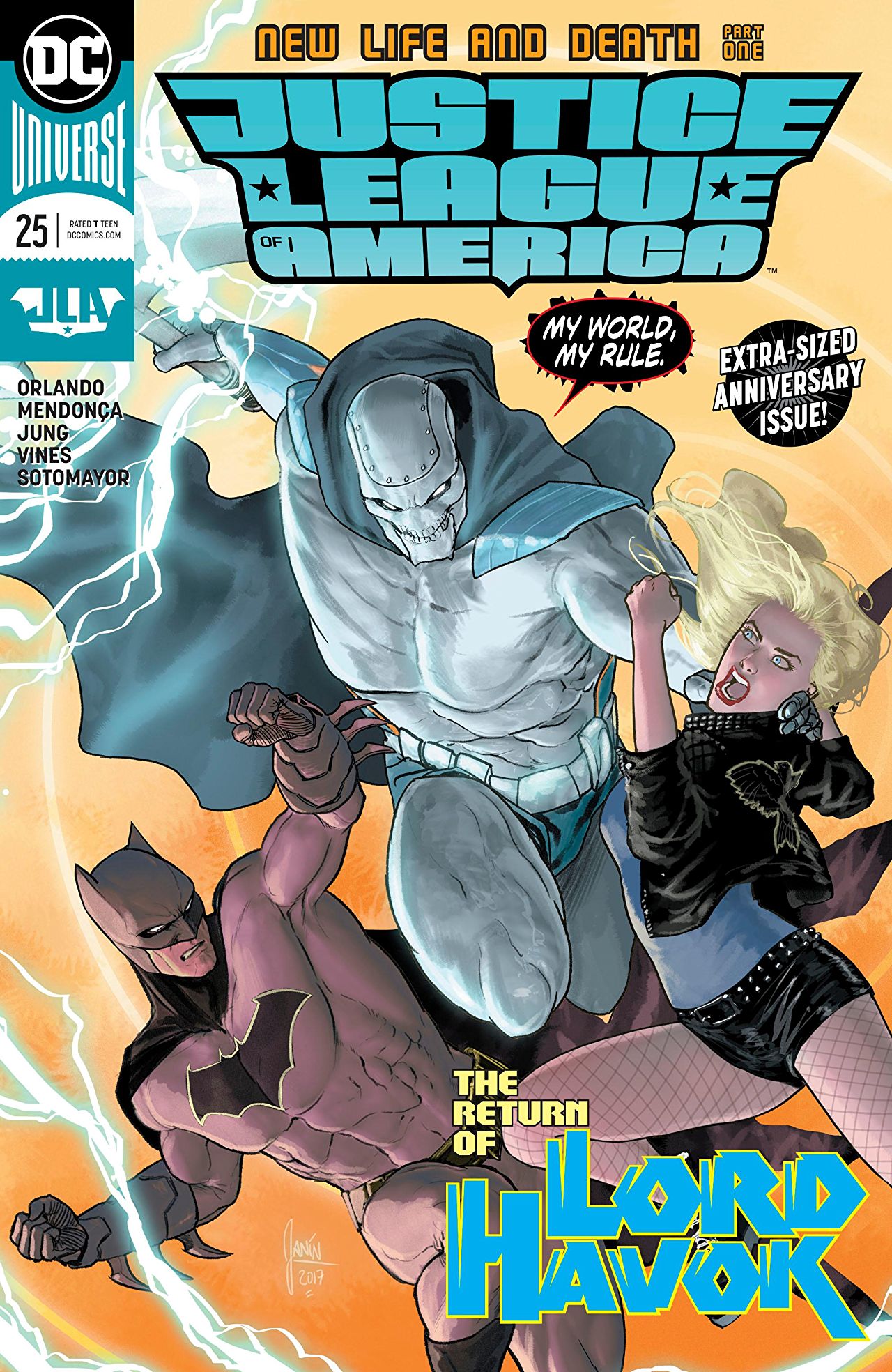 Overview: Batman, Black Canary, and Dreamslayer travel back into the microverse and recreate Angor.

Synopsis (spoilers ahead): The issue begins with Bruce and Mari looking at the wreckage of the Sanctuary (read the last issue) and discussing their plans to rebuild it. With Bruce being gone for the last arc, Mari tells him a few new plans of what this team can be.

The Ray abruptly – well annoyingly – enters the fray and introduces Nayeli (code name: Aztek) to the team. She has been operating in Vanity with The Ray. He thinks she would be a good addition to the team due to her engineering skills and abilities.

Bruce gives a monologue on the future and purpose of the JLA. He talks about how he knew that the worst was coming: Barbatos, Tsaritsa, and other threats. He knew that people would doubt his image and reputation. The JLA would be a response to that doubt; they would bring hope to the world.

He shares that his final mission is to save Angor. Right on cue, Dreamslayer appears. Bruce tells them that he sent Dr. Palmer into the microverse to find Dreamslayer, and with Dreamslayer’s help, Bruce is going to rebuild Angor.

Dinah instantly questions and critiques his plan. She questions, “You [Bruce] are going to play God and you want to do it alone?” She reminds Bruce that he asked her to be on the team to bring integrity to the team. She emphatically rebuffs him and states that she is going to go with him and Dreamslayer to keep them honest.

In the causeway between Earth and Angor, Dreamslayer shares his story with Bruce and Dinah. When the thaumic (editor’s note: this word appears to be defined as an element of magic, though a very uncommon word which doesn’t appear in any normal dictionary and actually appears in the issue) warhead exploded, the blast disintegrated him. By a miracle, he was reconstituted as Dreamslayer. He fought alongside Havok against Angor’s heroes because he wanted to bring order to his home. With The Ray’s help, he realized that utilizing force will not bring a true peace, that there is another way. The Ray inspired him to recreate Angor, but in these endeavors, he attracted the attention of something more powerful than him. This mysterious figure was inhibiting Dreamslayer to recreate Angor.

Dreamslayer identifies this mysterious figure as an Adjudicator. The Adjudicator reveals himself to the squad as the final judge of the worlds: he judges them to live or die. Angor’s is sentenced to die.

Dreamslayer argues that Angor did not have to be what it once was; with the help of Black Canary and Batman, they can help create an Angor without the problems it once had.

He reveals that Batman had a plan to restore Angor: He sent Dr. Palmer to find the survivors of Angor. He followed a survival beacon to meet with the Dr. Abrams (code name: Blue Jay). Abrams shares that he escaped his planet via a quantum tunnel to “miniscula.” Palmer tells him that they call it “The Microverse,” Abrams jokingly admits that their name is better than his.

Dreamslayer continues and says that Palmer sent probes through the quantum tunnel that Abrams used. While battling the Adjudicator, Dreamslayer heard the probes and followed their signal. Abrams shares with him that Batman had a plan for Angor.

Palmer thought that the same thaumic energy that created Dreamslayer could be used to recreate Angor. But, he admits that he did not want to recreate Angor, but make it better than it was. With Batman’s and Canary’s help, they could help make remake Angor.

The Adjudicator tells them that even with their help, Angor is still doomed to perish. After a swift confrontation with the Dreamslayer where the Adjudicator disarms him, Bruce makes a case for Angor. But, Dinah interrupts him. She argues that their mission is not right. She chides Bruce for thinking that even with the removal of Havok, Angor’s problems would cease. She argues that they cannot control every variable. Even if they remove Havok, they could not control what might happen. She tells him that if they rebuild Angor, then everyone deserves a chance to be apart of it. Havok should be punished for his crimes, but they should recreate the planet with him. She questions their authority to dictate who gets to be apart of it and who does not.

Dreamslayer politely disagrees with her and agrees with Batman’s point of view. At that moment, Dreamslayer writhes in pain. He seemingly is ripped apart and Havok enters through a portal where Dreamslayer’s body was.

Analysis: Let’s start with the art.

I felt that the art is the best part of the issue. (Well, this run of JLA has had solid art.) The art team did an incredible job of portraying each scene and the world the characters were apart of. This issues starts in Happy Harbour, continues in a ravaged Angor, flashbacks to some planet inhabited by obscure creatures, and ends back on Angor. And with the detailing of Dreamslayer and Adjudicator on top of drawing the JLA, this art team did a fantastic job!

A note on the cover: I felt that Janin did a wonderful job (like all of his art). This cover is unlike others I have seen before where either it is a cool, eye-popping page that is somewhat connected to the story but not apart of the issue itself or it is art lifted directly from a panel. But, this cover has Batman and Black Canary punching Havok. It seems that the cover is the last page of the issue. I find it very intriguing and refreshing.

I felt that Steve Orlando’s plot is confusing. I, frankly, did not understand Batman’s agenda.

What authority does he have to recreate a world except for one person? I feel like that would go against his moral code. He is not murdering someone per se; he is just not making them alive. To me, his argument is analogous to those who say he should kill the Joker. Yet in that conversation, he says that each man deserves rehabilitation. Why can the Joker be allowed multitudes of chances to change (and multitudes of chances for him to escape) but not Havok?

I also did not understand how he wants to play god right after dealing with Barbatos (remember that the last issue corresponds to the end of the Metal event). He tried to play god and look into the Dark Multiverse which caused the Metal event to begin with. It seems like he did not learn his lesson in unilateral decisions and is seemingly repeating those same mistakes.

I appreciate Dinah as the voice of reason of this team and fearlessly calling out Bruce for his arrogance and recklessness. In this issue, I think that she is right. If they remove Havok from the equation, another person might fill his role. You cannot guarantee perfection. There will always be good and bad, justice has to take its course.

I also felt that Orlando did not flesh out who the Adjudicator is. From reading, it seemed that there are others and that he existed outside of the multiverse and enters to render judgment. To me, this seems what Dr. Manhattan would do. I just want more information on the Adjudicator and his overall role in the DC Universe.

I like Orlando’s writing overall and he wrote a solid issue. I really liked how he wrote Dinah, but after reading this issue, I left with more questions than answers. Hopefully, Orlando will answer all those questions in the next issue.

Final Thoughts: Read this if you love Black Canary brutally calling out Batman on his behavior and motives.