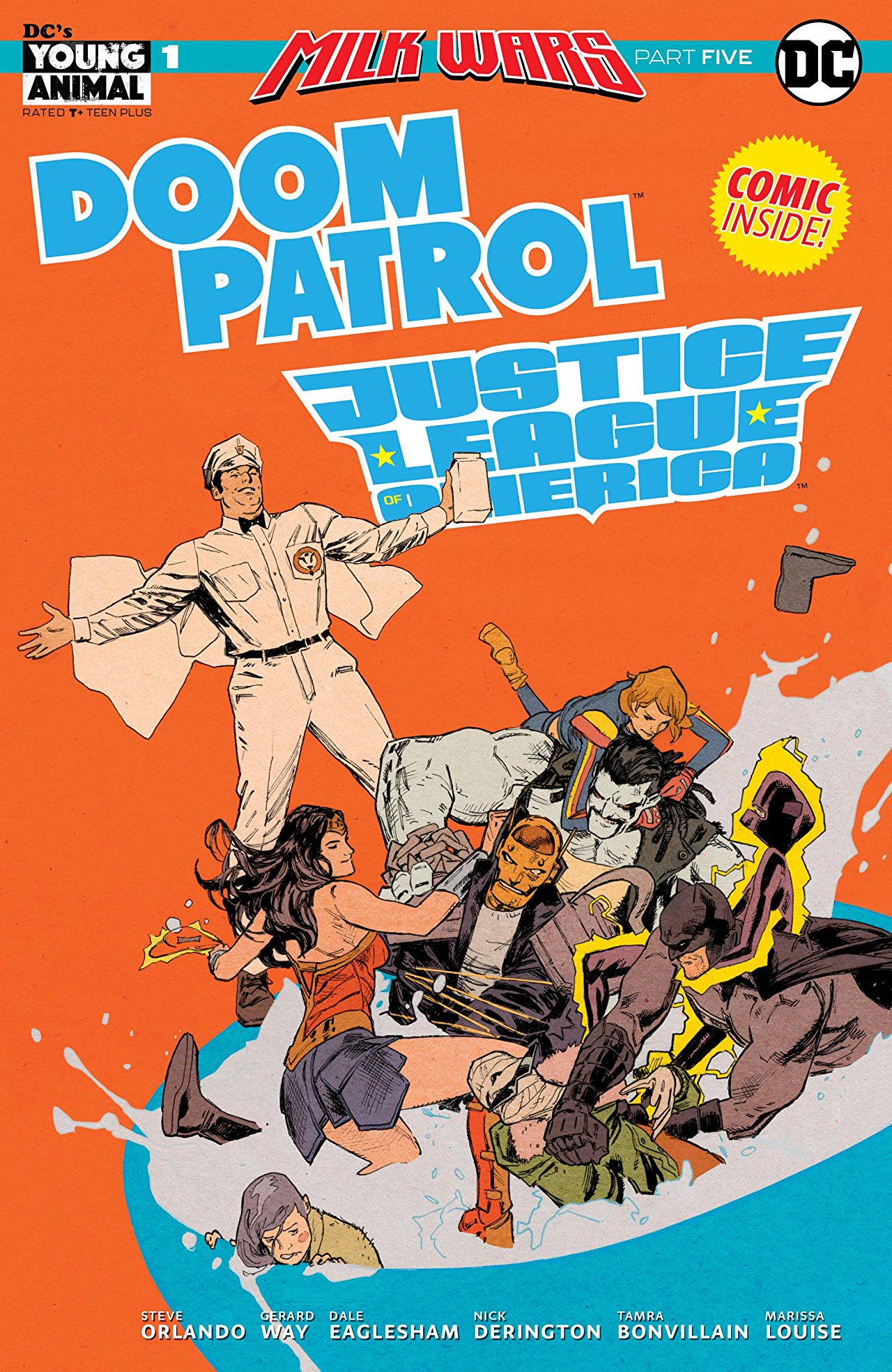 Overview: RETCONN, after failing to sell the Prime Earth, tries to end reality, but Elasti-Woman saves the day.

Synopsis (spoilers ahead): This issue begins with Rita Farr (codename: Elasti-Woman) being prepared to be crucified.

The camera pans to the RETCONN offices where Cave Carson is being interrogated by the Milkman Man. He asks where Swamp Thing and Carson’s family are. Carson refuses while Milkman Man tears his ear off. At the moment, Carson’s cybernetic eye returns and the JLA and the Doom Patrol enter the fray. They battle the Milkman Man while Batman frees Carson from his restraints.

Throughout the battle, the heroes try to convince Milkman Man that he is a victim of RETCONN. Yet, he refuses to accept that truth and unleashes his anger on the heroes. Wonder Woman confronts him and says that he deserves love and care, not the treatment that RETCONN gave him. He rebuffs and states that he does not need that, and he brought help. At that moment, the RETCONN soldiers (mutated bovine shock soldiers) appear and battle the heroes.

The camera then moves a few floors up where RETCONN executives and Lord Manga Khan are negotiating the sale of Prime Earth. Khan notes that the value of Prime Earth is falling due to the heroes and their interference.

We then pan back to the crucifixion of Rita. As the solar spikes drive through her hands, she tries and fails to remember her past. In her final moments before her death, she receives a vision about her life and how she has powers.

Back at the RETCONN offices, the heroes battle Milkman Man and the bovine soldiers. As he faces off with Wonder Woman again, his mother – Casey – tries to calm him down. She tells him that RETCONN used him and created a false father so that he would be loyal to them. She shares that she and her wife are his true parents and that he does not have to lash out against the heroes.

Upstairs in the executive offices, Khan and RETCONN management are still in negotiations. Khan calls his superior to discuss whether he should help RETCONN deal with the heroes in exchange for a no-cost Prime Earth. His boss declines the offer and Khan teleports away.

When the heroes bust into the offices, a RETCONN employee activates the fail-safe plan, the final refresh button. This weapon will wipe reality clean like a magnet to a hard drive.

Upon the cross, Rita gathers her consciousness and states that she is in everything.

With reality coming to an end, Milkman Man and Casey have a heart to heart and Milkman man rests his head on her shoulder with tears streaming down his face.

Batman comes up with a plan to save reality (because Batman has a plan for everything). He tells Flex Mentallo that he needs to use his flex powers to alter reality. Vixen and Jane help Flex Mentallo control his power of Inflation Intensity that he says might save reality.

The camera changes scenes to a woman stepping out out water who mutters that she can see all and that she is in everything. We learn that this is Rita and she has “rebooted” reality.

The heroes, at Happy Harbour, realize that their adventures with RETCONN and the Milkman Man feel like a dream.

Casey walks toward the water mourning the loss of her son, Milkman Man, for he was not reconstructed in the rebooted reality. Wonder Woman comforts her by saying that “holes in our hearts cannot be named Casey, but we may yet find ways to fill them.”

Analysis: The art in the in this oversized issue is impressive. This issue is packed with intricate and complex scenes that require the utmost of attention and skill.

The scenes with Rita being crucified on the cross are like stained glass murals in churches that illustrate stories out of the Bible. A crown of worms is analogous to Jesus’ crown of thorns. But goodness, it is way creepier! There is one scene where she is on the cross and it looks like we are watching a 3D movie without the glasses; it is subtly blurring that it gives that scene more weight.

In the other scenes with the heroes at the RETCONN offices, so much action happened that I am surprised they are able to get it all on a single page (or two-page spreads). I feel that although there is a lot going on in those scenes, it never feels too dense nor distracting.

My only “complaints,” if you want to call them that, are the faces and the scenes at Happy Harbour. To me, the faces looked off throughout the story. And at Happy Harbour, it seems that the art team completely changed. The art at the beginning is not like the art in the end; it is slightly jarring.

Overall, I thought the art is well done for all the moving parts that are going on.

Between the laughable milk puns, repeating Milkman Man dialogue, the awkward voicing of characters, some sexism and misogyny, weird flex-based reality-bending powers, and a woman’s crucifixion saving the world, I am not sure what to make of this issue.

One Grant Morrison’s map of the multiverse also appears; I always love when stories can reference it.

The plot is all over the place and at times nonsensical, but that is not a serious issue for me. I like it for the action and the other subplots plots.

I really like the side story of how Milkman Man feels that he is nonredeemable due to allowing himself to be used by RETCONN and Casey telling him that it is not his fault. For many readers who have been manipulated and used, this resonates with them. Even in my own life, situations in my youth occurred where I felt it was my fault for allowing someone to take advantage of me. It took a good friend to remind me that those in authority were responsible, not me.

Another cool subplot is the relationship between Cliff and The Ray. Cliff realizes that he is fan fiction come to life. When reality reboots, he will not exist anymore. He laments that his existence is for nothing for he is a character in a comic book. Ray admits that without comics and movies, he would not be who he is. He is giving a meta-commentary on why comic heroes are important. As comic readers, we are encouraged by the hope and courage that superheroes have. They give us the strength to carry on each day while facing life’s problems. There are still even times where I draw strength from the resiliency of Batman and I am an adult!

Despite the crazy plot, I really like the issue due to the subplots and the themes Orlando intertwined with them. During those moments and my reflections on this issue, I felt like a kid who could battle his inner and outer demons because he can look to his heroes and see them persevere. To me, that is the definition of a successful comic book.

Final Thoughts: Even for the craziest of plots, I love how I feel like an inspired kid after reading this due to the subplots. Even today, I feel encouraged and strong. On that alone, this issue is a success.