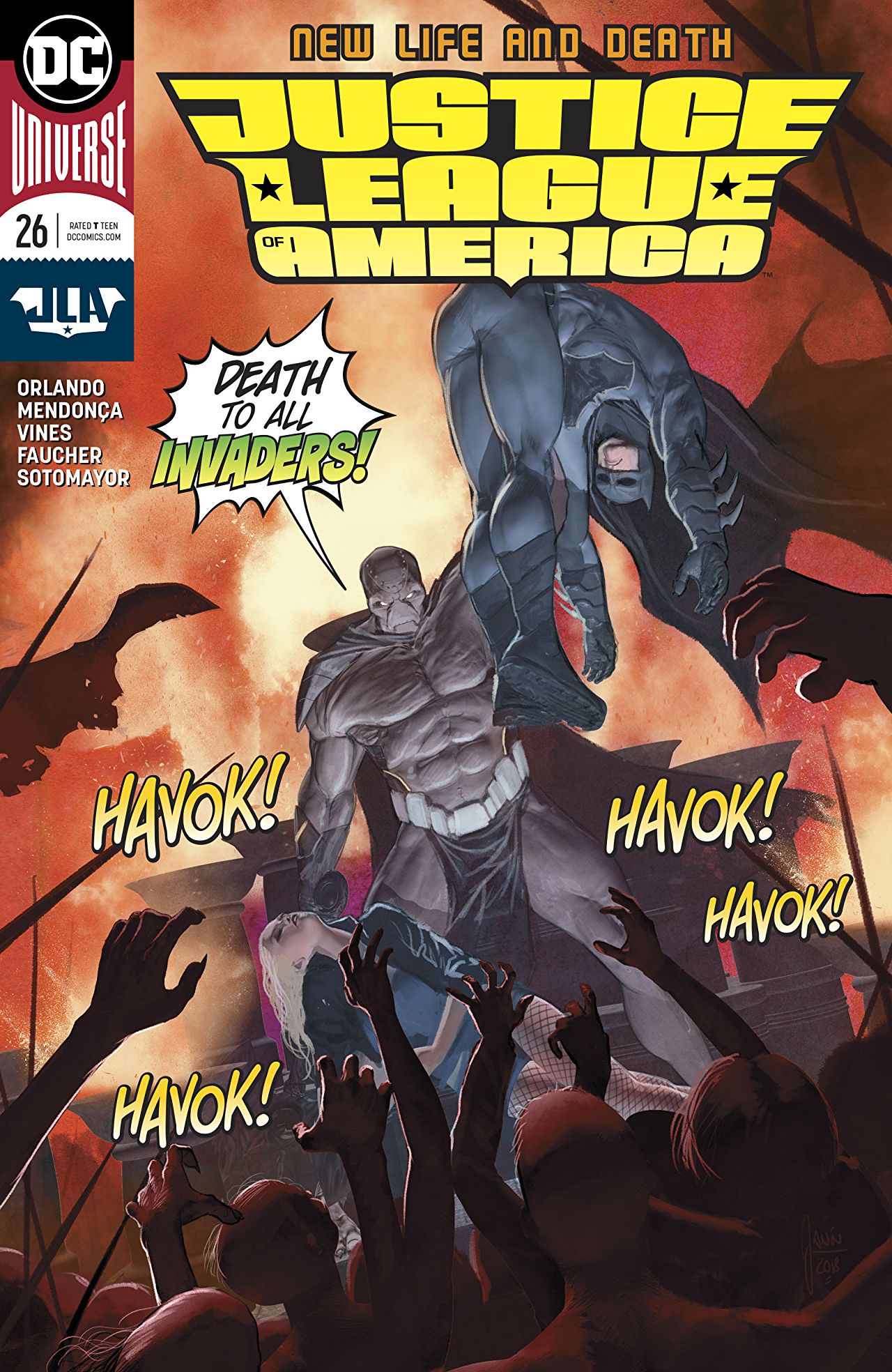 Overview: Dreamslayer and Havok save Angor, and the Main Man flies off into the night.

Synopsis (spoilers ahead): We begin with Lord Havok attacking Dinah, Bruce, and Dreamslayer. As they battle, Havok taunts Dreamslayer with the fact that he cannot escape Havok’s reach. Dreamslayer vows that he is done being his pawn and that Havok is delusional if he thinks that he is Angor’s savior; he is Angor’s curse.

Dinah and Bruce discuss how the battle is not encouraging the Adjudicator to spare Angor from his judgment.

Dreamslayer, between punches, tells Havok how his regime brought Angor’s ruin. The citizens loved and trusted him at the start his reign, then as Havok became crueler, they turned against him. Terror and discord became the norm. He taunts with the fact that Havok has become the same man as his tyrannical father.

Bruce pulls out his earthquake gloves, and Dinah asks if he always carries them around. (Of course, Batman is always prepared.) Bruce mentions that he can only hit Havok so many times before the recoil of the gloves permanently “liquefies his spine.”

Dinah makes a point that Dreamslayer and Havok are fighting for the same thing, to restore Angor. Because of the trauma and manipulation that Havok did to Dreamslayer, Dreamslayer is being consumed with revenge rather than staying on mission.

Bruce steps in and pummels Havok. As Havok regains himself to take out Bruce, their fists hit straight on. With the force of each of their hands combining to create a massive shockwave, Havok’s hand becomes badly deformed, while Bruce’s glove and right arm of his costume are obliterated.

Standing resolutely with one bare arm, Bruce confronts the Adjudicator and sacrifices himself to recreate Angor. The recreation of the world requires the sacrifice of one. Havok stubbornly calls Bruce to stand down; if a sacrifice is needed to restore Angor, then it will be one of their own and not of an outsider. Dreamslayer joins Havok, for it was Dreamslayer’s mission from the start to recreate Angor. As Dinah and Bruce watch their sacrifice, the Adjudicator recreates Angor in its entirety.

The Adjudicator notes that in all of his existence, he has never stayed his judgment of a world. He comments that Bruce and Dinah’s lives are fleeting in the scope of time, yet their actions tip the scale towards hope.

Dinah and Bruce are transported back to Happy Harbor where Caitlyn and Mari are rebuilding their base. Lobo leaves Happy Harbor as the Atom sends him off.

The last page shows the Micron being attacked by Chronos twenty years in the future in Ivy Town. Chronos mentions that with his attack on the Micron, he now has Ray Palmer’s attention.

Analysis: The art of this issue is spectacular. Once again, the art of the JLA series has been top notch. One page that stood out is the one where Dreamslayer is punching Havok and in between those punches he explains how Havok ruined Angor. This page is unique since the scenes that Dreamslayer is recounting are faded in with the current situation that Dreamslayer is unleashing his wrath upon Havok. This creative team has done wonderful work during this arc and this book.

Steve Orlando wrote a terrific arc. I love how Dinah and Bruce are not the focus of this issue, but Dreamslayer and Havok are. We see two people who have the same goal but represent two different sides of humanity. We have Dreamslayer who wants an Angor where each citizen is free, and where they have every opportunity for success. Havok wants an Angor that is strong; when adversity comes, he wants Angor to have the strength to overcome. Each man wants the same thing, but their approaches are different.

Aristotle talks about the Golden Mean, where it is desirable to live in the middle of two extremes. For any society (especially in Angor), there needs to be a balance between freedom and security. Before Angor was living in a state of extremes, and because of that, it was judged by the Adjudicator to perish. Because of this lack of balance, he did not permit is recreation. With Dreamslayer and Havok sacrificing themselves for Angor, we see that this equilibrium has been restored.

I did find it funny how Bruce tricked Havok by setting himself up to be the sacrificial lamb to the Adjudicator. He knew that Havok’s arrogance would cause him to step into Bruce’s place. I do find it weird that he manipulated a guy to his death. (Well, a sacrifice for Angor, but still.)

Overall, I like how this issue ties up loose ends. I do want to know more about the Adjudicator and how he relates to the DC cosmos. As a being who exists outside the DC multiverse, maybe he knows Dr. Manhattan?

Oh, I almost forgot; Lobo leaves. We will be missing the Main Man.

Final Thoughts: Great end to an interesting arc. Sad to see Lobo go, but excited for the future of this series.