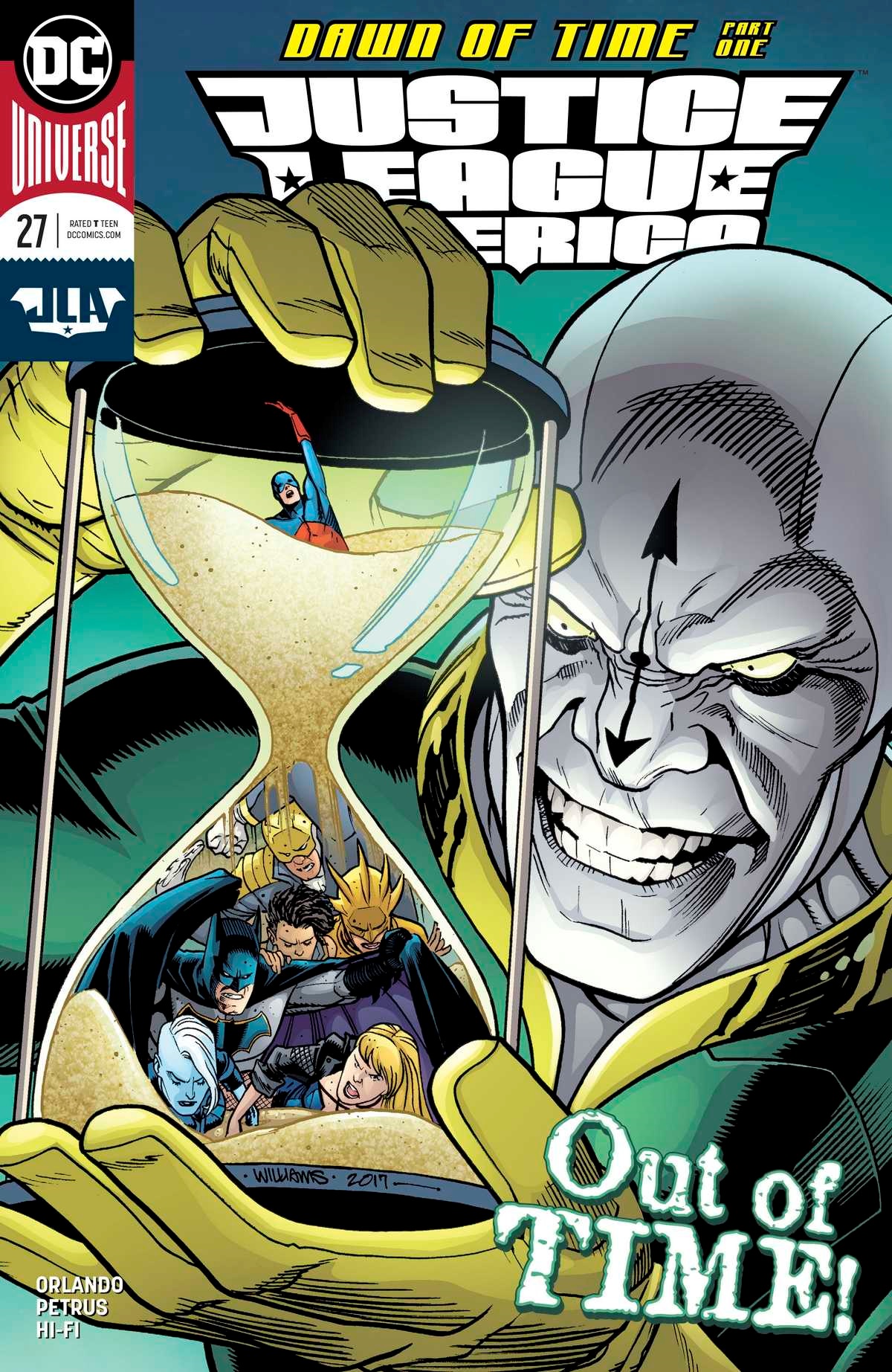 Overview: Under Mount Justice, the team tries to protect a hidden pocket of energy away from the machinations of Chronos.

Synopsis (spoilers ahead): In the Microverse, Ray Palmer fights Chronos, his longtime nemesis. As Chronos prepares to kill him, Chronos is disabled by Palmer’s bodyguard, who is a telepath. In this moment of weakness, Palmer and his allies go on the offensive. After sustaining their attacks, Chronos stumbles upon the key to stopping Palmer and the entire League. He teleports from Palmer’s grasp, stating that he is going to steal something–or someone.

In Happy Harbor, Bruce, Mari, and Caitlyn discuss the progress of rebuilding the JLA base. In the middle of their discussion, a construction worker radios Mari if she, and her team, could come down and check something deep below the base.

Below the base is a portal of 4-D energy that has the imprint of a hand. Mari asks Bruce that among the many owners of Mount Justice, how has no one found this portal? At that moment, Ryan gets an alert that mortifies him, noting that he detects the presence of chrono-reactive energy, being the energy of Chronos. He alerts the team that Chronos is a master thief, a thief of time.

Chronos appears with the techno-chiefs (cronies that used to serve Darkseid) and tells them to attack the league. The Ray, as usual, hot-headedly attacks Chronos. This unwise decision leads to The Ray being frozen in time, feeling that he is flying forever. As Chronos systematically takes down the League, he confronts Ryan. Mockingly, he berates Ryan telling him that he is not a worthy successor to Palmer.

With Ryan stalling, Chronos lays out his master plan (like every good villain does). He shares that he came to steal the hand imprint in the portal. He states that the imprint is where the idea of the “superhero” reached earth. He could not actively travel there himself because this “idea” reached earth so long ago that the timeline is too fluid to accurately get to that moment. Thus, he had to come to the exact time that the JLA uncovered it under Mount Justice. He explains that the handprint is where Ahl, the god of superheroes, first came to earth.

Chronos gloats that this poor substitute for Palmer cannot beat him. Ryan admits that he has been stalling. At that moment, Nayeli (Aztek) punches him square in the face. He is confused why she is not under the effects of time-distorting technology. Nayeli states that her war-suit is powered by a 4-D battery source that is immune to chronal energy. As she continues to attack him, his grip on his devices wanes and the JLA regroups to attack him. Chronos uses one of his explosive devices to give him cover as he runs away.

Chronos reaches the imprint before Ryan can stop him. He tells Ryan that he will be seeing him around and leaves through the portal. Ryan tries to tell the League that this fight is his alone and he must stop Chronos at all costs. Bruce reminds him that this League is a team, and they will fight him alone. After they enter, they realize that have traveled back in time “a few hundred million” years. Ryan points out that they traveled in time not in space, for the imprint should be in front of them still. Chronos, behind the League, tells them that they are too late because he has the “god of superheroes” in chains.

Analysis: After the last two arcs with Tsaritsa and the Adjudicator, I am glad we have a compelling villain with Chronos. Now, I do not know why his feud with Ray Palmer runs red with hatred. (How can a guy who shrinks beat up a guy that manipulates time anyway?) I am glad though that he has more personality than the previous villains.

I like how the main JLA heroes are not at the forefront of this issue; it is the “second rate” Atom, Ryan Choi. I know not much of the character except that he is extremely smart, but I learned a lot more of who he is and what he stands for. The way that Steve Orlando writes his progression is unique. You have the normal inner monologue of a hero, but you do not see Ryan struggling with the right, the wrong, and his demons. Ryan is a scientist first, and you get to see how he processes this threat and his response to it. I also like that he is not a “poor man’s” Ray Palmer. Yes, he is the Atom, but he is not afraid to take on his predecessor’s nemesis.

I do not know who this “god of superheroes” is but we now have yet another god in this book. After Tsaritsa, Promethea, the Adjudicator, and now Ahl, I think this book has gone a little overboard with “gods.” After this arc, I hope Orlando takes this book in a more grounded direction.

Overall, I really like this issue and I believe this is one of Orlando’s strongest issues. I really like the direction and story of this arc. I am incredibly interested in seeing what he has planned next. Like all JLA issues so far, the art is consistently good.

P.S. I hope that Booster Gold makes an appearance. Anytime there is time travel, especially with a time-traveling thief, Booster should make an appearance. Just saying!

Final Thoughts: I like how Orlando is deepening Ryan’s character. This whole “god of superheroes” thing can be very interesting, but executed poorly will be yet another bland story about the JLA facing gods. I wish Orlando the best and I am very excited about this new direction.