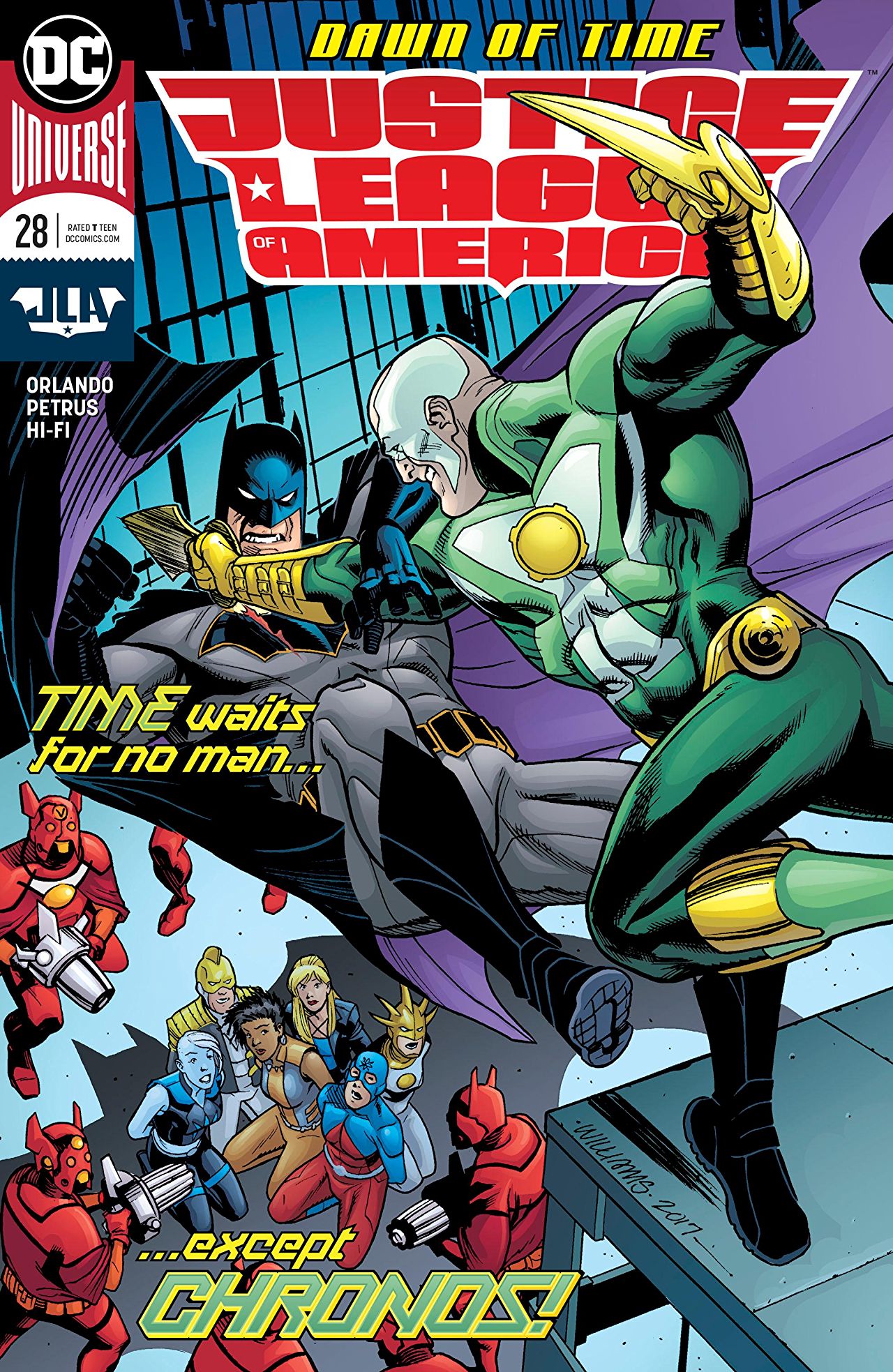 Overview: The JLA fights a smorgasbord of history’s finest warriors as their fight with Chronos escalates.

Synopsis (spoilers ahead): From the last issue, we have Chronos holding a beaten Ahl in front of the League. Bruce tells Chronos that they are not bargaining for Ahl; they will free him. Chronos agrees and states that he is only going to speak with Ryan. Ryan steps up to the plate and walks closer to him. He ridicules Ryan about how unworthy he is to wear the Atom suit. Ryan informs him that he earned the suit, and it was not a handout. While talking to himself, Ryan shares that Ray Palmer and Chronos have fought numerous times in the past. Chronos will plan for weeks to counter whatever battle tactics that Palmer used to defeat him in the past to prepare for future attacks. Ryan admits that the only way to beat him is to do the things that he is least expecting. While Chronos gloats (he surely loves his monologues) about how superior he is to Ryan, Ryan shrinks and attacks Chronos.

With Ryan’s distraction, Batman tells Ray to snatch Ahl away from Chronos and retrieve each member and take them away. Each member raises their hands for Ray to grab, and they are taken far away from the battle. They regroup, knowing that Chronos and his “chronies” (see what I did there?) will bear down on them soon. Ray creates a hard-light castle to protect the team as Chrono’s forces are on their tail.

Ahl comforts Ray, admitting that it is his fault for allowing himself to be captured and put the League at risk. He encourages Ray to hold the construct, even letting him know that he will be by his side helping him.

Elsewhere, Mari and Bruce discuss their next steps. Bruce realizes that one of Chronos’ hourglasses should be able to send the time-displaced army of Chronos back to their respective times.

Chronos finds a person/being in hypertime that is able to get through Ray’s castle-construct, Chemo. The League realizes that things have gotten from bad to worse since Chemo is now apart of the equation; they hastily go on the offensive and attack Chronos. With the League fighting the army, Ryan attacks Chronos – well, he unsuccessfully attempts to do so. Chronos dodges the attack and cuts Ryan’s arm, severing the brachial artery. (A very important artery; you will die within minutes if it is cut and you do not receive immediate medical attention) Ray comes to his defense, but he also is easily taken out by Chronos.

Now, Chronos grabs Ahl by the collar and taunts him that he has found the key to defeating Ahl – the “brick that can think.” As Ray helplessly watches, Chronos smacks Ahl in the temple with this brick, seemingly killing him.

Analysis: This issue is a wild ride. Orlando definitely had fun with the time traveling aspect for Chronos’ army. You have Dinah punching a Roman centurion. There is a Mongolian warrior from Ghengis Khan’s army. Bruce throat-kicks a WWI soldier that has a minigun. And, there are many other warriors that I cannot identify readily. I feel sorry for this art team for all the different eras they had to draw.

The strength of this issue is the amount action sequences and the development of Ryan. This book starts off with an action sequence and ends in one too, with many other action bits along the way. It is a fast-moving story that is a bunch of fun. I have really enjoyed the maturation of Ryan. We see him develop from a side character into a hero in the past few issues. He is fully confident that he is the Atom; many superheroes struggle taking up the mantle of their predecessors (e.g. Dick Grayson as Batman), but he is ready for the challenge.

The weakest part(s) of this issue is any time I see Ahl. His character just does not make sense. I am not saying Orlando is doing an awful job writing him, but this “God of Superheroes” thing does not make any sense. How does one extraterrestrial millions of years in the past affect whether Bruce, Dinah, or the rest of Earth’s heroes become heroes? The premise alone just confuses me. Also, the interactions between Ahl and Ray were weird. It seemed that that relationship was forced. When you read it, it feels incredibly out of place inside an action-heavy story. Finally, the way that Ahl dies is ridiculous: he gets hit by a blue brick in the face and dies. If Lex Luthor wanted to take out Superman with kryptonite, would he make a kryptonite brick and smack him in the face? No, at least not in the modern era of comics. The brick made me chuckle a lot!

The art was fantastic. Seriously, buy this book for the art. So much action, so many moving parts, so many weird characters and figures: I tip my hat to them. The penciling in each panel was crisp and the colors were diverse and beautiful.

Extra Information: Many of you may be wondering who/what “Chemo” is. Chemo is a pre-Flashpoint villain with his most recent appearance being in Geoff John’s “Infinite Crisis.” Chemo is a sentient…bucket of chemicals. In Batman #649 (part of the Infinite Crisis event), Chemo was dropped by The Society onto Blüdhaven, killing millions of people. Basically, this guy is a walking vat of fear for the DC heroes.

Chronos mentions that he plucked Chemo out of hypertime. Here is a quick explanation of what hypertime is and how it works. Hypertime was created by Grant Morrison and Mark Waid in 1999. Hypertime, the overarching and interconnected web of timelines and realities, presumably existed for almost as long as creation itself. Basically, hypertime is the highway to connect to any and all DC timelines and universes. Although it can be used to traverse time, it is able to go places that exist outside the current universe (thus exceeding the universe’s timeline). The Batman from Tomorrow (Tynion’s “A Lonely Place of Living”) used hypertime to traverse from a possible future timeline to the present day. Because of hypertime, Chronos is not subjected to the constraints of the post-Flashpoint New 52 universe; this is why he is able to grab a pre-Flashpoint villain.

In the current Detective run (Tynion’s “Batman Eternal”) and this issue, we have references to the OMAC project and Chronos: two pre-Flashpoint characters. As a reader, I find it interesting how the Rebirth initiative is intertwining the old with the new.

Final Thoughts: I really enjoy this story until Ahl is in a panel; otherwise, it is an extremely fun and action-packed story.