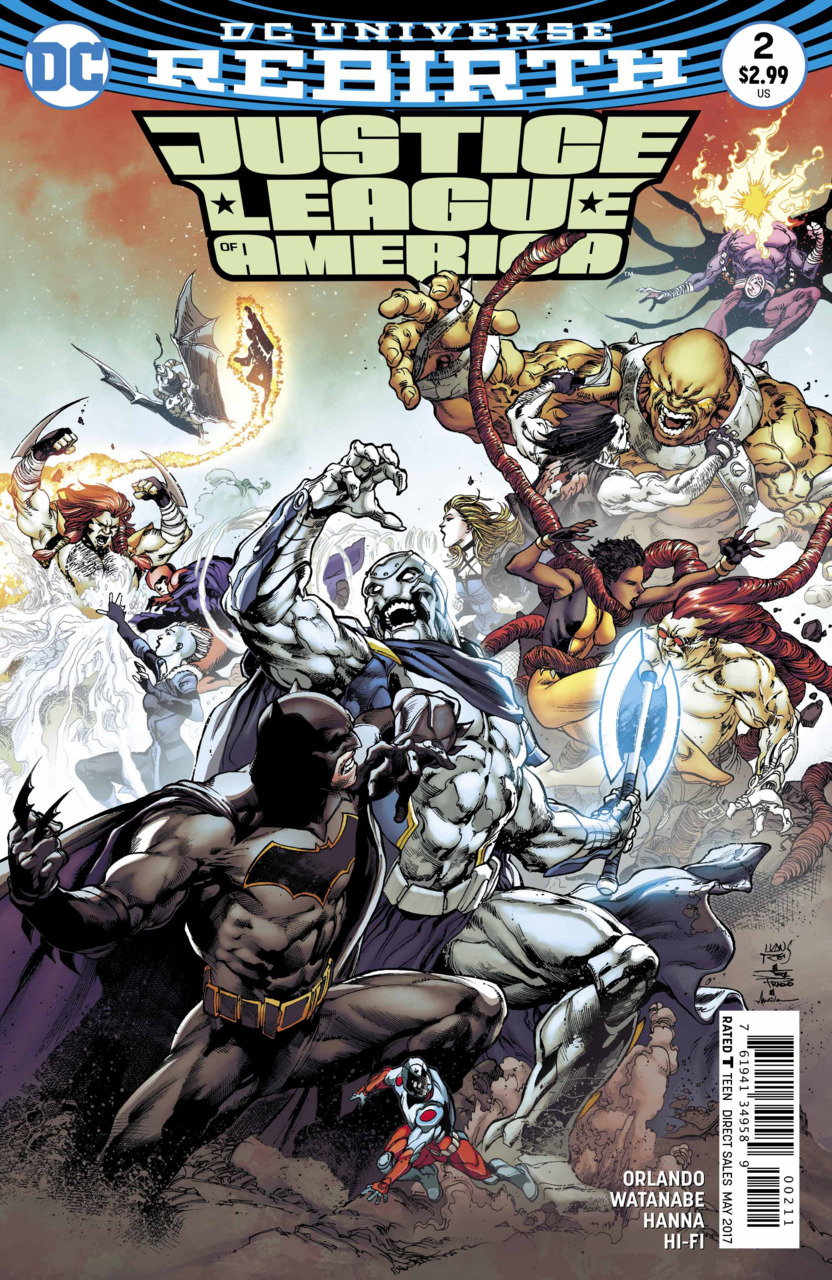 The story picks up from last issue with Lord Havok’s hand at the Atom’s throat while the rest of the JLA looks on.  Batman offers himself up to Havok in exchange for the rest of the team’s lives.  Lord Havok decides to spare the team which leads him into conflict with one of the Extremists, Dr. Diehard, who appears to have magnetic powers.  The conflict is short lived with Lord Havok killing Diehard on the spot.  The Extremists flee the scene for the country of Kravia which they proceed to take over.  It’s revealed that Lord Havok isn’t an alien but is in fact Kraviam royalty back to regain the thrown.  The JLA arrive in the country to help refugees escape and find that the country’s military is following the Extremists and the issue ends with the JLA planning to take Kravia back from the Extremists.

This issue covers a lot of ground, starting with wrapping the JLA’s first big battle with Lord Havok and the Extremists, dealing with the aftermath, and moving the story along from there.  Orlando does a great job of keeping the story moving without feeling rushed.  I especially appreciate the quick and efficient treatment of Lord Havok’s backstory.  It’s a trap that a lot of books fall into that I’m happy to see Orlando sidestep.  Rather then waste an entire issue giving a prolonged backstory no one cares about (cough,Justice League # 11, cough) Orlando quickly gives you the information you need about who this guy is and why he’d want to take over Kravia and moves on with the story.  I’m sure Havok’s backstory will continue to be fleshed out and I hope that they continue to fit it in organically as they’ve done it here.

Speaking of sidesteps, in a story featuring the very timely topics of refugees fleeing civil war, the story does an admiral job of taking an issue that is very much in the public consciousness, using it to move the story forward, but never stopping to wink at the audience or get mired trying to push a political message. There’s nothing wrong with a writer putting his own point of view into a story as long as it doesn’t grind the story to a halt and it’s well handled here.

Also well handled is the fallout from the JLA’s defeat by the Extremists.  It’s a strange sight to have Batman capitulate to a group of bad guys but they make it clear that Batman is only stalling them to save his team.  What I really like about how this plays out is the decision to have Black Canary call Batman to task for seemingly being ready to surrender.  This isn’t the first time we’ve seen Batman in charge of a group of heroes and usually they have Batman playing it mysterious and doing something everyone else doesn’t understand and just saying “trust me” and that’s the end of the argument.  What really works about that here is Black Canary telling Batman that saying “trust me” isn’t good enough.  It’s refreshing to have a book where Batman has to learn and grow as the leader of the team and Black Canary is the right character to be the one to point out that she has a problem with how Batman handled things.

Wantanabe does a decent job with the art although I find myself missing the more detailed and dynamic work of Ivan Reis from last issue.  Wantanabe’s style is slightly more cartoony and less and in a story involving destruction, civil war, and refugees, I find that there’s a weight that’s missing from the art in this issue.  There’s nothing truly bad about the art but I also found the Dr. Diehard sequence to be a bit awkwardly laid out and the lack of detail in some of the backgrounds hurts the impact of some of the panels, particular the crowd scenes in the book.

In summary, despite a dip in the art this issue, JLA continues to be a strong book.  Go buy it.