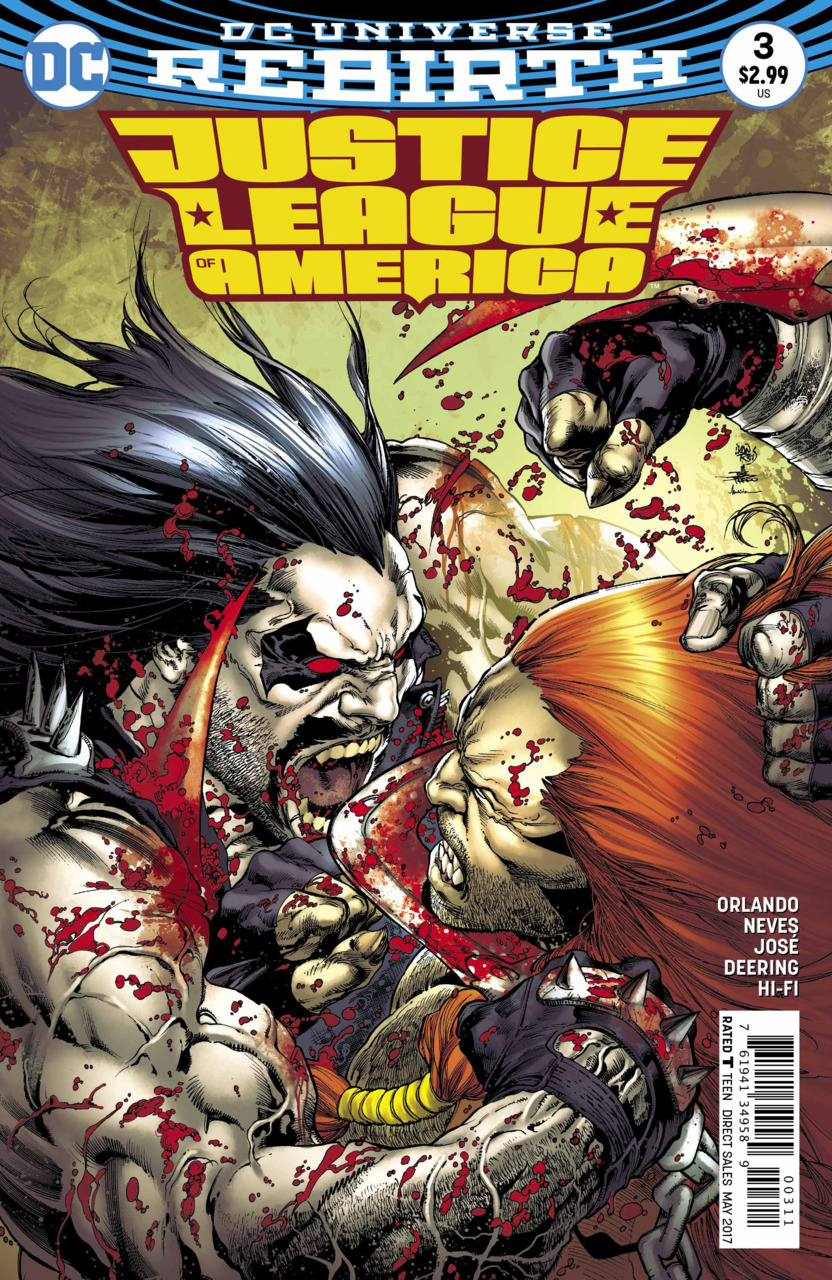 Now that Lord Havok has taken control of Kravia, he is shown reaching out to the leader of a neighboring country offering for them to join him.  Meanwhile the JLA meets with the Kravian Resistance, who ask that the JLA remove all the super beings from their country.  The JLA start taking down the Extremists one by one.  The resistance and the JLA then storm the capital and confront Lord Havok.  Havok is unimpressed by the JLA and explains that he has consolidated his power and now controls all the nations that border Kravia.  As Havok explains that the JLA is surrounded, Batman crashes through the window and throws an explosive batarang at Havok, and grabs the glowing read shield that Havok had been wearing on his back.  The issue ends with Batman holding the shield, explaining that being surrounded makes them dangerous.

This is an action heavy issue with Orlando propelling the JLA forward into an eventual collision course with Lord Havok which is sure to continue into the next issue.  The issue covers a lot of ground and covers that ground efficiently.

If there were any doubt as to why this storyline was picked as the first mission for the JLA this issue makes things pretty clear.  Batman establishes this team as being made up of people who live in the world instead of gods looking down on mankind from Mount Olympus (or the Justice League Watchtower).  Orlando establishes the JLA as more a collaborative peace keeping force with the JLA approaching the Rebels and asking “how can we help” and working with the Rebels as opposed to just showing up and fixing the problem for them.   One of the major challenges of launching the second book in any franchise is coming up with a valid reason for that book to exist.  Orlando has done a good job of highlighting the fact that this isn’t the Justice League and giving this book a unique voice.

The book has to walk a fine line with its mandate that the JLA is there to inspire and work with the people.  There’s a moment when the Ray, the only other member of the league who wears a mask, shows his face to inspire the resistance to trust them.  There’s a quick gloss over of the fact that Batman isn’t about to do the same with the explanation that his cowl is his real face.  While Batman in this book is much more of an inspirational figure in line with Scott Snyder’s take, Batman still tends to play things more mysterious then that and while I think its fine to have that scene once,  I think if they are going to continue to play with these themes in the book, I think that this team has more appropriate characters like Black Canary and Vixen as faces on the team that people can trust and its more fitting to have Batman hang back or work another angle in scenes like this.

Another interesting choice is in the characterization of the Extremists.  It would be easy for Orlando to just make the Extremists your typical group of mustache twirling evil villains.  While they don’t go so far as to make every member of the Extremists redeemable, Orlando takes the time to make Death Bat and Dreamslayer more tragic then straight up evil.  That being said there’s a sequence involving Tracer that shows him to be an unrepentant sadist that makes you feel pretty good about whatever super violent thing Lobo is about to do to him off panel.

The issue ends with Batman holding the same shield he was shown holding in the end tease in JLA Rebirth # 1 which may suggest they may be playing with the JSA character Liberty Belle.  I’m not sure exactly where they are going with this, but the inclusion of the shield is a little too confusingly Captain America for my tastes, so we will see where this goes.

Neves’ pencils are sharp and handle the characters well; particularly the splash pages and Neves does a decent job on the layouts of the action sequences.  I did find the end sequence of Batman attacking Lord Havok to be a bit confusing, but that may be more of a function of the script trying to end on a “trailer moment” then the fault of the artist.

JLA continues to be an engaging team book that’s coming into its own with each issue.  It’s worth your time.