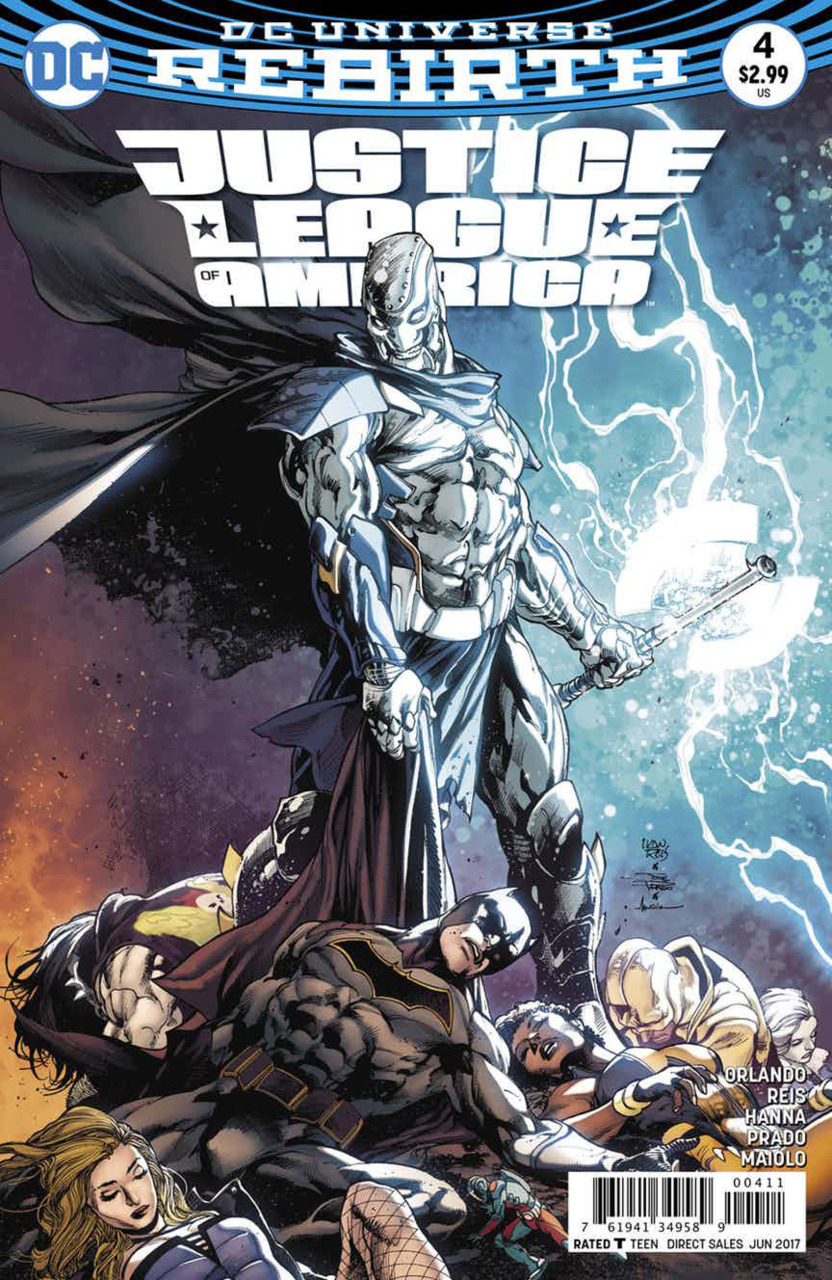 The Justice League of America is scattered over the war-torn county of Kravia facing off against members of the Extremists, a radical group of super beings that have taken over the country. The Ray faces Dreamslayer and the two have a heart to heart about the use of power. Lobo and Tracer gut each other. Black Canary battles Gorgon, Frost and the Atom take on Death Bat while in the main event, Batman and Vixen clashes with Lord Havok. The team takes down the Extremists one by one and arrive to take on Lord Havok who as been kept at bay by Batman, who is holding a glowing red shield he stole from Lord Havok’s back. Lord Havok is brought to his knees by Vixen and Kravia is returned to the people, the Extremists are imprisoned, and the JLA back at the Sanctuary displaying the shield and ax from the Extremist as trophies. Frost and Black Canary have a moment speaking about Canary’s suspicions that Batman has a hidden agenda. The story ends with a flashback to Angor where the Extremists are defeating the Champions of Angor, showing the Crusader, the previous owner of the shield, being killed by Lord Havok while another hero, the Bluejay, escapes by shrinking down to what can be assumed to be the subatomic level and wakes up a strange new world.

The first arc of the series comes to a close with this action heavy issue. Orlando is busy trying to keep a lot of balls in the air which leads to some mixed results. There’s not a lot of time devoted to the final conflict between Lord Havok and the JLA and as a result the end fight seems smaller then it should be. Orlando did a great job in previous issues of giving Lord Havok a sense of menace and that deserved a larger payoff then what’s presented here and the issue would have been better served if Orlando had devoted the bulk of the issue to a final confrontation with Lord Havok instead of jumping around so much. The other confrontations between then Extremists and the JLA didn’t really add anything interesting to the story and it would have been simple for Orlando to wrap up those conflicts in the previous issue with a few more panels and devote more time to a big throw down between our heroes and the big bad of this arc.

On the plus side, I did like how Orlando let Vixen be the one to take down Havok. It’s got to be very tempting when you can play the Batman card at any time and I appreciate the restraint that Orlando shows in using its big gun. Batman is still front and center in the issue, but its nice to seeing another hero be the one to shine. I also found Vixen channeling a poisonous frog to a be an inventive use of her abilities and Orlando does a good job of setting up Lord Havok’s downfall in calling back to Lord Havok telling Vixen that his armor was actually his skin and setting up his downfall.

Then there’s those last few panels of the story. Orlando appears to be channeling his inner Grant Morrison by leaving a few threads dangling with the Champions of Angor’s weapons being displayed in the Sanctuary and the Bluejay floating out there somewhere in oblivion. I’m not sure where Orlando is going by playing in this particular sandbox. I’m not terribly familiar with these characters and I can’t say that using a group of characters that are essentially parodies of Marvel’s Avengers is really holding my interest. It can be fun to play around with character’s like this but I’d prefer that the creative team use characters that require less winking and nodding at the reader.

Ivan Reis makes a welcome return this issue with his distinctive and detailed pencils and he handles the issue well but this issue highlights that Reis is only as good as whoever in inking him. The art suffers by splitting the inking chores between Scott Hanna and Joe Prado. The pages inked by Hanna stick out like a sore thumb and the art looses a lot of it’s detail in Hanna’s hands.

In summary, JLA stumbles with this issue. The issue is still enjoyable, but doesn’t live up to the strong start of the previous issues.