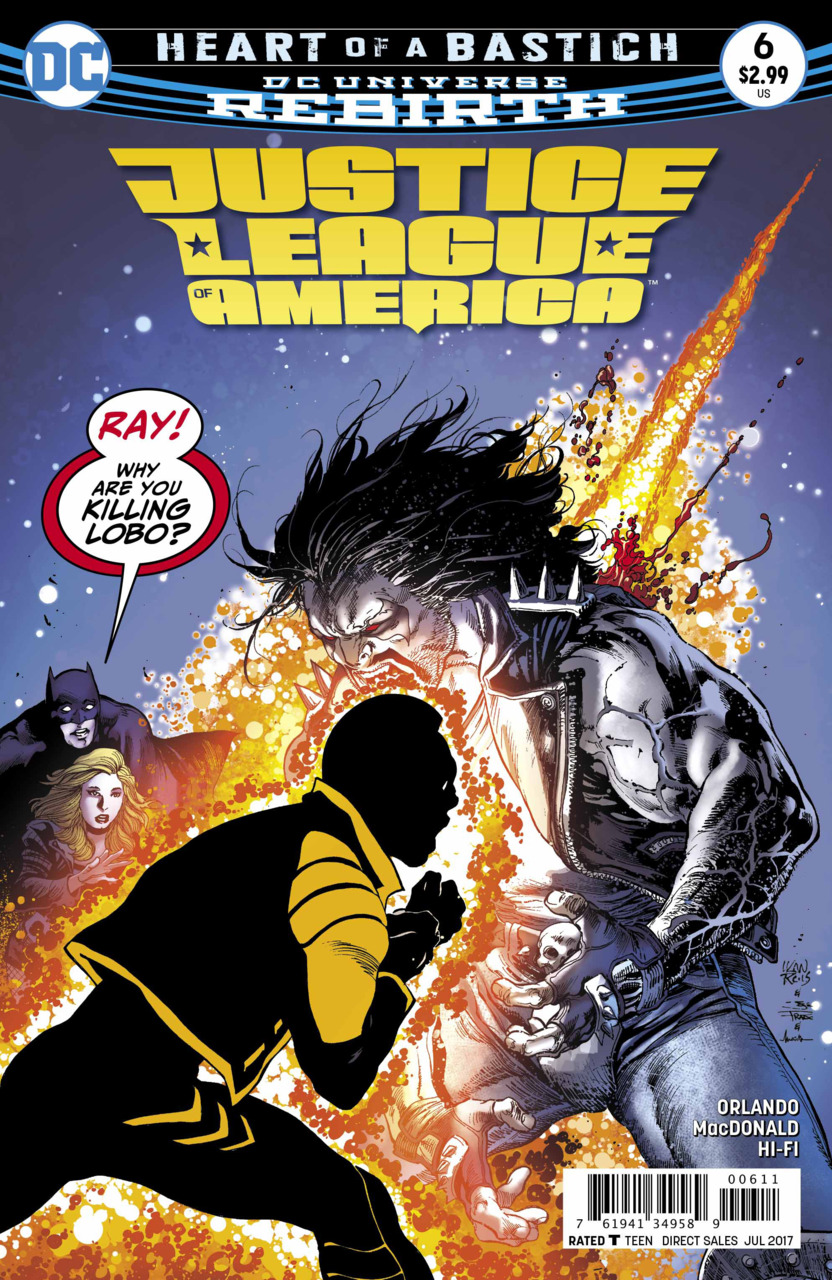 The issue picks up with The Atom confronting Aegeus while the rest of the JLA fights Aegeus’ soldiers in the streets of Penn City. The Ray goes to the aid of Lobo, who has been shot across town by Aegeus’ mystically blessed rocket which has poisoned Lobo’s system and is preventing him from healing. Lobo convinces The Ray to cut out his heart so a new one can grow. The battle continues with Frost killing or at least seriously wounding one of Aegeus’ soldiers while defending a family. Lobo confronts Aegeus and distracts him so he can be taken down by The Atom and his army falls apart and is defeated and the issue ends with a series of conversations between members of the league at the Sanctuary. Lobo and the Atom speak about Lobo’s motivations for being on the team. The Ray speaks with Xenos, a weapons designer that had been forced into working for Aegeus being taken in by the JLA who has been given a job redesigning the JLA Sanctuary. Finally, the story ends with Frost telling Black Canary that she may have found a cure for her heat sickness.

On the positive side, Orlando seems to have a clear sense of what he wants the JLA to be as a super-team by the people and for the people. I still feel its an interesting take on the Justice League and having the League also be involved in rebuilding of the town is a nice touch. I also appreciate that Orlando is trying to make this a more character driven book and Orlando taking the time for a few quiet moments between the characters is a nice way to balance out what is essentially one prolonged action sequence. Frost in particular gets a nice moment during the battle where she reacts in horror to shattering the arm and shoulder of one of Aegeus’ soldiers. She reminds the reader that she feels cursed by her powers which seems to be leading into the next arc where she is looking for a cure.

Despite some well-intentioned ideas, this story arc has been a stumble for the series. Orlando has a lot of interesting ideas but executing continues to be a problem for this series. Take Aegeus for example. There’s nothing on its face wrong with Aegeus as a choice for the villain or his plan to take over an economically depressed town by manufacturing arms, but he’s poorly written and I found the character’s constant monologuing annoying and unrealistic. I can deal with the Ancient Greek-themed armor and the soldier’s riding the multiheaded flying lions but its very hard to take a character serious when every line of dialogue has a character getting on a soap box and giving a flowery speech. It’s a problem that continues to pop up in this series. It’s a easy trap for a writer to fall into. Writer wants to explore a theme in a story arc, and it’s a big temptation for every conversation to be about that theme, but it comes across as on-the-nose and awkward and I think Orlando would do well to calm down and just concentrate on telling a good story.

Speaking of awkward, let’s talk about the art. The story arc’s biggest problem continues to be Andy MacDonald’s art, which is frankly terrible. MacDonald character work is a problem, with many characters appearing weirdly disproportionate and awkwardly position. There seems to be a lack of a basic understanding in human anatomy in MacDonald’s work, which is never more evident then in the scene where The Ray cuts out Lobo’s heart. Now, I’ll grant you, Lobo is an alien, and his internal organs might be positioned a little differently then a human being. That being said, MacDonald draws the scene with The Ray popping out Lobo’s heart like he was pushing out a piece of fruit from a jello desert with no regards for a spine, skeleton, or other organs. Its not a rare thing for artists to cheat realistically anatomy for the sake of storytelling, but in this case, it feels amateurish. The art is simply not up to the standards of a professional comic book artist.

This book is like the first season of Star Trek: The Next Generation. It’s well meaning and it’s got potential, but while its going through its growing pains, it’s kind of painful to watch. Here’s hoping the next story arc is a step in the right direction.