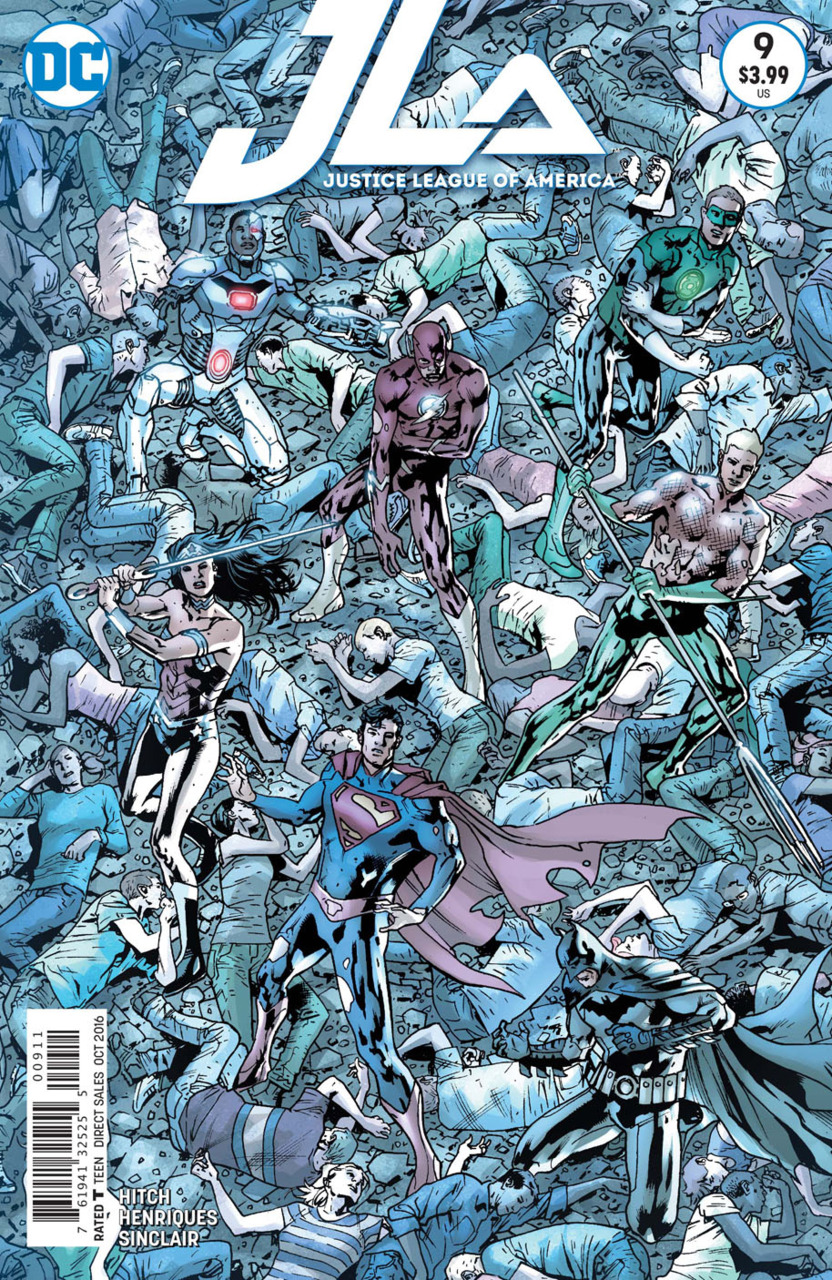 “The Justice League of America Power and Glory Part Eight” opens in the Cathedral of Rao before it came to Earth. On board are Flash and the three members of the Infinity Incorporation. They are in the room with the stones and Flash orders everyone out. None of the people know where they are just and the stones are excitedly singing. There is no way to get through to the stones. We see Rao appear in the room screaming and realizing that he can hear the song of the Stones of Forever singing to his Stones of Life. The others outside stop hearing the song and are soon surrounded by Rao’s prophets and the appearance of Rao himself calling for peace.

In ancient Krypton in the Citadel of Argo, the two Rao’s are discussing the Argo versions tactics. Rao ended war, sickness, and hunger. The first version accuses Argo of being a parasite. But Argo just says that their legacy is one of greatness.

We now see what happened to Green Lantern in this age. Hal is being held in a cell for three days and he is still unable to to use his ring.

Outside the two Rao’s continue their conversation. The older Rao says that he only took the power from the stones as it was offered. The Argo version remembers, but the older Rao accuses him of serving himself not the people. The new Argo Rao surmises that the stones brought him back and now that he is, Krypton will not die.

Back in the Citadel of Rao with Flash, Rao asks to see the stones. Kevin tells Jane to show them the stones. Kevin is hoping for the answers they have been searching for years for and now there are more stones than what he knew about. In the stone room Rao sees the stones. Rao can hear the songs of the stones together, the family is reunited. Rao says that he discovered the stones and thought that they could help him save Krypton. He left and took the stones with him. Flash reveals that he knows the Last Son of Krypton and Rao asks for more information. I surmise that this scene occurs before this Rao appeared on Earth in first issue.

On ancient Krypton we see that two weeks have passed by. The old Rao gives Hal some food. Hal thought that Rao had left but the new Rao does not want to tempt his own existence by changing the older Rao’s. The new Rao has been increasing in power as he is binding every person to him. Hal wonders if Rao can gain control of the stones himself since he is the same man as the newer Rao. The new Rao has been in contact with the stones for 250,000 years and has a deeper symbiosis with them. Rao asks Hal about the his ring which is still not working. It is like there is a wall between him and his ring and he cannot break through. Hal learns that the new Rao is planning something involving Earth. Rao tells Hal that one man can defeat the will of many as drops of water can erode a mountain.

Back in Rao’s Cathedral; Rao, the Flash, and the others emerge from the room. Rao orders his prophets to convert the Flash and the others. We see that Kevin is able to resist Rao’s conversion. Flash steps in and pushes the prophet off of Kevin and the fight is on. Flash quickly takes out the prophets and turns his attention on the Kryptonian Rao who he finds is powerless because there is no yellow sun. Flash and the others assemble in the stone room and Flash tells them that they need to get out of there now and the Citadel heads to Earth.

Back in ancient Krypton, the new Rao rallies his “people” to stand against he one group of individuals that have stood against him. Inside his cell Hal senses that something big is happening. Rao’s focus has shifted and Hal works to regain control of his ring.

Back on Earth, we return to the scene of a dead Superman from issue #8. Diana frantically tries to revive him. The other members of the League including Flash and the Infinity Incorporation look on. Batman even believes that there is no hope. Wonder Woman continues to frantically work on the body of Superman. Cyborg is unable to detect any life in the Man of Steel and Aquaman puts his hand on Diana’s shoulder and tells her that Superman is gone. Wonder Woman gets up and walks towards her comrades when she suddenly screams no and grabs the lighting bolt of Zeus off of her back and blasts Superman’s chest with it. It initially appears to have no affect until Superman wakes up. The League is grateful. Superman wants to find Rao. The power plant they are in starts to shake and everyone gets out. When they get out they see that the ancient planet of Krypton has arrived.

On Krypton, under the power of the yellow sun, all the Kryptonians take to the air. The older Rao tells his younger counterpart that he does not see faith, instead he sees conquest, death, and fear. We see that Green Lantern has escaped powered up and the old Rao puts his faith in him.

I actually have two separate opinions of this issue. This is the first issue of this title that I have reviewed for TBU. With that in mind, I read the prior issues of this title that started after Convergence before I read this one. With that said I did like this issue. It was an issue that brought all the story lines, or timelines together to the point of Superman’s presumed death that we saw in the previous issue. It helped me especially after a second read through to understand when scenes occurred in the timeline of this story and how they all fit together. We conclude with the set up of an epic battle that will be in the next issue. Let us hope that we do not have to wait months before we get the next chapter.

This leads me to my second opinion that I would have had, had I not read the prior issues prior to this one and possibly what some readers of the series may have experienced without a refresher. I believe that it would be difficult to follow what was going on. We have basically the possibility of three and possibly more Rao’s from different time periods and it was hard to recap this issue especially when two of the Rao’s spend a majority of the issue talking. Which one is saying what and why? The art does help with this and for that reason I believe that this medium helps tell this particular story in a unique way that surpasses the writing of a prose summary.

I will give this issue a four batarangs, but I can see a lower rating for this being a stand alone issue. This story would probably come off better in trade which is basically how I have read it up till now. We shall see how my opinion changes after next issue when I will tackle that issue individually.