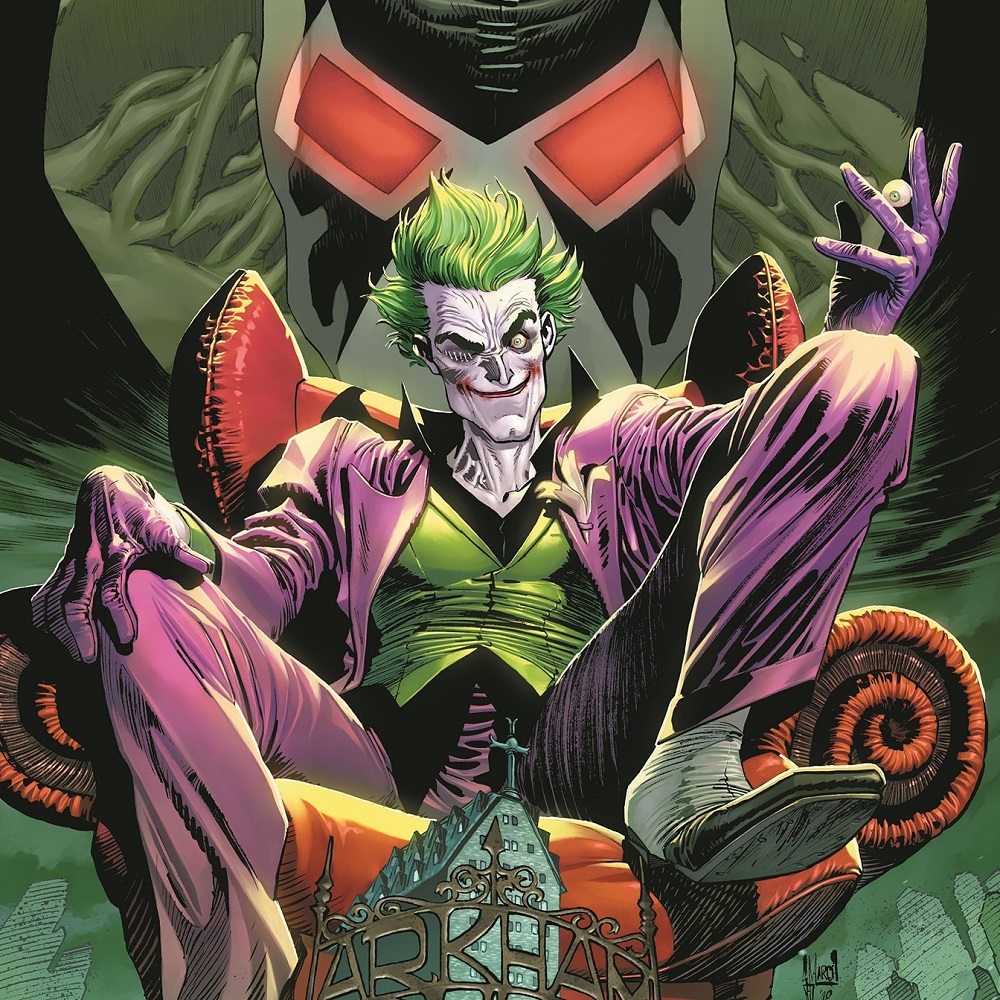 Overview: In The Joker #1, Jim Gordon battles against nightmares of his own personal boogeyman, The Joker, when an opportunity to kill this boogeyman is offered to him on a silver platter.

Synopsis: In a bar in Chicago, a young Jim Gordon reflects on his career over a drink. Another police officer, an older man named Danny Ryan, asks Jim if he’s ever gotten his boogeyman. Jim, confused, asks Danny what he means. Danny clarifies and tells Jim that turning in a few cops on the take is cops and robbers stuff, which is what Jim is doing on the Chicago PD, but there’s evil out there. Real evil. Danny then recalls a case where he found a killer eating the face of a seventeen-year-old girl. Danny never caught the man, but the man haunts his dreams every night.

Before Jim leaves, Danny tells Jim, “But there’s the law, and there’s evil, Jim. And when you see evil, you aim for the head.”

Jim reflects that at the time, he thought Danny Ryan was warning him against turning in other police officers on the take. As an older man, however, Jim realizes that his original assessment was wrong. Every night when he goes to sleep, Jim sees the Joker.

Gordon then details everything that’s happened since Joker attacked and killed hundreds of nurses, patients, and inmates at Arkham Asylum (see Infinite Frontier #0). Harvey Bullock has stepped down as acting commissioner of the GCPD, opting to go into private practice. Mayor Nakano offered Gordon the role of Joker Czar for Gotham, but Gordon turned it down. In Little Santa Prisca, Bane is memorialized, and crowds of young people wear “Free Punchline” gear in the wake of the trial. Jim visits the cemetery, looking on at his son’s grave while he continues to reflect on his own personal boogeyman — the Joker.

As he leaves the cemetery, a woman in a limo asks Jim to join her. Gordon is driven to a mansion, where the woman is going to introduce Jim to a friend of her family. A tall, looming man in an overcoat, a hat, sunglasses, and a scarf masking his mouth guards the rear as they walk through the mansion.

When asked to cut to the chase, the woman, Cressida, tells Jim that the Joker stole a private, off-the-radar, chartered jet from one of her family friends and flew down to Belize. She then asks Jim to hunt Joker down. As compensation, Cressida tells Jim that he’ll have an unlimited spending account and will get $25 million on completion of the job.

When Gordon asks Cressida to clarify the nature of the mission, she tells him that they intend for Jim to kill the Joker once and for all. Gordon refuses, at first, but he has a week to make his final decision.

After he leaves, Jim reflects on when he heard that Danny Ryan committed suicide. It was some years later, back when Gordon was commissioner of the GCPD. Danny couldn’t cope with his boogeyman anymore.

Analysis: Whereas James Tynion’s Batman series focuses on Batman’s hero’s journey to reclaim his city and his status as Gotham’s greatest crime fighter, The Joker descends into the nightmares that plague Gotham when it sleeps.

In The Joker #1, readers are reintroduced to a Jim Gordon who’s lost everything — his role as commissioner, his son, and his footing in the world. He’s a man haunted by tragedy, one who is grappling with a reckoning over whether or not he made the right decisions in life. As his nightmares, his visions of the Joker, manifest all around him, Gordon thinks back to a conversation he had with an old colleague once, long ago, in his early policing years in Chicago. This old colleague told him to shoot evil when he sees it and not to hesitate, or it’ll haunt Gordon forever.

The way this story is constructed is almost like a Raymond Chandler pulp detective story. We’re introduced to a man down on his luck, one nearly at his wit’s end. As if kismet, Jim is picked up and driven to a mansion belonging to a mysterious and wealthy benefactor not too keen on revealing their identity. At this mansion, Jim is offered a fortune to end the nightmares that have been haunting him, to end the Joker’s life. It’s an answer to what has gone awry in Jim’s life, one he’s known for longer than he cares to admit, and Jim grapples with whether or not it’s time to finally accept the grisly answer at face value and pull the trigger.

The Joker #1 is poetic in nearly every way, from the hard-boiled prose of James Tynion to the ghoulish, horror art of Guillem March and the old-fashioned, typewriter-esque lettering of Tom Napolitano. In every aspect, this issue is firing on all cylinders to craft the perfect horror detective story. Beyond the genre, this introductory issue is arguably one of the best books DC Comics has put out in quite a while.

It has a perfect setup and drives home every reason why Gordon, now no longer commissioner, should do what Batman can’t and end the Joker’s life. And since Jim is — well — Jim, he hesitates, just like Officer Danny Ryan hesitated all those years ago back in Chicago. Near the end of the story, Jim remembers when he found out that Danny committed suicide, finally succumbing to the boogeyman, and it’s in this moment that we, the readers know, as Jim knows, that he needs to course-correct, lest he ends his life in a similar fashion.

Later that night, Harper tracks down her brother, Cullen Row, and lets him know that she’s leaving town for a bit. The two argue, with Cullen upset that Harper treats him like a baby. After their argument, Harper heads to her bike, checks for her Bluebird mask, and then examines the dossier on Punchline.

Analysis:  Whereas the main story in The Joker tried to set up the series in a way that felt like a complete narrative that came full circle, this Punchline backup comes across as more bare bones. We’re given the pieces. The board is set up for us, but there’s no story here. Punchline is having problems in prison with the Queen of Spades, and on the outside, Bluebird is tasked to help the D.A. solidify Punchline’s sentencing. That’s about it.

It’s functional, but there are no layers to it.

The Joker #1 has, arguably, one of the most poetic and thoughtful introductory issues of any of the relaunched series in Infinite Frontier. It bears with it depth, meaning, and a sense of importance, which makes it way better than it ever needed to be.