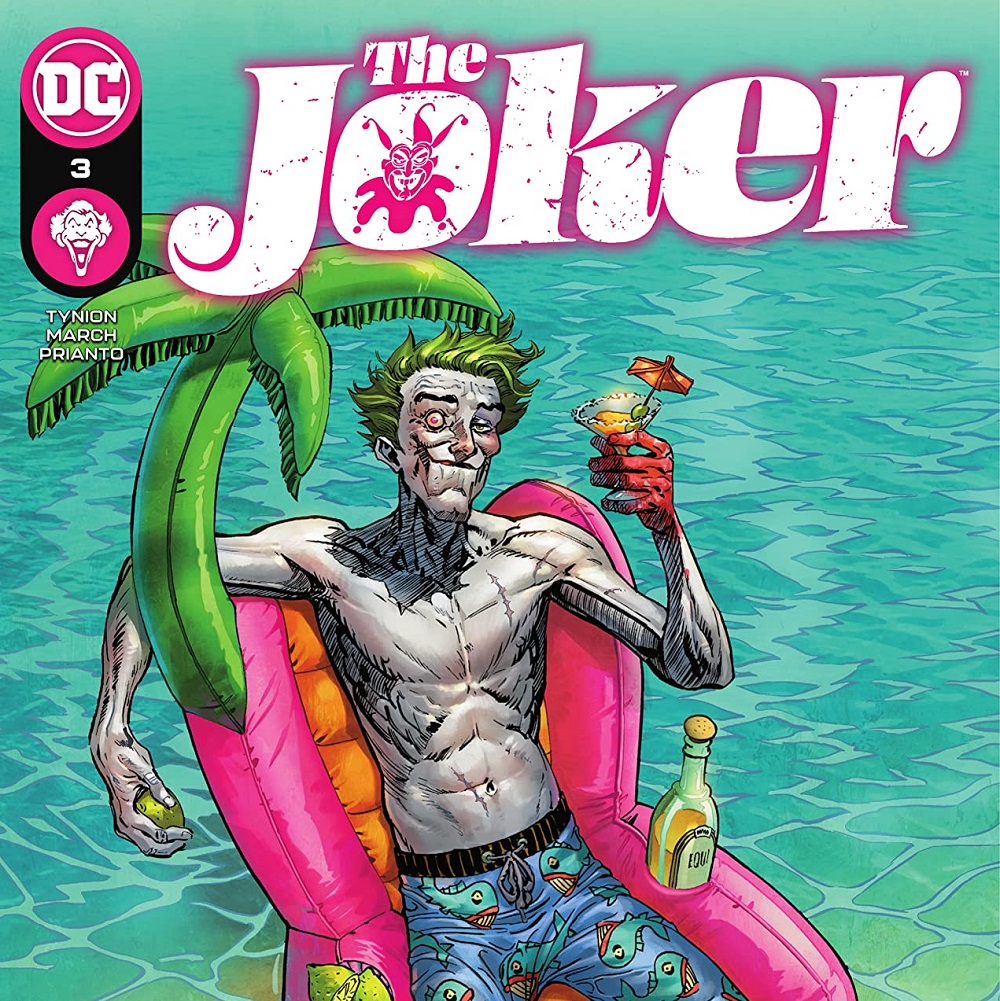 Overview: In The Joker #3, Jim Gordon heads to Belize and follows up on leads in his search to find, and kill, the Joker.

Synopsis: The Joker #3 opens with Jim Gordon having a nightmare. In his nightmare, he’s reliving the events of The Killing Joke. Gordon is forced to walk naked through Joker’s amusement park. Jim recounts the fear and terror of the moment, mentioning that up until that day, he never took Joker as seriously as he did the other criminals in Gotham. Gordon laments how he was initially frustrated with Batman’s focus on the “gimmicky” villains over the real, more organized criminals. Jim’s angry at himself for originally viewing Joker as just a clown who wanted attention.

Jim talks about how he pulled himself together, fighting back against what Joker planned for him at the amusement part. But Jim’s still scarred. He’s still forced to relive these horrifying moments every night.

At a private airfield, Jim gets his expense account card from Cressida and enters the plane. She tells Jim to treat himself while he’s on the hunt, as the backers and herself want him to be comfortable. Onboard the plane, Jim texts Barbara to let her know that he’s on his way. Cressida’s silent henchman is accompanying the flight.

Meanwhile, Barbara Gordon coordinates with Batgirl (Stephanie Brown) from the Clocktower. Batgirl (Cassandra Cain) is out in the field, planting a tracker on Cressida’s car.

On the private flight, Jim opens his casefile on Joker and starts putting pieces of the puzzle together. On another airplane, two people from another party hunting down the Joker hold the flight hostage. On a seafaring vessel, Bane’s daughter leads a small, Santa Priscan army in pursuit of the Joker.

In Belize, Jim lands and starts working on his case. He outlines his process, following his gut feeling. His gut tells him that if Joker is at a resort where other people are, the Clown Prince of Crime isn’t hiding or in hibernation. He’s still putting on a show, which means people will go missing. Jim starts with the service workers, drinking with them and befriending them, so he can question them for information. He picks up a lead and drives to a destination. At the destination, he knocks on the door only to find the Joker right away.

Jim draws his gun and aims it at Joker, but there are guards behind Mr. J who aim their weapons at Jim. This moment has surprised Jim, as his detective experience figured he wouldn’t find Joker so soon. He hasn’t had a moment to digest what he’d do in this situation. Gordon then lowers his gun.

Joker tells Jim that he’s happy to see his “old friend.” The Clown Prince of Crime then informs his old “partner” that it wasn’t he who gassed Arkham Asylum. Joker’s been set up, and whoever is behind the Arkham attack (seen in Infinite Frontier #0), they’re coming for Joker right now.

Joker tells Jim to keep his gun drawn and at the ready. This situation is about to turn into a shooting gallery as both parties hunting Joker, including Bane’s daughter, near the scene.

Analysis: The Joker #3 starts with a haunting recollection of what Jim Gordon went through in The Killing Joke. While it’s quick on the details, it’s a fantastic method for immediately drawing readers back into Jim Gordon’s hunt for Joker. Throughout the nightmare, Jim revisits key moments from The Killing Joke while telling the readers about what was going on in his mind and how his perception of Joker changed after that day. We see Gordon as a scarred man, one teetering on the edge of being broken. He’s revisited by this grisly scene nightly, but he’s holding onto his sanity, and in doing so, we see just how strong Gordon truly is. Mentally, he’s arguably as strong as Batman, if not more so.

This is a fantastic way to further embed readers into the mind of Jim, as well as develop his character for newer readers. It also puts Gordon on a level of strength and determination more equal with the Joker, convincing us that — yes — Jim can take the Joker. It also serves as a way to make readers emphasize with Jim’s plight, and make us see why, perhaps, the Joker should die at the end of this series.

From there, writer James Tynion IV shows us Jim working the case. It’s informative and believable, flashing before us in brief panels penciled by Guillem March. It’s hard to decipher how much time has passed, but it seems to be only a few days because even Gordon is surprised when he stumbles upon the Joker so quickly.

And it’s quite a surprise! This is arguably the best scene in The Joker #3. March provides a full-page panel of a gleeful, surprised Joker coming out to greet Gordon as if he were an old friend. One hand is extended as if to shake Jim’s, while the other rests upon Joker’s heart. In the bottom right of the panel, there’s another, smaller panel of Jim’s reaction. He’s taken aback, mortified, and bewildered all in one. In a split-second, Gordon immediately draws his gun in the next panel, and the moments that follow are brilliant.

There’s no way Jim can kill Joker without being gunned down himself, so Jim withdraws his weapon. Joker pulls Jim into his world as if Jim were expected, as if this was the plan the whole time, This ending echoes the beginning of the issue. In Jim’s nightmare, there’s a moment where Jim discusses how it seems like the Joker can predict a person’s next words or actions before that person gets a chance to say it. Joker has a way of making people feel transparent and small, and after this reunion, Jim’s narration, which has guided readers throughout the past three issues, suddenly disappears. Jim is transparent and small again, once again succumbing to Joker’s amusement park ride. Naked and afraid.

Synopsis: As the backup story in The Joker #3 begins at Snyder College, Bluebird (Harper Row) is at Aiden’s secret hiding spot for all of Punchline’s (Alexis Kaye) Joker paraphernalia. He expresses concern for his own safety, as he helped produce Punchline’s podcast. Aiden admits to researching serial killers with her and putting together a hit list of people at college before Joker came along (see Punchline’s origin in The Joker 80th Anniversary 100-Page Super Spectacular #1). To keep himself from getting indicted, as well as to help Punchline, Aiden plans to burn it all.

At Blackgate Penitentiary, Orca tracks down Alexis Kaye. The two fight, and while Alexis puts up a good fight, Orca gains the upper hand and takes Alexis’ unconscious body.

Back at Snyder College, Aiden hits Bluebird with a paralytic gas, which will put her in a state of paralysis for twenty minutes. He admits to having a lower kill count, taking pride, however, in being the first of the two of them to kill an actual superhero. Aiden then torches the secret Punchline stash with Bluebird in it.

Analysis:  If you’ve been keeping up with this Punchline backup story over the last few issues of The Joker, this chapter is where the backup finally begins to pay off. We’re gaining momentum in Harper Row’s investigation into Alexis Kaye, and the battle between the Royal Flush Gang and Punchline in prison is definitely heating up.

There’s tension now! If Harper is unable to save some evidence from Snyder College, Alexis might actually find a way to get herself off the hook for Joker War. The assault from Orca could also prove the tipping point in getting this “poor victim of the Joker,” as Alexis paints herself, free from prison. It’s an exciting turn to what was otherwise a tedious backup in previous issues. Based on this chapter in The Joker #3, it seems this backup shouldn’t be underestimated going forward.

Just when Jim Gordon, and ourselves, think we know where The Joker #3 is taking us, the creative team pulls the rug out from under us! This issue continues with the excellent noir-style detective narrative and rewards readers by keeping them on their toes. The Punchline backup story proves exciting, too.