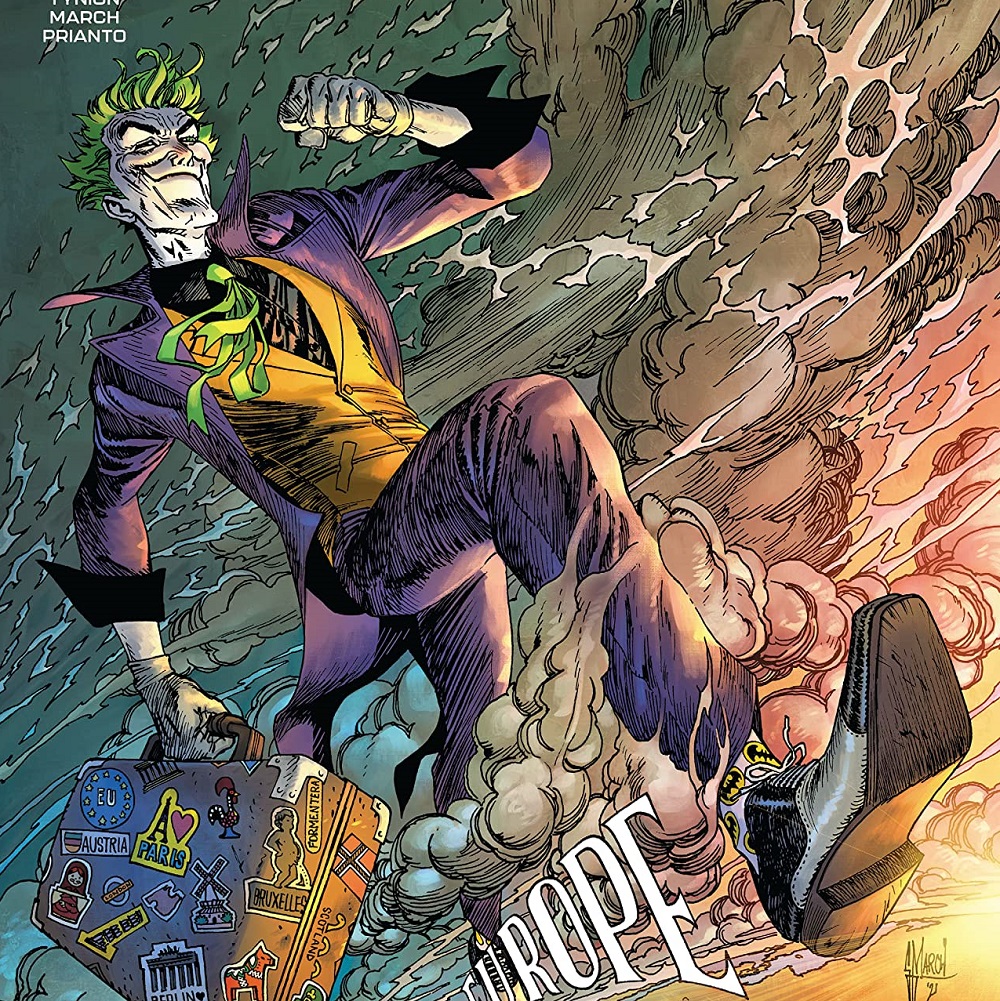 Overview: In The Joker #6, Jim Gordon tracks Joker to Paris, France, a city he always meant to visit with his ex-wife, though there never was time.

Synopsis: The Joker #6 begins fifty years ago in Hooper County, Texas, with a much younger Sawyer Sampson and his idiot brother, Billy, chasing a woman who flees their home. Try as they might to kill her (so they can have her for supper), they fail, and she escapes their property. Sawyer and Billy chase the woman into the forest, where they come upon a pool of oil. As fate would have it, this oil is what gave the Sampson clan their wealth, as well as the ability to buy off the “massacre victim” who escaped them.

In the present, Sawyer Sampson communicates with his niece, Vicky, who has a doctor patching up her brother. Vicky gloats that the doctor thinks that by helping them, the doctor’s family will be released. The Sampsons discuss alternative plans on how to dispose of this doctor and his loved ones.

In Paris, France, Jim Gordon finds himself patrolling the streets in search of clues. He recalls how his ex-wife, Barbara, and himself would pretend like they were having a date in Paris. They dreamed of planning a trip together, and when they finally put the plan in motion, Jim had to delay it in order to solve a case in Chicago. They had children next, and the trip was never rescheduled.

Jim tracks down members of Le Bossu’s crime family in Paris, a small organization belonging to the Club of Villains. He turns up no leads and heads back to his swanky hotel. Jim is finally taking advantage of his ability to travel comfortably, but it makes him feel out of place.

Jim contacts Oracle, and he tells her that he’s turning up dead end after dead end. Barbara tells her father that she’s locked out of a lot of the networks she used to have access to, ever since going public with Oracle’s return. Barbara does provide what she knows, telling her father that Santa Prisca is being run by former military leaders who worked for Bane. She mentions that she’s told Batman to dispatch somewhere to Santa Prisca to find out what’s going on, as they have no intelligence on who this new “Bane” is.

Meanwhile, the Sampsons have killed the doctor, and Buddy Sampson, a nephew of Sawyer, dons a helmet once belonging to Billy.

Jim and Oracle discuss how there is something much larger, and much more hidden, at play, pulling these strings. According to Oracle, Cressida has been living the most boring life ever, so she needs her father to call in a favor. Jim agrees to ask for the private jet from Cressida, so Oracle can see what Cressida does. Before they end their call, Barbara uses a code phrase that translates to her thinking that the two of them are being watched.

From a payphone, Jim calls Harvey Bullock. The two catch up, and Jim offers Harvey a job working for him on this case. Jim is going to need someone to do some legwork in Gotham. Harvey agrees.

Before Jim ends his call, he’s surrounded by police officers. They belong to the French Legion, and a woman from Interpol is with them. Apparently, Jim’s fingerprints were on a murder scene in Montmartre, and Jim presumes it was the work of the Joker. Jim agrees to go into custody with Interpol.

Analysis: After the break from the action in the last issue, The Joker #6 jumps right back into Gordon working his case and reflecting on his career. While in Paris, we see Jim mulling over his failed relationship with his ex-wife. He comes to the realization that he’s never been able to separate himself from his police work, that he’s always placed solving his cases and making sure justice is served over everything else. It’s what pushed his wife away. It’s what ultimately led to her taking his son back to Chicago. It’s also implied that maybe this is why Jim lost both his wife and his son.

After the battle in Belize, we get a breather with The Joker #6 as writer James Tynion and series artist Guillem March reorganize the pieces on the board for Act Two. Jim calls in Harvey Bullock for help, and Oracle lays down the foundation for an even greater conspiracy at play, something that could possibly run deeper than the Court of Owls (teased in The Joker #2). As she suggests, it might be something invisible that they haven’t seen before.

We also learn more about the Sampson Family. We’ve known since the first issue that Billy Sampson was a cannibal, and somehow, his actions led to a fortune for everyone else. In this issue, we finally learn what that fortune is – oil! With this reveal, the Sampson family’s origins feel a little uninspired. The opening of this issue plays out similarly to the ending of The Texas Chainsaw Massacre. In this case, Billy Sampson is a stand-in for Leatherface in both mental capacity and brute strength, similarly chasing down the film’s lone survivor. This would be kind of a cute nod if writer James Tynion hadn’t just made another horror franchise reference in the pages of Batman #111 last week (spoiler: it was a Hellraiser reference in the Ghost-Maker backup). Instead, it makes Billy Sampson seem more like a lazy stand-in for Leatherface rather than a wholly unique character in the Batman Universe. Tynion is obviously trying to be fun, as it takes place in “Hooper County, Texas” (The Texas Chainsaw Massacre was directed by horror legend Tobe Hooper), but with it coming on the heels of last week’s reference to another property, it’s more exhausting than fun.

Guillem March returns on art this issue, and with his return, that unique, macabre vibe is back. March’s art brings out a Labyrinthine quality to Paris, making it seem like an unending maze full of literal dead-ends at night. Paris by day is crooked and off-kilter, adding to the sense that Jim Gordon doesn’t belong here, that this might be a misstep out of place. March’s art works wonder with Tynion’s narration, as the art continues to make the noir elements of this Jim Gordon narrative stand out. There’s a griminess to everything and a weariness to all the faces. This vision of Gotham and the world beyond is heavy and aged. It’s seen some things. It’s world-weary. And it’s absolutely beautiful, in its own spectacularly dirty way.

Synopsis: The backup in The Joker #6 sees Harper Row assume the identity of one “Katherine Skinner” and gets sentenced to Blackgate in her quest to find Kelly Ness – the only person who can keep Alexis Kaye, Punchline, behind bars.

Though Harper has altered her appearance and added some tattoos to avoid suspicion, Punchline sees through her guise immediately. Harper asks Punchline where Kelly is, but Punchline doesn’t know, nor does she care. As long as Kelly stays hidden, her information cannot harm Punchline. Alexis then goes on to provoke Harper, who tackles her to the floor.

Harper runs off after the attack. Punchline’s fellow inmates, who now recognize her as queen, let Punchline know that they filmed the attack with a phone.

In Park Row, Cullen is hanging out with his friend, who clues him into a video that’s been posted online. It’s a video of Harper’s attack on Punchline, and it’s being used to make Punchline appear innocent.

Analysis:  Harper’s quest to find evidence in order to keep Punchline locked away hits another dead end when Harper is immediately recognized in prison, as well as provoked into an attack that is used to help Punchline’s defense. This backup story in The Joker #6 certainly is a bright and colorful follow-up to Joker’s grit and decay – a stark contrast that almost comes across as alien and separate from the main story.

If you’ve been enjoying this story so far, this issue’s backup continues to trot along at a consistent pace. Harper’s next plan of action, like so many plans before, has another wrench thrown into it, and she’ll have to improvise where she goes from here. It’s interesting to note that this backup series plays out like an old movie serial. Each chapter brings another wrench to Harper’s journey, coaxing readers to tune in next time to see how she’ll figure her way out of this problem.

The Joker #6 returns to form after last issue’s flashback story. Guillem March returns to deliver a macabre, noir tone that helps set this series apart as one of DC’s best right now.