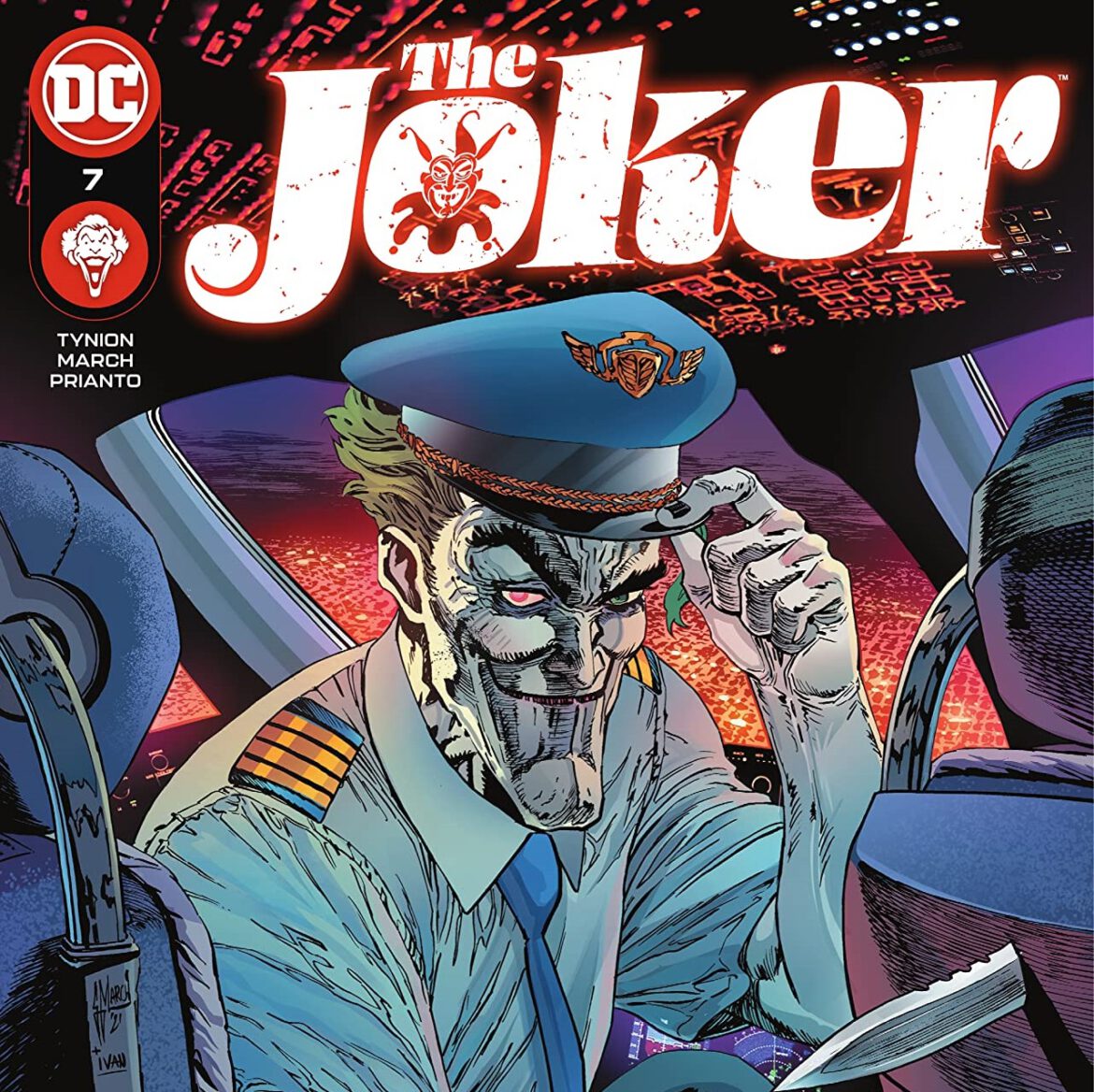 Overview: In The Joker #7, Jim Gordon teams up with Interpol to help track The Joker. Meanwhile, Barbara Gordon recruits Julia Pennyworth and unravels an even bigger conspiracy.

Synopsis: The Joker #7 begins in Pena Duro, the prison in Santa Prisca where Bane hails from, and a woman discusses the idea of a themed tourist destination with an associate of Bane’s (who died in Infinite Frontier #0). The woman, posing as an investor from a firm, is startled when a hidden cellphone rings in her pocket. This alarms the associate’s guards, who draw their weapons.

The woman answers the phone, telling Oracle that she’s busy and does not want to associate with the Bat-Family any longer, especially after what happened to her father. The guards open fire on her, as she’s breached their rule about no cell phones. While she runs, Oracle pleads with her for info on Santa Prisca. The woman agrees, only on the condition that she gets access to Batman’s intel in return. After the call is ended, the woman returns fire on her would-be assailants, telling them that she doesn’t like them turning the murderer of her father into a cash cow. She then reveals her identity as Julia Pennyworth.

Elsewhere, in an Interpol interrogation room in France, Jim Gordon impatiently waits for the agent who brought him in. She arrives, and he tells her that he’s played in this theater before. If Interpol had anything on him, he wouldn’t be sitting where he is. The agent plays it cool, then answers Gordon’s questions about the murder. Jim learns that Joker killed some scientists in a lab with a knife, and Jim’s fingerprints were all over it (see Gordon’s arrest in The Joker #6).

Gordon presses about the lab, and the agent tells him it was involved in the illegal cloning of human tissue. She then asks if Jim had ever heard of “The Network,” which he admits he has, albeit only once. This lab, she believes, belongs to The Network and is used to help fake deaths of rich people looking to hide.

The agent asks Gordon to dinner. She reveals that he had been waiting because it took some time to clear his name with the French government, but he’s free to go now. She also introduces herself as Chief Detective Isabella Hallows.

As The Joker #7 continues at the Clocktower, Stephanie Brown checks on Oracle. Oracle gives an update on the monitoring of her father, as well as reaching out to Julia Pennyworth. Steph notices on the monitor that Cressida is all dressed up and looking directly at the camera. That’s when both of them realize something bad is about to happen.

A Talon attacks Batgirl and Oracle. The two try to fight the Talon, and in the maelstrom, they’re both saved by Cassandra Cain. Together, all three manage to injure the Talon, who then flees the scene.

After the fight, Oracle notes that this Talon felt pain, which suggests that there’s something strange about this whole ordeal. She also sees that Cressida is gone in the monitors, surmising that the attack was just a distraction, so Cressida could escape surveillance.

In Paris, Gordon and Chief Detective Hallows enjoy a meal together. They banter and flirt back and forth, displaying mutual admiration and respect for each other. Gordon surmises that Hallows wants something, guessing that it’s information on “The Network,” which Joker might accidentally reveal in his international ventures. Hallows offers her resources to Gordon in exchange for information on The Network, noting that the only condition is that no one can know that the two are operating together.

Gordon points out that that might be a problem. Just then, Bane’s daughter appears behind Chief Detective Hallows.

Analysis: After several issues dealing with Jim Gordon’s trauma and personal failings both as a husband and a police officer, The Joker #7 takes a different turn. Writer James Tynion IV and artist Guillem March treat readers to more of a classic, international spy thriller. March even goes so far as to recall classic James Bond-esque imagery with this series’ introduction of Julia Pennyworth, who holds her gun and assumes a stance much like Bond.

Beyond the imagery, every aspect of this issue has the hallmarks of a classic spy thriller. For starters, there’s a shadowy organization called “The Network,” and it has remained mostly hidden from the limelight until now. In The Network’s faking of a Talon attack, one can assume that this organization is perhaps older and more powerful than The Court of Owls.

There’s also Jim Gordon’s traveling abroad, hunting down the Joker at every turn. Whereas the Gordon scenes are more self-reflective and provide retrospective commentary on his former career as a lawman, the juxtaposed introduction of Julia Pennyworth brings that fun, adrenaline-fueled energy of an action film.

Lastly, even the classic spy thriller romance is present in this issue. Gordon and Hallows are both older, more experienced officers of the law, which fosters a mutual admiration in each of them, but beneath that surface, there is clearly something more going on between these two. The biggest clue is during the dinner scene when Hallows reveals that she’s been reading about Jim. The panel immediately after shows Jim with half of a smile on his face, looking hopefully at Hallows as he says, “Good things, I hope.” In the reflection of his glasses, readers see Chief Detective Hallows, who is staring directly at Gordon (and at the audience). Throughout the panels, the two flirt in different ways. In one panel, Hallows rests her chin on her hand while she looks at Gordon. In another panel, her one, bright, blue eye is the sole focus as she seemingly loses herself in our protagonist’s gaze.

Despite a momentary reveal of his hand, Gordon plays the rest coolly, keeping his head in the game (just as we would expect our spy thriller hero to do). In doing so, this adds another layer that suggests that perhaps Hallows is flirting with Gordon in order to get him to reveal all of his cards. It’s complicated, but it hits the right note in adding layer upon layer to what was originally a much simpler story about a former lawman taking on this Joker case as a way to find closure and bring an end to his nightmares.

All said, The Joker #7 is a beautiful issue, and arguably, it’s the most fun entry in this series to date, especially, albeit brief, the banter between Barbara Gordon and Stephanie Brown. There’s kinetic energy between them that adds a much-needed spark to what would be so much subterfuge and plot otherwise. Tynion and March do a great job balancing that spy thriller intrigue with dashes of fun throughout.

Synopsis: As the backup in The Joker #7 begins, Harper Row hides in a locker. Punchline and her gang, including Orca, enter the locker room and start searching. Punchline and Orca argue a bit, with Punchline questioning the loyalty of her number one henchwoman.

Orca opens the locker that Harper is hiding in, but Orca either doesn’t see Harper or pretends not to. Either way, this gives Harper the opportunity to escape into a vent right as Orca destroys said locker to prove loyalty to Punchline.

Harper then sneaks through the vents and picks up her phone, grabs some clothes, and snags a few snacks. She then finds Kelly Ness hiding out in the counselor’s office. Harper tries to convince Kelly to aid in putting Punchline away, but Kelly tells Harper that she needs to leave, as this hiding spot has been compromised.

Elsewhere, Cullen Row is hanging out with his friend, Blush. Blush takes his shirt off, and it’s revealed that he has a tattoo of playing cards. Cullen immediately assumes it’s a Joker-related tattoo, but Blush assures Cullen that it’s not. It’s revealed that this so-called friend is part of the Royal Flush Gang, the one Punchline recently deposed the leader of in Blackgate.

Analysis: Finally, this story starts going somewhere! Harper has found Kelly, and so the quest has grown from finding evidence to keep Punchline locked away to keeping said “evidence” alive long enough to testify. Along with this, Orca may or may not be teamed up with Harper somehow, and Cullen’s friend Blush is revealed to be part of the Royal Flush Gang, who may use Cullen as a way to get to Harper.

Sweeney Boo’s art and colors are vibrant and fun. Despite most of this story taking place in Blackgate, Boo’s coloring adds a sense of whimsy and wonder to the setting, casting everything in shades of blues and purples (which, most likely intentional, perfectly matches Harper’s hair).

This chapter is better than previous ones, but the story as a whole is one readers can take or leave. It feels unimportant, and the fact that it’s disconnected from the main storyline in this series doesn’t help its case.

The Joker #7 adds new players, a bit of romance, and more layers to the globe-spanning conspiracy that Jim Gordon (and team) must solve, and it does it in a way that’s thrilling, smart, and subtle.