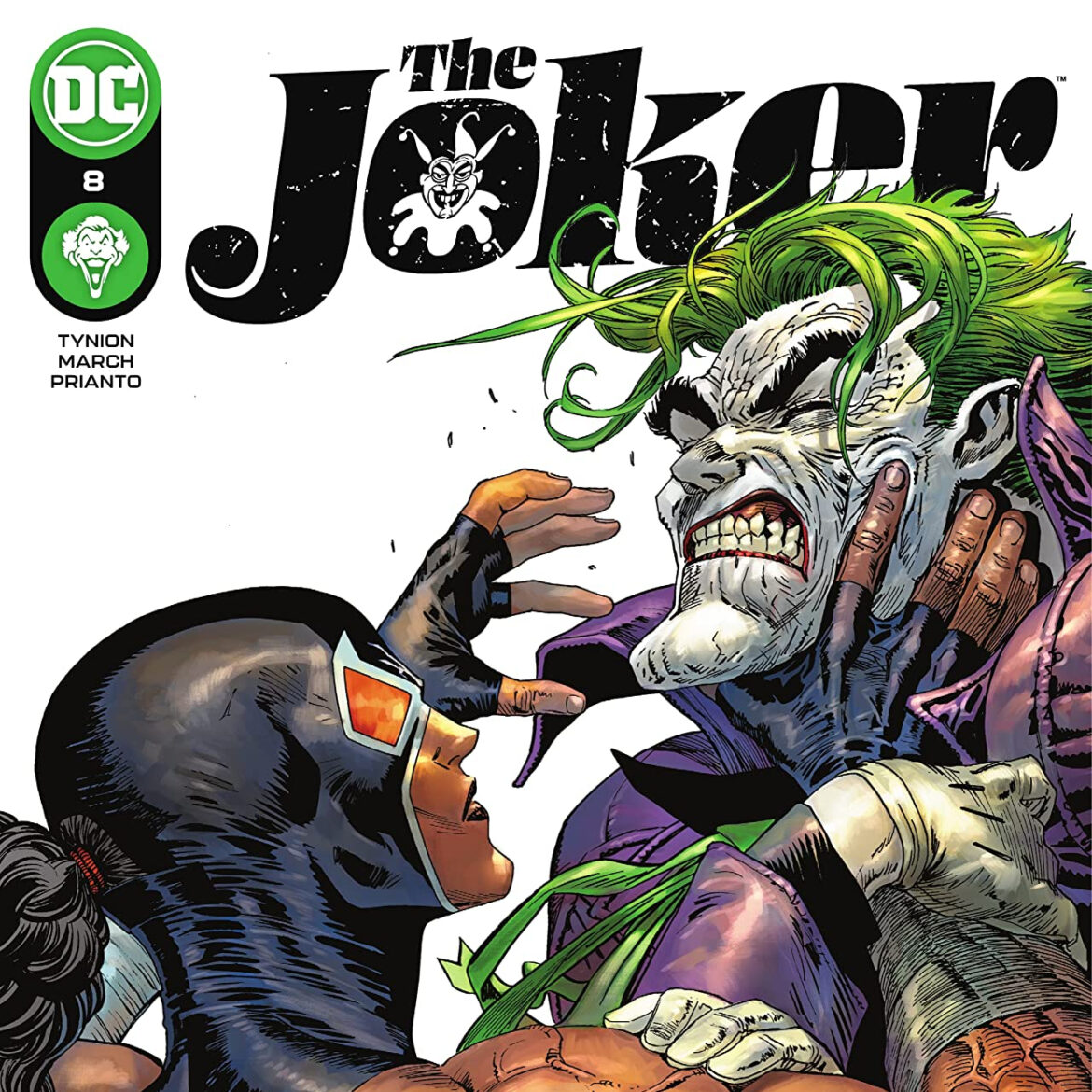 Overview: In The Joker #8, Vengeance, heiress to the mantle of Bane, abducts Jim Gordon and offers a partnership to kill the Joker.

Synopsis: Spinning out of the cliffhanger ending of The Joker #7, wherein Bane’s “daughter,” Vengeance, confronts Jim Gordon and his new Interpol agent friend during dinner, The Joker #8 opens with Chief Detective Hallows aiming her gun at Vengeance. Before Hallows can fire, Vengeance disarms her with bare hands. Jim tries to intervene, but he is knocked away and left helpless to watch as Vengeance brutally takes down Hallows. After she’s done, Vengeance abducts Gordon.

Later, Jim awakens in the back of a car. He’s tied up and gagged, but he can hear French police shouting in the distance. Vengeance is trying to leave the Port of Marseille. She rips off a car door and uses it to take down a whole squad of police, including a police helicopter. Afterward, Vengeance carries Jim to a boat, and the two jet away from the smoldering wreckage Vengeance left behind.

The first question Jim asks is whether or not Chief Detective Hallows survived. Vengeance tells Jim that Hallows was recovered alive, and if the medical treatment she receives is any good, she should live. Jim continues to question Vengeance, asking who she is and what she wants.

Vengeance tells Jim that she visited the laboratory Joker attacked in France. Hidden beneath the laboratory was another secret lab. There, Vengeance’s army began torching the place without her saying so, suggesting that they had their own ulterior mission. Within the secret lab, Vengeance found DNA samples of many costumed heroes and villains, some of which were missing. Batman’s, for instance, was missing.

Vengeance also discovered a file that Joker had been left for her with a note. It was called “Bane Mark II: Vengeance,” and it detailed her origin. In the origin, we learn that Bane was given his backstory and hatred for Batman through some form of conditioning. It was planted rather than organic, but Bane was also too charismatic and clever to be controlled. For their second Bane, the leaders of Santa Prisca grew a test tube baby addicted to Venom and conditioned the baby to obey their every order. This baby would grow into Vengeance.

After the flashback, Vengeance tells Jim that she killed the army that she had arrived with. Jim asks if she’s going to kill him, and Vengeance tells Jim that she wants his passion. She then goes on detailing every horrible thing she would do to the Joker when she captures him. Vengeance knows that this hatred is programmed in her, so she wants to align with Jim and use her programming in his service, since he is a good man on a true mission of vengeance. Once Joker is dead, she will be free to determine her own path.

Jim dismisses Vengeance, telling her that he doesn’t even know where the Joker is. Vengeance then tells him that the chief scientist who made her wasn’t among the dead in the lab. That means Joker abducted the scientist, and the two most likely went to the scientist’s private estate in Majorca.

Analysis: The Joker #8 brings with it a slowing down of the story as writer James Tynion IV and artist Guillem March focus exclusively on Jim Gordon and this newer Bane model, codenamed Vengeance. After abducting Jim Gordon from his semi-romantic dinner with Chief Detective Hallows, Vengeance tells her origin story and also reveals the true reason why Joker was in France. We now know that the Joker was there to collect a DNA sample or two, one of which may have belonged to Batman.

Vengeance’s origin story is pretty simple. She’s a test tube baby that was born and raised to serve Santa Prisca. Apparently, Bane was model one, but he commandeered too much freedom of thought to be controlled by the leaders of Santa Prisca. With Vengeance, she had advanced conditioning to make her more docile to those who control her, and now that she knows this, she wants out. For her, escaping her captivity means killing the Joker for Gordon (rather than her employers) and disappearing once her programmed mission is accomplished. Since she has no beef with the Clown Prince of Crime, Vengeance wants to ally with Jim in order to have a sense of purpose to her killing. This concept comes across as convoluted, but it serves the greater function of both allying Jim and this Bane look-alike and also providing a breadcrumb on where Jim can track Joker to next. Plus, at least we have a sense now of what or who Vengeance is.

On that note, I can’t say that I’m a fan of the original Bane being some kind of fabricated creation whose hatred of Batman was implanted. I prefer the Bane seen in the pages of Tom King’s “I Am Suicide” arc, wherein Bane is a foe cut from a similar cloth of Batman. Like Batman, he had the proverbial “one bad day” that pushed him to become the supervillain that he is. With Tynion layering in this idea that Bane was “programmed,” it takes a bit of the bluster out of one of Batman’s greatest enemies.

Because of The Joker #8, we also have a better idea of what the Joker is up to. He is proactively seeking this shadowy organization that has DNA on heroes and villains and most likely plans on using it for his own purposes. Furthermore, readers are provided with a clue that might suggest that the organization that Cressida works for (the one who hired Jim Gordon and pretended to be part of the Court of Owls) could be related or part of the same entity that rules over Santa Prisca. This isn’t confirmed, but there is some kind of connection there.

The Joker #8 provides a fun playground for Guillem March’s artwork. Most of the issue’s pages are devoted to Vengeance in action. Whether she’s disarming Hallows with her bare hands, wielding a car door like a shield or a projectile, or piling the corpses of her own men to the backdrop of a raging fire, March is given an opportunity to really make this issue an intense exercise in super-powered mayhem. Quite frankly, it’s cool. March doesn’t miss a beat, showing readers how much of an absolute powerhouse Vengeance is. She more than earns her keep as the new Bane, and she clearly terrifies Gordon, if his eyes are any indication.

While the story makes an about-face from plot-boiler detective narrative to an over-the-top action-adventure, The Joker continues to plug along, delivering fun, all the while peeling back a global conspiracy, layer by layer.

Synopsis: The backup in The Joker #8 begins at Kelly Ness’ hideout, as both Harper Row and Kelly hear a rap at the door. In walks Orca, who tells them that they need to hide. Orca’s on their side. She’s tired of being used as a weapon, and she agrees to provide a distraction in order for Harper and Kelly to escape.

Harper uses her magnetic implants in her fingers to find an electrical box. She’s going to temporarily shut everything down and open up the windows, so the two of them can escape. Before Harper can get to work, Punchline calls Harper out over the intercom, and it seems like she’s going to accomplish that jailbreak for the duo.

Punchline sends an army after Kelly and Harper. The two run past a horde only to come into contact with Punchline and another group of criminals. Harper and Kelly fight, but they are losing ground. Orca enters the fray, providing them with the perfect opportunity to escape. As Orca is stabbed by Punchline, Harper carries Kelly outside of Blackgate.

Analysis: If the main story in this book is the delicious cake, this Punchline back-up is the can of sardines that has been opened and drizzled on top of said cake. Nothing really has progressed from last issue, except for Orca confirming that she’s switched sides yet again. The backup in The Joker #8 tries to go for heart with Orca opening up about how she feels used because she looks like a monster, but it’s such a short backup, that there’s no real punch to the emotion. Orca delivers her lines, Harper and Kelly flee, and that’s it. There’s no real weight to it.

There have been so many twists and turns, so many convoluted about-faces to this Harper Row backup, that each installment feels like it’s dragging the overall narrative out and going nowhere. The focus has long disappeared, and characters are still struggling to accomplish the same feats they’ve been trying to accomplish since The Joker #1.

Other than feeling like an old-fashioned serial that used to prelude movies, it’s hard to gauge who this story is for or what it’s purpose is. It just feels like a vehicle that shows up every month to remind us that Punchline is a character and that Harper Row exists too. This problem isn’t so much on the creative team as it is on the format. The long-form monthly backup just doesn’t have enough pages set aside to allow it to build up any tension or sense of direction, and that’s a shame because there are good characters in these pages. They just aren’t being used well.

The Joker #8 finally tells us what the deal is with Vengeance, Bane’s replacement, and why she’s chasing Joker. The street-level cop narrative disappears this issue in lieu of an action thrill-ride, but Tynion and March show readers that they’re more than capable of delivering an adventure as fun as the noir-style story they’ve been delivering thus far.