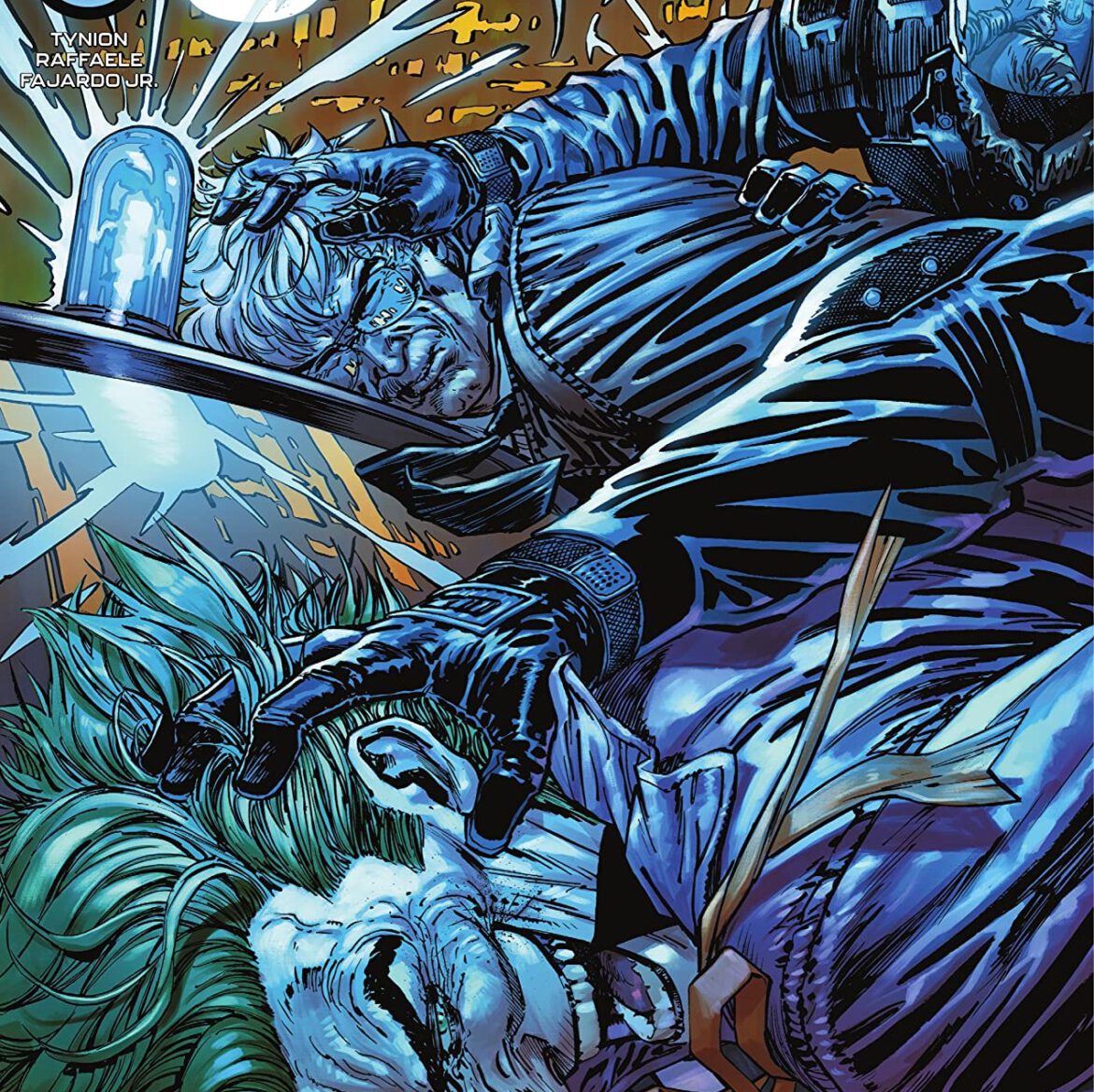 Overview: In The Joker #9, Vengeance and James Gordon catch up to Joker in Majorca and reveal new, unsettling details about the Network.

Synopsis: As The Joker #9 begins, James Gordon is riding shotgun as Vengeance drives toward the private estate of the scientist Joker abducted. During the drive, Jim tells Vengeance about all of the times Joker nearly ruined him. He tells her about Joker crippling Barbara (Batman: The Killing Joke), about the death of his second wife (Batman: Cataclysm), and about the recent death of James Gordon Jr. (Batgirl #49). Jim knows full well that he’s giving Vengeance what she wants, a justified reason for killing the Joker. He also knows that he can’t call Batman now, that deep down, Jim doesn’t want the Joker to live anymore.

Back in Gotham, Barbara Gordon is looking for any clues left after the Talon attack at the Clocktower. She’s in communication with Julia Pennyworth, who is digging through files related to venom. Pennyworth notes that venom has a long history with deep pockets and ties to the U.S. government.

Jim Gordon and Vengeance enter the Majorcan estate of the scientist from the labs. Everyone is dead, and bodies are strewn all over the place. As they venture in further, they meet up with Joker and the scientist, both of whom are nestled in armchairs. Joker is drinking tea. Vengeance runs at Joker, but the scientist says a special code phrase that knocks her out temporarily.

The scientist, Dr. Friedrich Baum, tells Gordon that he should leave before the house explodes. Gordon refuses and instead sits down and asks Dr. Baum if he is part of the Network. Baum tells Gordon that he is, though he doesn’t like the silly name. He then offers to show Gordon and Joker his lab.

While touring the lab, Dr. Baum tells the pair that he started off creating body doubles for high-profile criminals, so they could skirt the law. The body doubles would die in the criminal’s place, which would allow the criminal to reenter the world as a free person with a new identity. Baum also figured out how to make brain-dead bodies to serve a number of high-profile cannibals. At this, Gordon balks and demands to know why Baum is just telling them this so plainly. It’s because Dr. Baum believes he will never see consequences for his actions, nor will the Network ever be revealed to the world.

Joker jumps into the conversation and lets Gordon know why he’s involved. Certain benefactors have paid to make duplicates of the Joker, but since he was reborn in a chemical bath, it’s proven tricky to make another Joker, and the one, true Clown Prince of Crime is upset that someone is trying.

There’s a crash, and Dr. Baum notes that Vengeance has woken up and is on her way into the labs. He tells Gordon that Vengeance is of a new class of supervillains that are better than the original. Gordon presses Baum on this, and Dr. Baum reveals that Gotham is a staging ground to advertise the designer villains he has been creating.

The door bursts open, and Baum orders Vengeance to kill Gordon and the Joker. Instead, a knife lands in Baum’s neck and the Sawyer clan enter the labs. The Sawyers knock out and abduct the Joker, and then they attempt to kill Gordon with a knife to the chest.

Gordon passes out, and he is awoken later by Vengeance. She demands to know where Joker is, and he tells her that they’re going to Texas. Vengeance leaves Gordon to die. He reaches into his pocket and calls Barbara for help. Barbara tells him that this whole thing is getting weird and personal. She did a DNA test on Talon blood that she found at the Clocktower, and it’s a match for James Gordon Jr.

Analysis: The Joker #9 is one big info dump (but in a good way). We finally get a sense of what’s going on with the greater conspiracy at play, and it’s bigger than we could have anticipated. In The Joker #9, Jim Gordon learns that Gotham City has been a staging ground for new designer villains created by the Network, and part of the potential interest of these villains is how well they match up against Batman. Jim also learns that Joker’s involvement extends to Mr. J not wanting to be a DNA source for designer villains made in his likeness. The Sawyer Clan, too, is wrapped up in this in that they’ve most likely purchased lab-grown human meat from the Network. They’re also upset that the Network failed to protect their Uncle Billy at Arkham.

The reveal about Joker is interesting in that this arc comes not too long after Geoff Johns and Jason Fabok wrapped up their Three Jokers story. In Three Jokers, there are three different Jokers running around, all created in a similar fashion to each other. While that book notes that it’s hard to create a true incarnation of the Joker, it’s not impossible. In James Tynion’s The Joker series, readers are led to believe that scientists have tried to duplicate the Joker to no avail. One could argue that the scientists failed because they basically tried to clone Joker, but it’s interesting nonetheless to see that fans have received two storylines involving multiple Jokers within a year or two of each other, both with differing results on whether or not more Jokers could be created.

One thing The Joker series excels at is making it feel important to the overall Batman and DC canon. Here at TBU, we don’t often speak to the importance of individual issues or series as they relate to greater Bat-canon because it’s hard to gauge whether a book will live on in years to come, but in this case, this issue makes a strong argument for its existence. In delving into Gordon’s backstory, Tynion weaves in The Killing Joke, Cataclysm, the recent Batgirl run, and Death in the Family — with three out of the four being landmark, well-loved stories. Referencing these stories makes this series feel important, as well as helps to justify the reasoning behind Gordon’s darker turn in his post-commissioner life.

Earlier on this series, Jim seemed on the fence with whether or not he wanted to kill Joker, but in The Joker #9, it’s made to believe that his mental back-and-forth might have been over killing the Joker with his own gun. Now that Gordon has Vengeance at his side, he seems to have no guilt over letting the Clown Prince of Crime die once and for all. As one of his old fellow Chicago police officers/mentors told him way back in The Joker #1, when you see the boogeyman, you shoot him.

Stefano Raffaele takes over art duties from Guillem March in this issue. The penciling comes across as cleaner and less gritty than we’re used to from March, which takes away a bit of that noir detective edge previous issues were aiming for. However, Raffaele’s art mostly complements the horror style that March brought to this series. The gore is there, and the lab is monolithic and never-ending. Some of the tunnels in Dr. Baum’s lab look like they were designed after H.R. Giger.  Raffaele does a great job with pacing and maintaining tension. This is especially important to note since we get a couple of surprise twists in this issue — the first being the Sawyers showing up and the second being Gordon’s near-death experience. Both of these moments play out wonderfully, adding to a series that is proving to be quite the page-turner.

Synopsis (spoilers ahead): The backup in The Joker #9 starts at Leslie Thompkins’s apartment, as Dr. Thompkins tells Harper Row that she can’t attend the trial because Punchline called her out by name. Having Harper there could jeopardize everything.

Kelly Ness tells the two of them that during high school, Alexis Kaye (Punchline) and Aiden circled a bunch of people in the yearbook, including Kelly. All of these people would later die during Joker War, except for Kelly, who ran. Kelly tells Dr. Thompkins and Harper that they don’t need her, they need Alexis’ old yearbook. It’s all the proof that the pair need to put Punchline away for good.

At Blackgate, Punchline has Orca strapped to a table. She tells Orca that she knows Orca’s a traitor. Then, Punchline injects Orca with a mysterious substance.

Analysis: We spent so many issues following Harper as she searched for Kelly in Blackgate and busted her out of prison only for Kelly to provide yet another MacGuffin — Punchline’s yearbook. The assumption is that this Punchline criminal case backup will continue throughout the rest of The Joker series, which is exhausting to think about. There’s no real point to this backup, and each issue is just another meandering part of a quest that feels more like padding pages than it does providing anything else. One MacGuffin leads to another, and our only saving grace is that this will have to end, eventually, by The Joker #14.

The Joker #9 pulls us deeper into a conspiracy that has been going on throughout Batman’s career, and we’re absolutely here for it! It’s haunting, ghoulish, and full of tension.