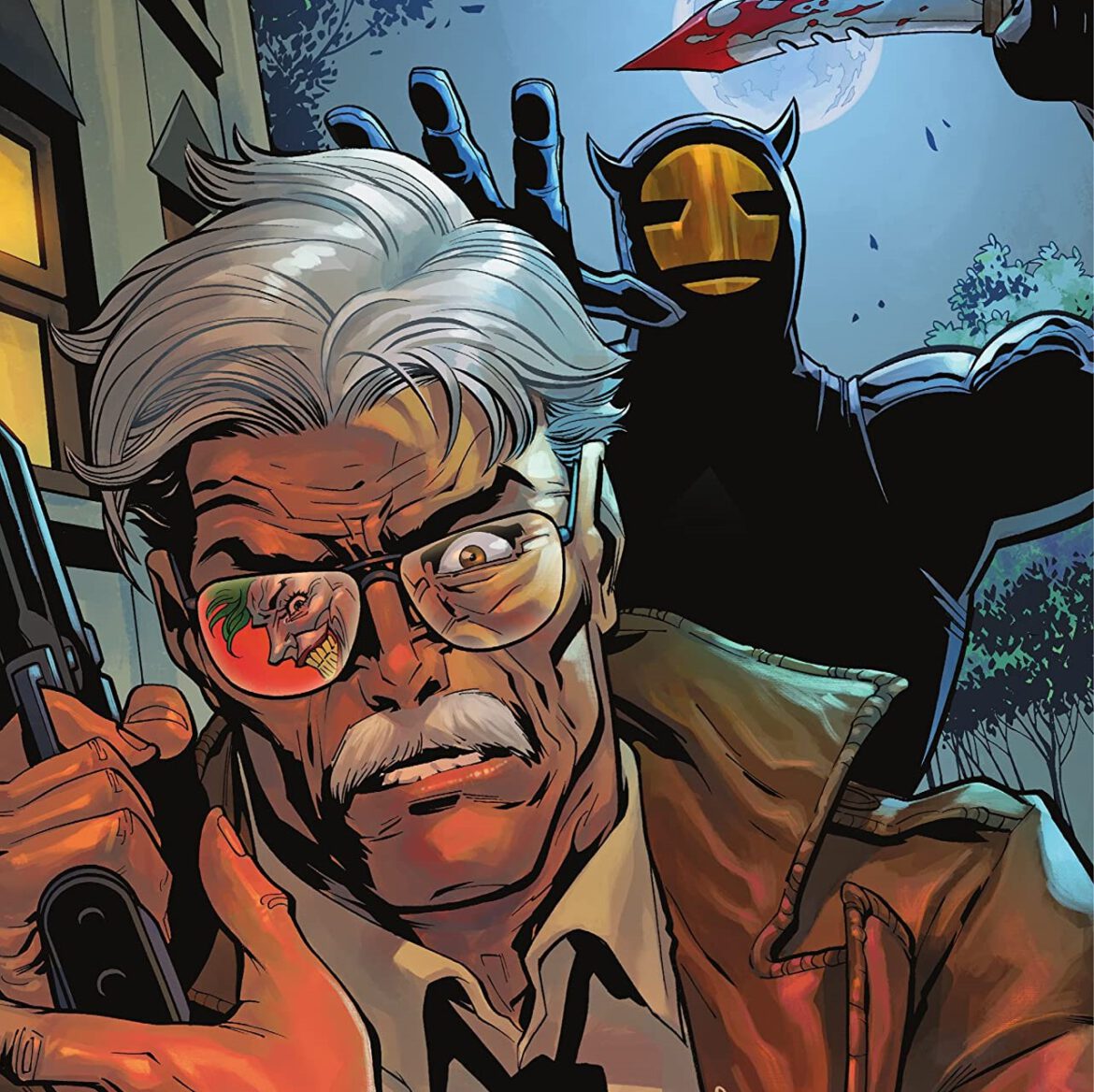 Overview: In The Joker #12, Jim Gordon finally meets the real mastermind behind all of this face-to-face.

Synopsis: The Joker #12 begins near Dallas Fort Worth International Airport, as a commercial plane begins its descent. There’s a rumble from the cargo hold, and Vengeance bursts forth, plummeting toward the ground. After she lands, she steals a pickup truck.

Aboard Barbara Gordon’s flight with Cressida, Cressida finally drops the ruse and tells Barbara that she knows about the spying. Cressida also reveals that Julia Pennyworth’s plane has been hijacked by a Talon. When Barbara asks why the Court of Owls is doing this, Cressida’s hulking protector knocks Barbara unconscious.

On Jim Gordon’s private flight to Texas, he tells Harvey Bullock everything. Harvey lets Jim know that he’s uncomfortable, that he’s nervous that the two of them are going to wind up dead. Jim proselytizes about the moral code, about trying to make the world a little bit better, even if someone rich and evil still makes money in the background. He says he’s too stubborn to give in, to make a buck for himself and ignore the shadows that get taller each year. Jim then tells Batgirl (Cassandra Cain) that he knows she’s hidden herself away on the flight. He tells her that he’s going to need her help.

Jim then calls Cressida, and when Cressida tells Jim that his services are no longer required (because they have Barbara), he retorts by informing her that he knows who was behind A-Day (the attack on Arkham Asylum in Infinite Frontier #0). Cressida and Jim agree to meet at a private airfield.

At the airfield, Jim tells Cressida that this isn’t going to go the way her employer wants it to unless Barbara and Julia are able to fly back to Gotham with Harvey Bullock. After some hesitation, Cressida agrees on the condition that the Talon goes with them.

Once aboard the plane, Batgirl takes out the Talon, and all of them fly back to Gotham. Once the plane is just out of sight, Jim tells Cressida that he knows who is really behind all of this. It’s Bane. The hulking protector standing behind Cressida puts on his trademark Bane mask and asks Jim if he understands what will happen next. Jim says that he does.

Elsewhere, Joker sits in a cell somewhere in Hooper County, Texas while a member of the Sawyer Clan sharpens a knife in the background.

Analysis: The Joker #12 opens with both an homage and a fun action piece that really sets the stage for the final few issues of The Joker series. In it, a commercial flight headed toward Texas experiences some sort of turbulence as Vengeance, the lab-grown daughter of Bane, bursts from the cargo hold and somehow manages to land without the need for a parachute. It’s both an exciting and gleefully ridiculous opener, and artist Giuseppe Camuncoli does a fantastic job penciling and laying out Vengeance’s explosive entrance. It’s the jolt readers need as writer James Tynion IV nears the finish line.

The opening also serves as an homage to The Dark Knight Rises. In The Dark Knight Rises, the film opens with Bane pulling a heist on a private flight, with the plane splitting in half midair. It’s a wild stunt that conveys the audacious power of the supervillain. In The Joker #12, Tynion and Camuncoli have taken cues, paying tribute by having Bane’s daughter pull a similarly audacious feat aboard a commercial flight. It’s cool, exciting, and imaginative in having the creator credits float around Vengeance’s falling body amongst the plummeting luggage.

From here, the issue obsesses over air travel. Cressida and Barbara Gordon are on one plane. Julia Pennyworth and Talon are aboard another plane, and Jim Gordon and Harvey Bullock take flight on yet another plane. Tynion uses this “travel” issue to cut out the extraneous players. Barbara Gordon and Julia Pennyworth, who seemed so crucial earlier on in the series, are sidelined with Harvey Bullock. Talon is taken off the table. All that remains are the Sawyer Clan, Joker, Cressida, Vengeance, Jim Gordon, and Bane, the mastermind behind everything. While readers finally get a reveal of the true threat, it’s a bit underwhelming. Bane seemed a likely candidate since the beginning of The Joker series, as Cressida was always seen escorted around by a hulking brute who masked his frame with a long coat and his face with goggles and a scarf. In a series rife with new players like the Sawyers or the Network, it also feels too safe.

This reveal also begs the question as to why Bane felt the need to entice the Court of Owls into this? Earlier on in the series, Barbara’s investigations led her to believe that the Talon wasn’t necessarily a true Talon. Yet, there was a moment shown where Cressida was shown with the Court of Owls. We also don’t know why Bane had to bring out all these players if he just wanted to crush the manufacturing of “designer” supervillains, and we’ve also been shown an about-face from Jim, whose mental deliberation on whether or not to kill The Joker has seemingly been decided off-panel, with him resolved to save Joker.

There are still two issues left in the series, so hopefully, Tynion and the creative team will be able to provide more clarity as to what’s going on in The Joker. Overall, it’s been a thrilling ride around the globe, and at the very least, we’re most likely going to see a bombastic and gory finish.

Synopsis: The backup in The Joker #12 focuses on the lead from Kelly Ness, as Bluebird (Harper Row) tracks down Aiden, Punchline’s friend from her teen years. Aiden is staging a hit on someone, and Bluebird assumes it’s Kelly. She takes down Aiden and handcuffs him, planning to bring him in to be used against Punchline.

Meanwhile, Punchline arrives at court for her big trial. Throngs of fans cheer her on.

Dr. Leslie Thompkins calls Bluebird, informing her that Kelly Ness is missing. While Bluebird is distracted, Aiden throws himself from an open window in order to tie up any “loose ends” that could harm Punchline.

At the courthouse, Cullen Row shows up and awaits the defense team. It seems he is to give testimony in Punchline’s favor.

Analysis: This Punchline backup story is also nearing its conclusion with the big trial finally looming around the corner. In essence, this issue is all about setting up the board before Punchline takes the stand. Aiden kills himself, and Cullen has seemingly sided with the defense. Harper also has only two issues to track down Kelly Ness and get her to testify on the prosecution’s behalf.

This backup chapter is better than many of the previous ones, but it’s too little too late. For those who have read every chapter thus far, most of this Punchline storyline has been about Harper Row chasing down one McGuffin to the next, which has been exhausting.

Writer James Tynion and his creative team clear the board as The Joker reaches its final few issues. There’s a cool action piece that opens The Joker #12, but the rest of the issue is devoted to making sure all of the pieces are in place.