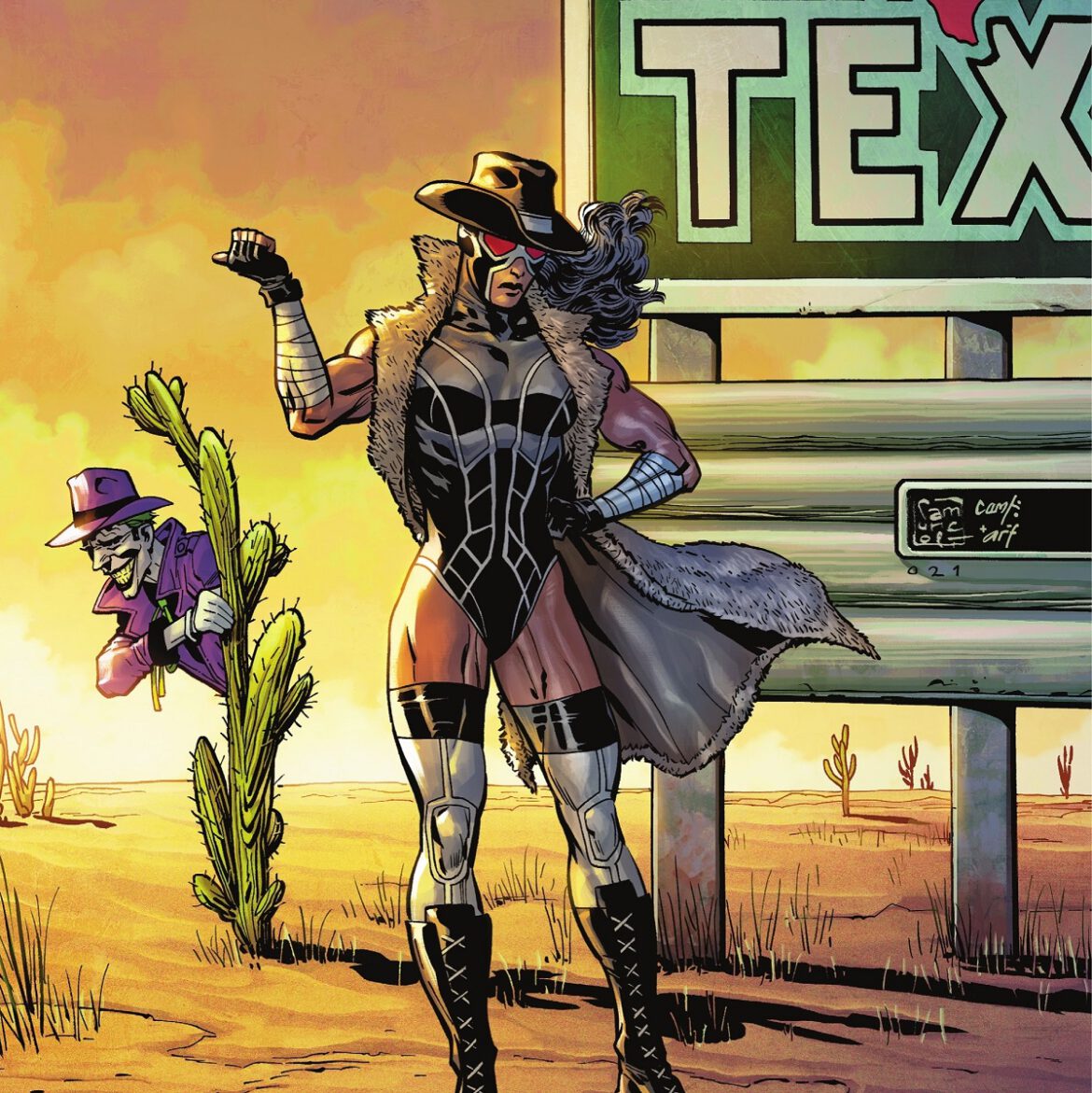 Overview: In The Joker #13, Jim Gordon and Bane arrive at the Sampson family compound just in time to stop Vengeance from killing Joker.

Synopsis: The Joker #13 begins at the Sampson family homestead, as Sawyer Sampson stands before his extended family, all of whom are enjoying a fine meal of human body parts. He tells them that they made a deal in order to live the good life. They offered up Billy the Brute in exchange for their life, and when Billy died at the hands of The Joker (during A-Day in Infinite Frontier #0), the people they made a deal with didn’t do anything about it. Tonight, Sawyer explains, they will avenge Billy by eating the Joker.

In a cage outside of the Sampson home, Joker taunts a cook who is busy putting together a meal. Before Joker can distract the cook, an explosion gets the attention of both of them. Vengeance, Bane’s daughter, has arrived.

Vengeance has torched the Sampsons’ oil wells, and she charges at their armed guards. Inside the homestead, Sawyer gets word of Vengeance’s attack. He calls the family members to arms, and they prepare to battle against this intruder.

Behind the house, Joker continues to insult the cook. He strikes a nerve when he insults the cook’s ability to make anything savory or tasty.

Out front, Sawyer sends Buddy Sampson at Vengeance, who literally punches Buddy’s head clean off. While Vengeance engages with some of the family members, Sawyer grabs Vicky Sampson, and the two flee to a safe room. When Vengeance reaches Joker, she finds that he’s freed himself and tossed the cook onto the grill.

Analysis: The Joker #13 is the penultimate issue in The Joker series, but in reading this issue, you wouldn’t have guessed that the next installment is the finale. Rather than leading readers to a conclusion, The Joker #13 meditates on the Sampsons while Jim Gordon provides some narration about how strange and alien wealthy people are.

The rest of the issue is devoted to action. Vengeance has arrived, and her arc comes full circle. She has her encounter with the Joker, using Gordon as her excuse to exact vengeance in someone else’s name (other than her creators/handlers). Joker easily rebuffs Vengeance’s proclamations of justice, straight up telling her that there will never be anything noble or noteworthy in what she’s doing. In Joker’s opinion, Vengeance is merely a tool, a lab-created “nonperson” who will always be disposable. Before Vengeance can beat Joker to death, Bane arrives, but this issue ends before anything important happens.

There are still so many loose ends to tie up, and it’s hard to imagine many readers will see a satisfactory end in next month’s finale. Readers still don’t know much about the Network. The Sampson family has been mostly destroyed, and their source of wealth was set on fire by Vengeance, so it’s easy to see these Tynion-created villains retreat into the shadows. However, we don’t know why the Network turned its back on the Sampsons in the first place, nor much of the shared history between this cannibal family and the supergroup of elites beyond a couple of trite flashbacks concerning the Sampsons’ origin.

While we know Bane set out to root out the Network and their designer villain program, readers don’t know why he set this plan in motion in this exact way. Why involve the Joker? Why hire Jim Gordon? Why create this globe-trotting adventure? Why invoke the Court of Owls?

Lastly, we don’t have much closure for Jim, either. In the last couple of issues, he’s been sidelined for the greater plot. While he provides some narration for the intro of The Joker #13, he disappears shortly thereafter, and we’re no longer viewing this whole event and debacle from Jim’s perspective. This is a shame because throughout The Joker series, seeing this story play out through his eyes, through his sense of self and his fear and his emotion — that’s what elevated The Joker above the standard DC Comics maxi-series. With this action-heavy issue, the series feels like it’s ending in the same way every big event or maxi-series has to end. The game board and the pieces need to be put back on the shelf, and nothing can change in any way that’ll affect the greater DC Universe. Once again, readers have been teased with something that initially felt like it aimed higher.

Giuseppe Camuncoli continues art duties on this issue, and it’s apparent that he relishes in the icky horror vibe of The Joker. Camuncoli treats readers to a whole buffet (literally) of human body parts, and when the shooting starts, he doesn’t let up. Pieces of flesh sizzle throughout this goofy and gory issue. Vengeance punching off a guy’s head and ripping off the arm of another family member with her bare hands is a bit out of sync with the dark and moody vibe of earlier issues, but it proves fun enough to keep readers engaged. One can really tell that Camuncoli enjoyed putting this issue together.

The last page of The Joker #13 sees the return of Bane. It’s a bit jarring because in previous issues, though hidden behind clothing, he looked like a zombie (which would make sense because he “died” in Infinite Frontier #0). In this issue, Bane looks perfectly fine. Was he wearing pale makeup this whole time, too?

Synopsis: Court is in recess, and Bluebird calls Dr. Leslie Thompkins to check in on the proceedings. Leslie lets Bluebird know that things aren’t going well, but she’s hopeful the jury can see past it.

When court resumes, the defense calls a guard from Blackgate to the stand, who attests to Punchline being a model inmate. The guard notes that Orca attacked Punchline and also caused the riot seen a few issues ago. When the defense lawyer puts together an image of Punchline as both a victim of the Joker and a victim at Blackgate, he calls her to the stand.

Dressed in her Punchline outfit, Alexis Kaye pleads her innocence, telling the court that she’s one of what could be many future victims of the Joker. If she’s convicted, it’ll only solidify her belief that Gotham loves the Joker and just won’t acknowledge it, offering up her as a sacrifice instead of him.

Afterward, the defense calls Cullen Row to the stand. After getting him to confirm that Harper Row has gone to Blackgate to visit their incarcerated father, the defense asks if Cullen can identify Harper as one of Punchline’s attackers in Blackgate. He tells the lawyer no, then further admits that the Royal Flush Gang wants him to lie on Punchline’s behalf.

While the jury deliberates, Cullen talks with Dr. Thompkins. She tells Cullen that he perjured himself and that she worries for his safety. Within forty-five minutes, the jury is back in court, and they find Punchline not guilty.

Analysis: Unlike previous installments of this Punchline backup, there’s actually some tension this time around. Up until this point, the series has cast Cullen Row as a counter to Leslie Thompkins and Harper Row, setting him up to be the one who ultimately leads to Punchline’s freedom. This is not the case, as readers are briefly given hope that Cullen will be the one who lands Punchline back in Blackgate.

Instead of ending at Cullen aiding the prosecution, however, this issue ends with the jury finding Punchline not guilty, rendering Cullen’s whole testimony a moot exercise in page filling. This issue is the one instance where cutting the backup short and leaving readers hanging until the finale in The Joker #14 would have been more effective.

In the beginning, The Joker series promised much with a Jim Gordon-centric narrative of a broken-down ex-cop on the hunt to kill Joker once and for all. In this penultimate issue, the moody, noir-inspired detective story has been stripped away for your standard, run-of-the-mill action comic. It’s not bad, but The Joker has lost what made it exceptional.