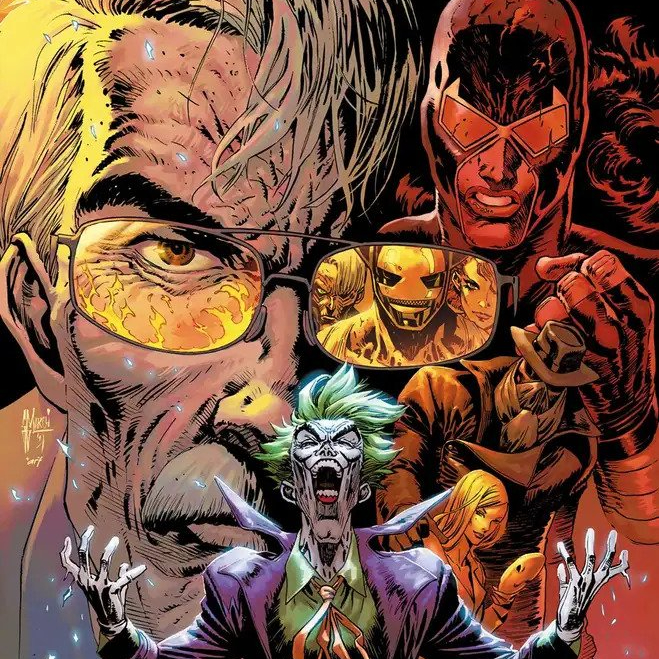 Overview: In The Joker #14, Jim Gordon returns to Gotham, and everybody from Batman and Oracle to Detective Hallows wants to know what Jim did to Joker.

Synopsis: The Joker #14 begins three weeks after the bloodbath at the Sampson Family compound in Hooper Texas (see the last issue), as Jim Gordon sits in an interrogation room. A very-much-alive Detective Isabella Hallows enters and questions Jim about the events from the last issue. Jim denies being there for the bloodbath and claims to only have arrived after.

On the news, we see reports of Vicky and Sawyer Sampson being arrested in the aftermath, and stories of the Sampson Family’s cannibalism broadcast far and wide.

Hallows questions Jim about Vengeance and Bane, and Jim denies seeing either one of them, even going so after as to say that last he heard, Bane was dead. When Hallows asks Jim about Joker, noting that she knows Joker and Jim were on the compound at the same time, Jim just leans back and smokes his pipe.

Three weeks ago, Bane stops Vengeance from killing Joker while Gordon watches. Bane and Vengeance fight, but Bane easily takes his daughter down. He tells her that her fury blinds her, and she is a willful puppet of their masters. Bane wishes his daughter to break free of her programming.

While the father and daughter fight, Joker contemplates making a run for it. Jim stops Joker, escorting him away from the fighting.

Sometime later, Jim arrives back in Gotham City. He walks the city and picks up on the recent news he’s missed (such as the events of Fear State), and he monologues about how Gotham is akin to a nightmare that never changes. While riding on the subway, Jim talks about the darkness that permeates Gotham and how people let this horror in. He’s about to lay the beat down on a teen with a clown mask when he thinks the better of it and lets the teen free.

After the subway ride, Jim calls his daughter, Barbara. She hasn’t forgiven him for what he’s done for the Joker, but she does want to warn her dad that Batman knows too. As Jim reaches his home, he ponders if his idealistic younger self would ever forgive his older self for what he’s just done.

Back at the Sampson home, Gordon escorts Joker to Cressida. When asked what she wants with the Joker, Cressida admits that she doesn’t really care about him. Her father was a grandmaster of the Court of Owls who fell from grace, and she’s been looking to strike back at both the Court and the Network. She teamed up with Bane to help draw out the Network and the Santa Priscan leaders who were using cloning technology to flex their muscle, and the plan was to use Joker as an agent of chaos to put this whole event in motion.

After Cressida explains what she wants, Joker asks Jim what his deal is. Jim references something an old partner told him long ago in a bar in Chicago (The Joker #1). Then, Jim draws his gun on Joker.

Back in the present, Jim enters his dark apartment building, pulls out two glasses, pour two drinks, and tells Batman to come on out. Batman demands to know where the Joker is.

Analysis: The Joker #14 fills in some of the missing pieces on Bane and Cressida, but more importantly, it refocuses the narrative back on Jim Gordon. His moody, neo-noir narration returns as he endures an interrogation from former love interest Detective Isabella Hallows. Once on a first-name basis, she demands that Jim refer to her by her proper title. It’s a nice touch, and it tells readers everything they need to know about where Jim and Isabella’s relationship stands after Vengeance’s interruption of their dinner date so many issues ago.

Writer James Tynion settles the action from the last issue mostly off-panel, but it serves a purpose. Like the ending of a noir classic or two that this series takes its inspiration from, the protagonist, Gordon, holds all the answers everyone wants. This issue is a tease in that way, making readers wait for one more issue until all is revealed with Joker’s whereabouts.

But this choice is for The Joker #14’s betterment. As Jim mentions in his narration at one point, this wasn’t really about Joker. Joker was the catalyst to so many things — Jim’s nightmares, Bane and Cressida’s plot, and all the chaos that ensued in the last fourteen issues. However, this story has and continues to be about Jim’s evolution as a character. It’s about his aging from a young, idealistic cop into a jaded ex-commissioner who sees Gotham as various shades of gray. It’s about a man who made mistakes in his pursuit of perfect and pristine justice, and from those mistakes, Jim came to see darkness around him that he once shrugged off, even when an old partner back in Chicago warned him not to.

At its core, The Joker series is a fun, twisted, crazy plot boiler, but it’s also a deeply personal exploration of an often overlooked character integral to Gotham and Batman’s world. It’s about why people change. It’s about failure. Most importantly, it’s about learning how to cope and live with oneself.

Giuseppe Camuncoli continues art duties for The Joker #14. While Camuncoli’s linework is cleaner and more pristine than Guillem March, it’s no less effective at creating a mood. Camuncoli does a great job keeping the beats in order in this issue, oscillating between the action scenes and the cool, noir-inspired moments alone with Jim Gordon. Arif Prianto’s colors are also certainly wonderful to admire.

Synopsis: The backup in The Joker #14 sees Madison a soldier who is captured in an attack overseas. Her captors torture her, and when she’s finally free and discharged from the military, her boyfriend leaves her. She no longer has a sense of humor, and he can’t take it.

Madison sleeps in an alley when Punchline comes calling, gassing all of the other bums in the alley with her homemade neurotoxin. Madison is fascinated by Punchline and obsessed with her laugh.

One eve during Joker War, Madison sends Punchline a message. Punchline returns, seeing the half-Jokerized Madison waiting for her. The two battle and Punchline is confused as to what Madison wants. Madison wants more punishment, she wants more abuse that makes her smile.

Madison asks for another joke, and Punchline gives her more Joker toxin. As Punchline leaves, Madison chomps down on the canister of gas.

Analysis: There’s certainly a mood and an idea the creative team for this backup is playing at, and it fits nicely with the Punchline court case that has consumed every previous issue of The Joker series. At the same time, like those other backup chapters, this still feels disjointed from the main narrative and does little to add to the overall story. It does earn credit for striking a closer mood to the Gordon narrative though.

The Joker #14 gets back on track with the personal, tragic, and downright moody Jim Gordon narrative that makes this series excel.