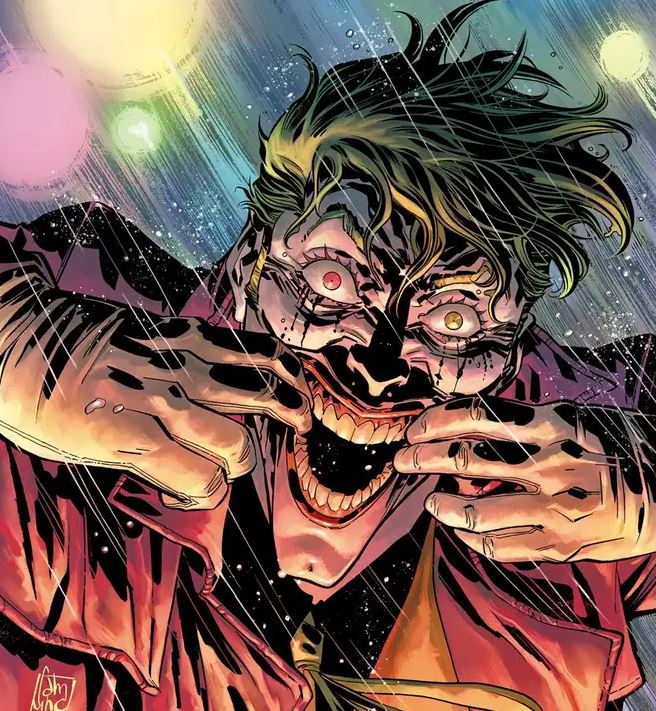 Overview: In The Joker #15, Jim Gordon puts the puzzle together in his debrief for Batman and then sets off on the next stage of his journey.

Synopsis: The Joker #15 begins years ago, as Jim Gordon stands atop the GCPD building waiting for Batman. Batman arrives, and Jim tells the Dark Knight that Joker is about to hit the water reservoir.

In the present, Jim reflects on this moment, thinking back to how naive he was. Back then, he thought cases like the Joker were an aberration and that he and Batman would be able to clean up Gotham City for good. Batman asks Jim where Joker is, and Jim answers honestly. He doesn’t know.

Jim tells Batman that he’s going to piece together everything he knows. Originally, he was hired to kill the Joker, and he thought about following through, too. However, Jim uncovered something interesting. An organization called the Network is about to fall. From there, Jim relates what he knows about the Network.

It’s a group of depraved rich people who lure villains to resorts, so they can lie low. This organization believes battles between superheroes and supervillains are great distractions, so the Network can work in the shadows. They were going to create their own designer villains using DNA they took from villains that used their resorts.

Jim tells Batman that Cressida Clarke, daughter of a man who was cast out of the Court of Owls, the Network’s funding source, teamed up with Bane to tear this organization down. They framed Joker, and they set Jim on a globe-spanning adventure to piece this mystery together and turn it over to the authorities. It mostly went according to plan, with Joker destroying Network labs in his reign of terror.

Jim asks Batman to join him on the roof. The two move, then continue their conversation. Jim makes small talk about Batman’s yellow emblem, but Batman steers the former commissioner back to his story.

Barbara Gordon got caught in the middle, and the Sampson Clan was an anomaly not initially part of Bane and Cressida’s plan. Barbara also had a piece of the puzzle that Jim didn’t. Namely, the Talon that attacked Barbara wasn’t just any Talon. It was James Gordon Jr., resurrected and trained to attack her. Barbara took him down, then vowed to figure out a way to resurrect him for real.

In Texas, Cressida gets access to the Sampsons’ safe room and escorts Jim and Joker inside with her. Once inside, they are greeted by Sawyer and Vicky Sampson. There’s a fight, and Sawyer is subdued. Jim tells Joker that he once saw Mr. J as his personal bogeyman, but he’s seen true evil these days, and he’s going to aim for the head.

Back in Gotham, Jim tells Batman that he’s exhausted and that he’s lost that fire that once fueled him to do good on the GCPD. He tried coasting for a while, but that fire never came back. Jim says he’s going to do something else now, but he notes that he still sees that fire in Batman and Barbara Gordon.

Outside of the safe room, Vengeance tries to beat her way in, but Bane stops her. Bane then convinces her that Joker is not her enemy. He offers to join her in striking at their true enemies, the people who programmed her and set her loose. Vengeance agrees.

Inside the safe room, Joker shoots Cressida and leaves. Jim tries to save her, but it’s too late. She’s dying. With her last ounces of strength, Cressida pays Jim the full amount she promised, so he can keep the good fight going and tear the Network down.

Back in Gotham, Jim tells Batman that he’s working with Isabella with Interpol, and he’s going into private practice with Harvey Bullock, so he can keep chipping away at the Network. One way or another, he’s going to make some small corner of the world a little bit better. He tells Batman that Sawyer Sampson was happy to talk and throw the Network under the bus, so that aids his quest.

That night, after making a few more phone calls, Jim sleeps soundly for the first time in a long while. He doesn’t hear the laughter anymore.

Analysis: The Joker #15 is mostly an exposition dump, but like any great noir story, the protagonist puts all the pieces together and lays out a clear portrait of everything that’s happened. Though this title is called The Joker, the true protagonist has always been Jim Gordon, and like any noir hero, he starts in a place where the chips are down. Jim, no longer the bastion of Gotham’s best, lives in a world of moral grays, and he’s been mulling over whether or not he should have killed Joker when he had the chance.

In this final issue, much to the surprise of no one, Jim hasn’t murdered Joker once and for all. However, though Jim denies it in that conversation with Batman, a passion returns to the former commissioner of Gotham City. He’s old and tired, but he’s found something new to put his hope in. In this last issue, readers learn that Jim has uncovered a secret organization called the Network and has brought it to its knees in his investigation. He’s found a true power beyond the tights and capes, a true organization of terror that exists above superhero and supervillain battles. Though Jim has donned the Batman cape and cowl before, more often than not, he prefers his gun and his badge. He’s a cop at heart, a street-level detective who has little use for the colorful costumed game. In this way, the Network is a fitting villain for Jim, a true devil for him to aim and shoot at.

In the final pages of The Joker #15, Jim has decided to go into private practice with Harvey Bullock, as well as work alongside Detective Isabella Hallows, and trek the globe, taking down every last remnant of the Network. Even if there are no follow-up stories, this is a fitting send-off and a new status quo for Gordon. It’s a shake-up that makes him feel like a living, breathing character who has his own shortcomings and struggles.

Jim has often been an overlooked character in Gotham, and this series, like a few others in recent history, prove that he’s arguably one of the more interesting residents of Gotham City.

Giuseppe Camuncoli gives this series a fitting end in the art department, playing to the moodiness of Gordon’s long narrations by leaning into that noir-inspired aesthetic. While this issue has the least amount of action of any in the series, Camuncoli does a great job of maintaining the exceptional atmosphere that has made this series one of the better ones at DC Comics these past few months.

Having said that, the only plot twist in this finale that doesn’t make much sense is the James Gordon Jr. reveal. It comes across as tacked on, and it serves no real purpose to the overall narrative. It’s best to ignore that little detail.

Synopsis: As the backup for The Joker #15 begins at Port Adams, the Royal Flush Gang Headquarters, Bluebird attacks a newly freed Punchline. Punchline taunts Bluebird, then rips out Harper’s nose ring. This provokes Bluebird into mercilessly beating down Punchline, who just allows it to happen.

Punchline then asks Bluff if he got all of the assault. Bluff steps out of the shadows with a phone in hand. He’s been recording this whole assault and has streamed it for all to see. Bluebird uses magnetic implants to destroy Bluff’s phone, but it’s too late. Punchline’s fans see what has happened and are already defending her online.

This storyline will continue in Punchline: The Gotham Game #1 in the fall.

Analysis: The art and colors by Sweeney Boo are absolutely stunning. The paneling is zany and fun as well. However, this backup story has suffered since it first began over a dozen issues ago. Nothing has been resolved. Punchline is free. Bluebird failed to lock Alexis Kaye away, and worst of all, this series ends on a setup for another title coming in the fall.

This Punchline backup has long ridden on the coattails of The Joker title without offering up any reason for being. Nothing changes in this finale found in The Joker #15.

The Joker #15 wraps everything up in a neat bow, and in the process, provides a fitting end to Jim Gordon’s hard-boiled detective narrative.