Review: The Joker: The Man Who Stopped Laughing #1 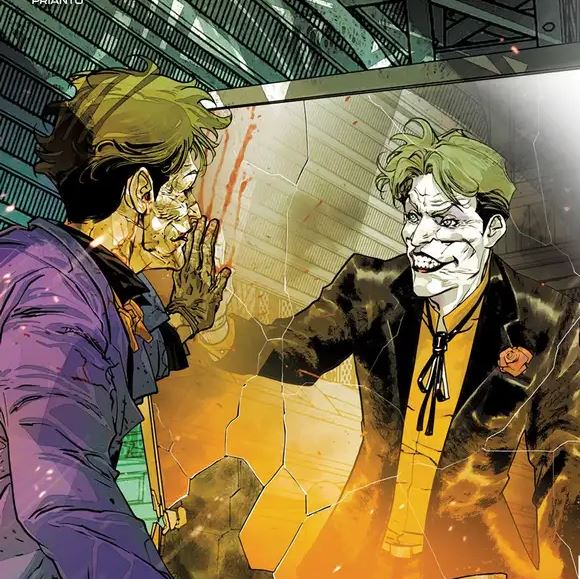 Overview: In The Joker: The Man Who Stopped Laughing #1, the reign of the Crown Prince of Crime has just begun in the City of Angels. However, he’s not the only villain with plans.

Synopsis (spoilers ahead): The Joker: The Man Who Stopped Laughing #1 begins in Gotham City four days ago. Three men sit inside an otherwise empty restaurant, food and drinks on the table in front of them.

While recounting a story to his two companions, a man suddenly stops eating his soup, staring at it in horror. An ear and other less recognizable body parts reveal themselves at the bottom of the bowl, which is flung across the table in disgust.

Storming into the kitchen to confront the chef, the three men are shocked to find the kitchen full of men in clown costumes, led by the Joker.

Gotham City, two days ago. A row of people, low-level crime and mob bosses sit, their faces covered by bags, tied to chairs as the Joker monologues about the lack of finesse, the lack of standard in crime. It’s become…inelegant.

Joker is back to clean up the crime in the city and return it to its former glory. His audience, Two-Face, Black Mask, and Riddler, stand before him, unimpressed by his declaration and unfazed by his insanity. The world is changing, and now Joker is old news. Even Harley Quinn has moved on to bigger and better things.

Between the group of current villains and the Joker, a brief standoff takes place. Its conclusion results in Joker deciding that it is time for him to also move on to bigger and better things…and places.

Joker turns to walk away, not before shooting one of his captives in the head. Multiple times. The man falls to the floor, limp and unmoving.

Gotham City, present day. In the cold snow, two hired men bury the bodies of those killed days ago by the Joker. As they move to dump their final corpse–the body of the man shot in the head by the Joker just two days previous– they startle in shock when the man coughs, noticeably alive.

They try removing the bag from his face, but they can’t rip it off. They try finishing the job but don’t have a chance before the supposed corpse bashes both the hired men’s heads in with a brick.

In Los Angeles, present day, Joker sits before Mr. Gregorich, a high city official, pitching his case to set up shop in the City of Angels. Mr. Gregorich unequivocally opposes the notion but is overruled by the Joker, throwing him out of his office window, several stories high. Joker didn’t come to receive Gregorich’s permission; he came for his territory. And his nice office.

Walking through the streets of Gotham, the man, once shot in the head but still alive, ponders over the fact that he always believed someone would stop the Joker. He was sure the plans would fail. But nobody is going to stop the Joker; they never do. Now it’s his responsibility.

In L.A., Joker sits in front of a camera, broadcasting through every cable line and TV. Joker announces that he once did great things in Gotham and brought humor and joy to the city’s people. It’s unjust that the rest of the country never got to experience it, and now he will clean up the country once and for all. Everyone needs to learn how to laugh again, and it’s time to bring about a new era, a funnier era. As he speaks, his hired men wreak havoc throughout the streets, killing as they please.

In a nondescript bar, whose patrons are observing the current broadcast, the door opens, and the man walks in, a bag on his head– a man who, for all intents and purposes, should have been shot dead by the Joker days ago. He stumbles into the bathroom and, after killing a man who tried stabbing him because of the ruined privacy, turns to the mirror and cuts the bag off his face.

Exiting the bathroom, he demands to know who a guy needs to kill to get a drink. Jerking back in shock, the people around the bar stare in horror at the man; his face is that of the Joker’s and looks just like the man being broadcasted on TV.

Analysis: The Joker: The Man Who Stopped Laughing #1 presents another tale of one of DC Comics’ most infamous villains, composed by Mathew Rosenberg and illustrated and colored by Carmine Di Giandomenico and Arif Prianto. The Joker is back, inspired and intent on bringing to the world (but the U.S. to start) a fun, invigorating time which realistically means an era of laughter brought about by hysteria, tears stemming from fear, and insanity from chaos.

The issue is narrated by the man who was shot by the Joker, only to be later revealed as another Joker (questionable) who is very much alive and just as crazy. I enjoyed the narrative throughout the story, which was just shady enough to keep me from guessing whose thoughts we were reading until close to the end. In addition, it is nice to see familiar characters in a new, somewhat unfamiliar setting, such as L.A.

The character and M.O. of the Joker so far is one any DC Comics reader is familiar with, the only change being that instead of the gloomy streets of Gotham, his reign begins in L.A., California, where the price of gas is trying to compete with most employees’ starting wages, and the weather regularly stays within the cool high-70’s, so everyone pays taxes for it.

While the series is bound to draw readers just by virtue of the leading character, I am very interested to see if the creative team will be able to deliver a story that’s original and new enough, one we haven’t seen before. There are countless stories and issues centering around the Joker at this point in comic book history, which provides a breadth of content to pull from but also stands as a hurdle to beat in terms of originality.

The Joker: The Man Who Stopped Laughing #1

Ultimately, I want to be entertained with a story that I don’t feel is a repeat. At some point, a change within the character might need to take place to give way to other plot developments and story ideas. However, the entire ethos of the Joker is comprised of a total lack of charity for anything in the world and the desire for twisted, perverted comedy. I think he’s pretty much as manic as possible, so by introducing two Joker characters, the story might be able to develop in a way that would be otherwise unnatural with just The Joker. Let's keep reading to find out.