Review: The Joker: The Man Who Stopped Laughing #2 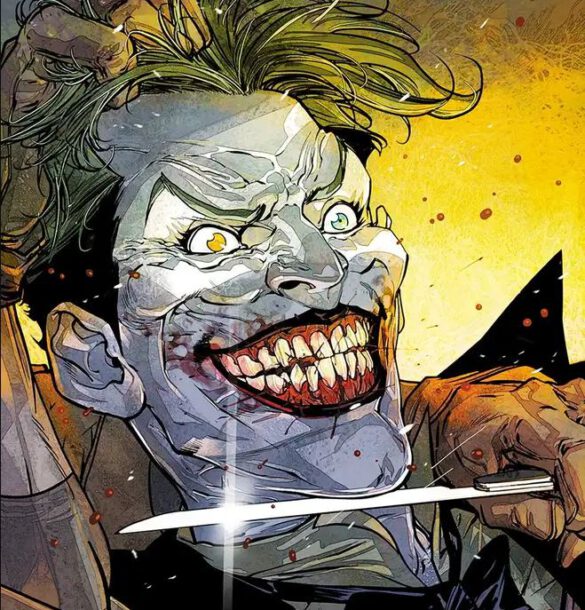 Overview: The mystery of the real Joker’s whereabouts intensifies in The Joker: The Man Who Stopped Laughing #2 as multiple Jokers materialize and Red Hood joins the case to find the Joker.

Synopsis: As The Joker: The Man Who Stopped Laughing #2 begins, a couple goes for a sleeping man with his head covered in a hood on the subway.  It is 10:06 pm.  One of the boys goes for the sleeping stranger’s pocket to remove a couple of bills.  The sleeping stranger, however, is not asleep.  He grabs the boy’s arm, but the train stops allowing the boy to free himself.  He and his buddy run out of the train with some bystanders in pursuit.

Earlier in the evening, a man frantically tries to clean the blood from his bathroom floor.  He is interrupted by another stranger, Jason Todd.  He asks the guy about the victim being the Joker.  The guy corrects Todd and tells him that the man looked like the Joker.  The real Joker, after all, is in California.  The guy thinks that Jason is a cop, but he is not.

At 10:26, a strange man with his head covered and white hands tries to enter a building, but it appears to be locked.  A man loitering nearby tells the stranger that the building has a new owner.  A couple of other guys wander in, and the three of them think they are looking at the Joker.  One pulls a gun. This starts a fight which results in the stranger getting the gun and pointing it at the original man, who is now fleeing.  The stranger tells the man to tell his boss not to look for him and kills the other two men with the gun.

At 10:32, Detectives MacDonald and Driver arrive at a crime scene.  They were called in by a patrolman.  The pickpockets front the beginning of the book were being chased by the cop.  The woman pickpocket tells the cop they tried to steal from the Joker.  This is what brought the detectives to the scene.  This is interrupted by a shooting call with multiple casualties.

It is now 11:19, and a man arrives at a dark home but also something else.  He finds that his former boss, the Joker, is sitting waiting for him.  He grabs the man’s fast food and starts to eat.  Joker learns that the rest of the gang deserted after the Joker’s lengthy absence.  In addition, the other families led by Penguin, Black Mask, Riddler, and Two-Face went on the attack to gain Joker’s territory.  Some of the Joker’s henchmen joined the other gangs, and others were killed.

The scene shifts to Taos at 9:21 pm.  Another Joker is talking to his gang.  They are lying low. The henchman is telling this Joker about the other Joker that killed a guy in a bar.  This Joker had tried to kill him, but apparently, he was unsuccessful.  Joker kills the unlucky henchman.

The scene shifts to the wounded Joker.  He goes to change his clothes.  At 11:23, Red Hood starts his investigation.  We find the man who escaped the Joker talking to his buddies about his experience.  He is interrupted by Red Hood, who questions the men in his own way with violence. He beats the information that he was looking for a guy named Cardiff out of him.

At 1:36 AM, Joker pays a visit to Harley Quinn.  She is so “excited” to see him that she hits him in the head with a baseball bat and ties him to a chair.  After talking to this man, she comes to the conclusion that this is not the real Joker. She lets him go and gives him some tea.

Red Hood continues his violent investigation looking for the Joker.  His investigation leads to this poor sap, and he attacks this guy thinking he is the real Joker.

Analysis: This story is so confusing.  I am having a hard time following what is happening.  Part of the confusion is that I really have no love for the Joker character, and this story seems to have three.  The Joker in California and two others in Gotham.  One may not even be a Joker, especially if you ask Harley.

The art is passable.  It is dark and gritty enough to match the overall tone of this story.  It is unclear to me if it is in continuity, but the character design of Red Hood does match the current costume design of Red Hood.  The violence is very detailed in this story, including the head trauma of the “Joker” that visits Cardiff and Harley.

Story #2: “Jokers Die Many Times Before Their Deaths” by writer Matthew Rosenberg and artist Francesco Francavilla

Synopsis: As the backup in The Joker: The Man Who Stopped Laughing #2 begins, baseball player Joker is about to be run over by the Batmobile.  The Batmobile runs over the Joker, knocking him in the air and onto the asphalt.  His goons help him up, but the Scarecrow and Catwoman, who are also there, are laughing at him.  One goon tells Joker that it was funny, and he gets a bullet in the face for his comment.

The next day, Joker invites Two-Face and Catwoman to his home.  Once they enter, they find that Joker hung himself.  A few days later, all of Joker’s friends gather for his funeral.  The Joker, who is very much alive, is backstage listening to all of his friends’ words.  Finally, Poison Ivy gets up and says that she loved him.  This prompts Joker to reveal himself.  Initially, the villains all think that this is an impostor.  Joker tries to convince the fiends that it is really him.  Instead, they attack him.  In the midst of the fight, they discover that the coffin is empty, showing everyone that it was really a joke, and everyone laughs over a beat-up Joker.

Analysis: This is a cute little story.  There is no explanation as to why the Batmobile ran over the Joker.  What reality shows all the Batman villains as happy friends? Just as the story is cute, I can only describe the art as cute as well.

The Joker: The Man Who Stopped Laughing #2