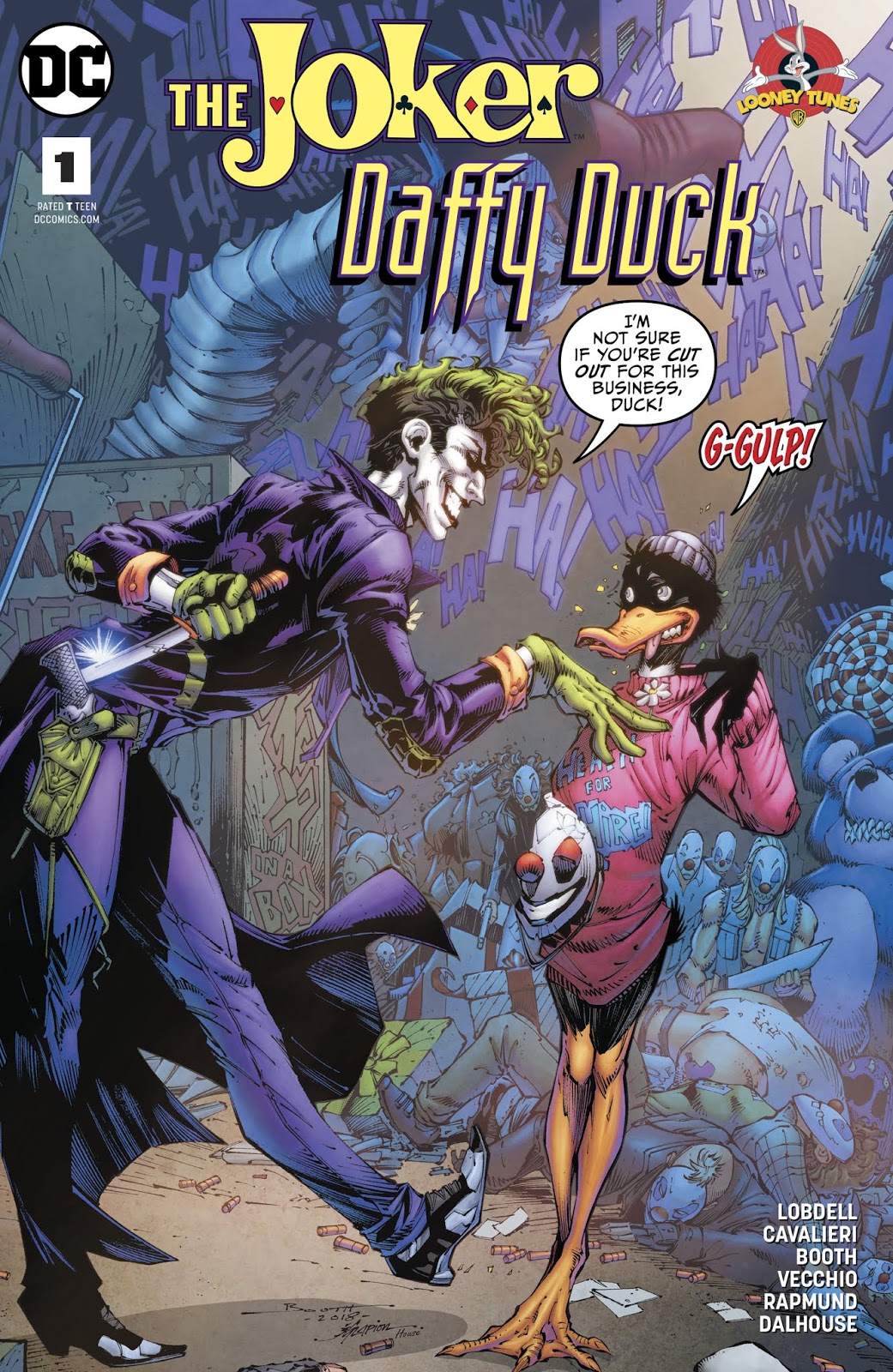 Synopsis (spoilers ahead): In the main story by writer Scott Lobdell with art by Brett Booth, the story opens with the Joker on stage at a comedy club, where he’s performing to a room full of smiling corpses while his henchmen play a laugh track on a stereo.  Joker makes a quick exit as Batman arrives on the scene.

Meanwhile, Daffy Duck is on the phone with the Acme Electronics Automated System and becomes more and more frustrated until he decides to head to the Acme home office in Gotham City to give them a piece of his mind.  Daffy finds the Acme warehouse abandoned, only to find that the Joker has set up shop and is in the middle of beating a henchman to death.  Daffy is discovered and avoids being murdered by claiming to be from a henchmen temp agency and is welcomed into the Joker’s gang.

Daffy becomes the Joker’s number one henchman, whipping the other goons into shape and redecorating the Joker’s hideout but is then horrified when he finds the Joker’s latest plans for mass murder.  The Joker tries to gas a crowd of partygoers, only to find that his Joker gas has been replaced with sneezing gas, and as the Joker tries to make his getaway, the wheels to his van fly off, with Daffy having removed all the lug nuts and Batman quickly takes the Joker down.

Daffy hides from the police and Batman in a carnival booth full of stuffed animals ala “ET” when he is provoked into a rage by Batman when he overhears him talk about how weak-willed ducks are.  The story ends with both the Joker and Daffy Duck committed to Arkham Asylum.

In the backup story by writer Joey Cavalieri with art by Luciano Vecchio, despite being locked up in Arkham, the Joker has kidnapped the head of the Acme corporation and with the clock ticking until he dies, the Joker continues to drive insane every psychiatrist who attempts to find out where the Joker has stashed his victim.  Commissioner Gordon and Detective Harvey Bullock light the “duck-signal” and summon the preeminent psychiatrist, Doc-tor Daffy Duck.  Daffy meets with the Joker at Arkham, with the Joker quickly turning the tables on Daffy, explaining that he runs Arkham Asylum.  Just as the Joker and the other inmates surround Daffy, he is saved by a tour bus which crashes through the wall, because as it turns out, Arkham Asylum is on the Warner Bros Studio Tour.

Analysis: After the success of last years DC/Looney Tunes event, it’s no surprise that another round of these crossovers has been produced for this August event where DC has an additional week that they need to fill with content.  I like the idea of not disrupting the ongoing books with some meaningless company-wide event and just producing interesting content for the extra week that we wouldn’t get otherwise, so the idea of more meetings between the Looney Tunes characters with the DC Universe is a welcome one.  As an idea, pairing the Joker with Daffy Duck feels natural.

The book keeps the general structure of the previous crossover, with the main story set in the DC Universe while the backup story is decidedly sillier and more cartoony or at least I think that was the original intent.  The main story starts off as your standard Joker story, but the moment that Daffy Duck shows up, the story skews very much into the cartoony.  And it’s a tone that I find myself a bit conflicted on.  On one hand, I like that there’s no explanation why a talking duck with a speech impediment shows up in Gotham.  It reminds me of one of my favorite running gags in Hellboy that I wish the movies would play with, where the public is running and screaming from monsters but no one bats an eye when a seven-foot demon with a stone hand shows up to deal with the problem. I liked seeing Daffy Duck interact with the Joker.  The problem is that in having fully formed Daffy Duck show up with no explanation, is that it drags the story into parody to the point that it becomes just a series of no reason gags and makes the backup story set in the “cartoon” world feels unnecessary. There’s no real plot here.  It’s just a bunch of stuff that happens.

I have to admit that its kind of silly to be looking for depth from a Daffy Duck/Joker crossover and I think the majority of my problem has more to do that I can help but compare this issue with Tom King and Lee Weeks’ Batman/Elmer Fudd crossover, which was one of my favorite comics from last year. That really isn’t fair to compare it to this story, which is a lot like comparing apples and … cartoon ducks.  Still, I can’t help but wonder if this story would have worked better if Daffy had been reimagined to fit more into the world of Batman then what is presented here.

Brett Booth’s art style works fine for the most part and I’ve always enjoyed his art.   I like his take on the Joker and it was nice to get an appearance of the “New 52” Batsuit in this issue.  I did find that his Daffy Duck, in trying to match his appearance with the world around him, to be a tad grotesque.  I can’t help but wonder if the book would have better served to go a bit more cartoony in the art style.

The back up is amusing and definitely leans into the world of the Looney Toons and Vecchio’s cartoony art style is a good fit for the story.

Final Thoughts: This was a fun read, if a little forgettable, which is where I think the bar usually is set for crossovers like this.  While I think a bit more care would have resulted in a stronger story, once again, this a comic book about a homicidal clown meeting a cartoon duck. So I’m also just kind of glad that this is a thing that exists.