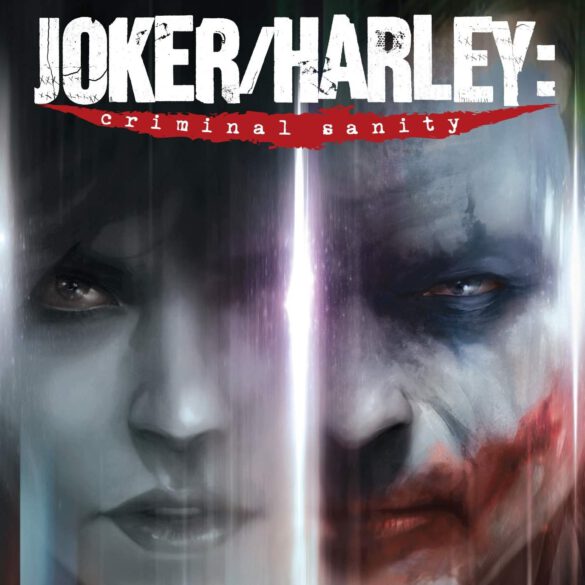 Overview: In Joker/Harley: Criminal Sanity, the quest to avenge her murdered friend leads Dr. Harleen Quinzel down a dangerous road that leads to the Joker.

Editor’s Note: This collected edition includes all eight issues of the limited series Joker/Harley: Criminal Sanity that had its first issue released in October 2019 with the final issue releasing in April 2021. This review focuses on the story as a whole rather than the individual issues that made up the limited series.

Synopsis (spoilers ahead):  Joker/Harley: Criminal Sanity begins with Dr. Harleen Quinzel working as a lecturer at Gotham University as well as a consultant for the GCPD by helping them profile dangerous criminals, after the death of her roommate and closest friend Edie five years ago.  She’s motivated to find Edie’s killer, the mysterious criminal known only as the “Joker,” whose signature is using a coat hanger to affix a smile on his victims’ faces.  When an inventive serial killer starts committing gruesome murders across Gotham, Harleen finds herself professionally interested and under pressure to find him.  This killer considers himself an artist who is determined to recreate and reinterpret classical works of art in the most twisted and evil ways possible.

Interspersed with the present-day narrative are flashbacks of Harleen’s youth as well as flashbacks from the turbulent childhood of John Kelly (who is the Joker in present).  While the cat-and-mouse chase continues, the flashbacks show that John Kelly started his murderous spree with his abusive father and continued to kill other abusive parents in his neighborhood.  As Harleen closes in on this new serial killer, John decides to pay a visit to her apartment where he has a conversation with her after he reads her profile and notes on him.  Following this incident, Harleen goes through old case research and discovers that the Joker and this new killer are the same person; just with a new modus operandi.

As the Joker continues to commit more inventive and audacious murders, he becomes more daring and lets himself be captured in a compromising but circumstantial situation, so that he can have another one-on-one with Harleen.  They discuss Edie’s murder and Harleen’s focus shifts from wanting to catch Joker to wanting to kill him.  She lies to the GCPD about Joker not being the serial killer suspect they are looking for, rationalizing to herself that he would only escape from jail and she wouldn’t be able to kill him if he’s behind bars.  The Joker targets a massive concert for his “masterpiece,” and Commissioner Gordon figures out that the Joker is the killer they’re looking for.  As all hell breaks loose at the concert, Harleen pursues Joker in a motorcycle chase around Gotham.  They fight, Joker is taken into custody by Gordon, and Harleen gains a new perspective on who she must become.

Analysis: When Joker/Harley: Criminal Sanity was announced, one of the aspects that most excited me about the story was the promise that it would offer a serious take on the psychological dimension of the characters, and the book delivers in that regard.  Kami Garcia’s Harleen isn’t some wide-eyed intern who makes questionable decisions, but rather a brilliant professor and consultant with the swagger and bravado to match.  The stakes are also personal for this version of Harleen as the Joker murdered her best friend and roommate.  Harleen’s expertise in the mentality of criminals means that her reports and dialogue are a vehicle for Garcia to deliver this information to the reader.  It is very clear that there was a lot of research that went into these reports, and fans who want to see a story more grounded in criminology will no doubt appreciate that.

The book opens with graphic crime scenes and descriptions right out of the gate, leaving no doubt that this story is for mature readers.  While I personally thought Harleen’s lecture was a nice touch, I would have liked to see it connect to the story a bit more.  The use of flashbacks for both Harleen and John Kelly were interesting in that there are some parallels between the two with regard to childhood trauma.  I thought the creative choice of using color for the flashbacks and black and white for the present day was an interesting one.  I eventually settled on a possible interpretation for this choice, although I am not entirely sure it is correct.  Harleen’s present being black and white could represent all joy leaving her life after the murder of her roommate and the singular focus that resulted from that.  The Joker in the story fancies himself as an artist, so his scenes in the past and present are often in color when he’s creating his “art” or undergoing trauma that creates what he calls his true face.  Perhaps it is none of these reasons, but it is something to think about.

The art, in my opinion, is quite beautiful.  I understand people claim that the photorealistic art style makes comics more static and takes away the kinetic energy that makes the action so explosive, but I never got that sense here.  Instead, I felt like the realism added to the sense of horror that was appropriate for the story.  If anything, it feels closer to the iconic Alex Ross art in Kingdom Come.  A lot of the story is in black and white and the use of light, shadow, and texture are all done quite expertly.  I also think it is notable that Mico Suayan has gone through some incredible adversity on a personal level recently, and for him to turn in this level of work despite all that is remarkable.  Of course, with art like this, the lettering is also important.  I didn’t find any errors, the text boxes were all placed in a way that led the eye and didn’t obscure the art, and all fonts were easily legible.

With all that said, this book really struggles in the third act.  The second act is a little repetitive in that it gets locked into a cycle of Joker committing murders and Harleen and the GCPD arriving too late, but that could all have been described as building tension if the third act had any payoff.  The story introduces these characters and sets the pieces on the board but then ultimately fails to do anything with them.  The Joker gets taken into custody, and Harleen simply walks away at the end and says she’s going to become a vigilante who has no qualms about killing.  It’s a little disappointing, and there’s no follow-up on exploring the interest Joker and Harleen seem to have in each other’s abilities earlier in the story.  With an “Elseworlds” style story like this, I typically look for some new commentary of the characters or a twist on the traditional story.  I’m not sure this story has much to say.  The Joker is given a back story that could work, but his later crimes are him simply carrying out personal vendettas, which is a lot less terrifying than the incomprehensible force of evil and chaos he is usually depicted as.  The conclusion Harleen arrives at in the end about who she has to become mostly had me scratching my head and saying, “ok…and?”.  The special Secret Files issue was well put together but unfortunately, most of the information already appears in other issues to the point where it is copied and pasted.  Batman’s absence from this story also feels like a missed opportunity to compare and contrast the characters against each other.  I don’t think he needs to be a huge presence, but having zero presence in the story just felt like there was a gap.

Editor’s Note: DC Comics provided TBU with copies of the original issues of this series as they released, but not of this new edition. You can find this collected edition and help support TBU in the process by purchasing this edition digitally either through Comixology or Amazon, or as a physical copy in a hardcover form at Amazon.

This is a book with some great art and very meticulously researched criminology references and elements, but ultimately the story fails to do anything with the characters and the plot doesn’t really go anywhere.