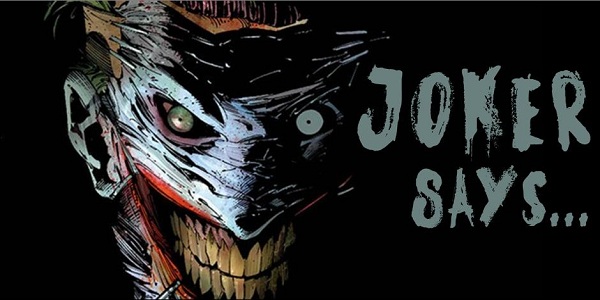 Editor’s Note: The following article is a new segment for The Batman Universe. It is meant to be a take on how the Joker would react to the real world outside of the DC Universe and current events. The article is also darker because it is in fact coming from the perspective of one of the darkest characters in The Batman Universe. Viewer discretion is advised.

Greeting Bat-babies, it’s you dear old Uncle Joker here. So you are probably wondering what on earth I am doing here. Well I’ve been asked by my dear dear friend Dustin, after a little persuading; too give you a monthly article on whatever takes my fancy. So here I am. Of course we all know I can’t be bothered to actually write it so I holding Jon captive and making him write it. Aren’t I Jon?

Yeah. Well it’s a talk type set up so it will pick up….

Oh for god sake. Delete it all th… Oh don’t bother. I don’t care what those TBU girls think. Have you heard that podcast? Whinge, moan, grumble, bitch, moan, whinge. Oh where is Cassandra Cain? That’s not my Batgirl. Bla bla bla. I turned up at Stella’s house do to this. It’s a lot closer to my hide out. Five seconds of having to listen to her go on about Batgirl drove me insane. And I am insane! So I came to see my dear dear friend jonny boy. Hee hee hee hee ahahahahahahaha!

Don’t worry though Joker fans I will still scheme to kill Basty boo, naturally. I think I am doing rather well on that score don’t you? Robin having to kill his daddy. I wonder if he will do it? Red Robin enjoying my fun fun theme park. I hope he likes the tea cups…there dead fun hee hee hee ahahahahahahahahahaha! Bat-girl…

Oh don’t we make a lovely couple. The clown and the cripple! Oh wait that’s not true anymore. Such a shame, my greatest triumph wiped out by me. Oh yes Bat boys and girls! That’s right want to know who rebooted your universe? It was me! Well what did you think I had been doing after Tony Daniel cut my face off. That’s right I’ve been impersonating Mike Marts.

Want to know why I did it? Because of Grant Morrison. He kills off Batsy then has the nerve to defy me and bring him back and NOT ONLY THAT HE MAKES ME A GOOD GUY! A GOOD GUY! ME! It is insane and I should know. So what did I do that’s right I wiped out everything he had ever written that will teach him. And it did ahahahahahahahaha hope you enjoy Marvel G!

But I don’t think I am done messing about just yet. I think Scott Lobdell needs to run the timeline. Total control of everything! Yes that seems to be a very clever move to me. What about old Gail Simone? You didn’t think I would let her escape did you? No no Simoney is not going anywhere. Not when we have so much more fun to do with the character. Let’s make her a brunette for a start. No, I want my dear friend Simmy right here where I can keep a beady eye on her. Maybe she and Devin Grayson could plot everything. That would be great! Jim Balant could draw it. I have never been sure if a woman’s spine could do that. Let’s try. HARLEY GET IN HERE!

Harley, darling, could you come here and strike this pose?

No, no, no Harley you’re not doing it right. Come here let me just….

Anyway where was I? Oh yes I know what else I need to do. I think I’m going to give Rob Liefeld…Batman. No one likes Synder anyway. With his long, boring, never ending storylines. Everyone likes Liedy. Who doesn’t! With his inability to draw feet. Feet! I can draw feet’ I’m drawing feet right now! And his little T-rex arm all his characters look like tiny little dinosaurs. Shiny dinosaurs.

Just imagine with these changes, soon no one will be reading Batman at all. He and his friends will be crippled. Literally! And then I will rule the world. Just think 24/7 Joker who wouldn’t want that!

Well that’s all from me this month bat-babies. Don’t worry though your dear friend Joker will be back next month. I wonder what will happen next….HARLEY! HARLEY! Oh there you are. Where are my joker fish?