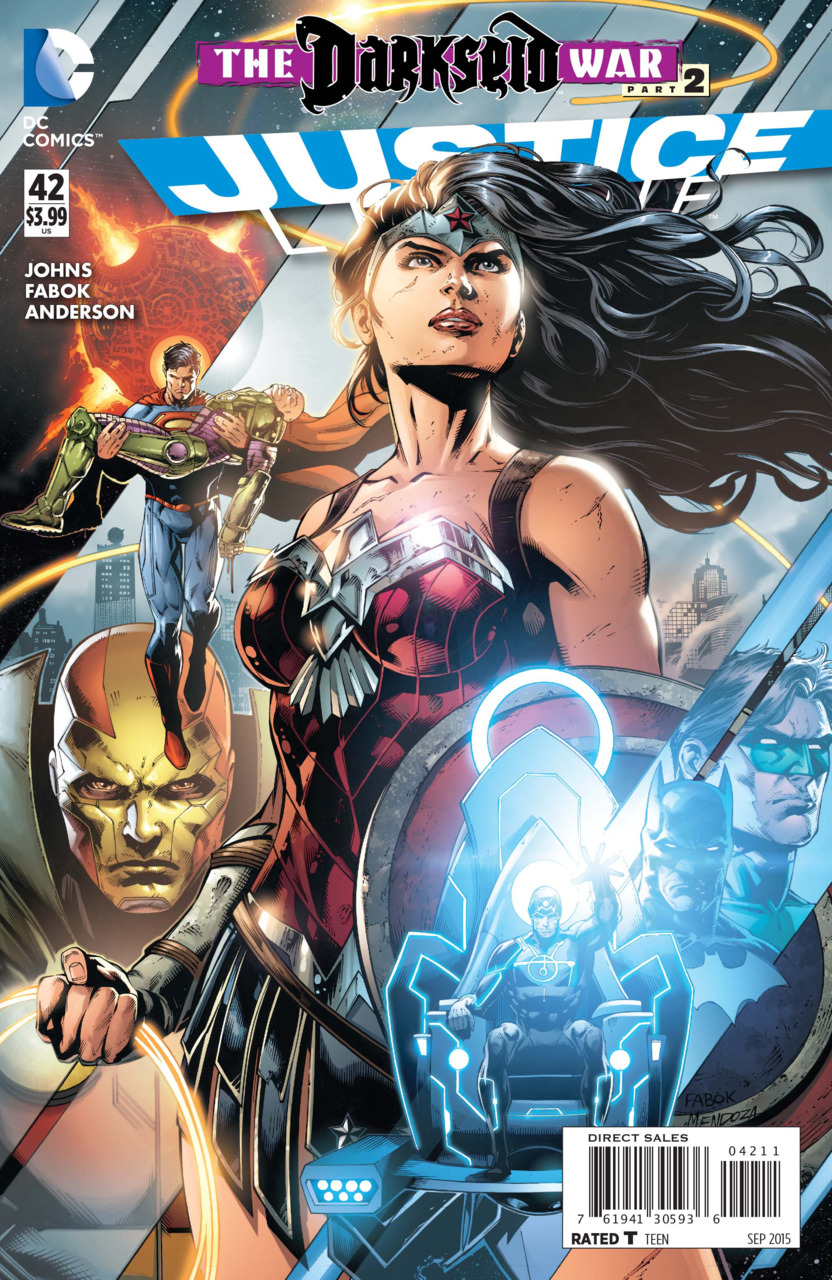 Picking up where the previous issue left off, Superman and Lex Luthor find themselves on Apokolips as Supes uses his heat vision stop Luthor from bleeding out from his gunshot wound. Cutting to the stronghold of Darkseid, the God of Evil discusses with Steppenwolf and Desaad about Superman’s arrival and orders his troops to hunt him down.

Back on Earth, the Anti-Monitor appears in the sky above the remaining members of the Justice League. Unsheathing her sword, Diana rushes into battle against the evil Amazon Grail but is knocked into the air by the Anti-Monitor. A boom tube suddenly opens and Metron appears. After some quick banter between Metron and the villains, he booms away with the Justice League to safety.

As we cut to Athens, Myrina Black introduces herself to Mister Miracle and they discuss her role and how she instigated a war between Darkseid and the Anti-Monitor in order to destroy the former. Realizing that the woman is clearly insane, Miracle attempts to escape but is attacked by Myrina…however he successfully opens a Boom Tube and gets away.

Arriving on the Rock of Eternity, Metron explains how this particular location will keep them hidden…at least for the time being. Realizing who their savior is, Hal Jordan attempts to tell the League how Metron was involved in war with the New Gods against Oa…however, Metron explains that he was only there to observe. Wanting some answers, Wonder Woman wraps Metron within her Lasso of Truth and demands just that. Metron mutters that to know the truth, one must take the chair from him. Pulling the New God from his dais, the chair seems ready to explode as Metron shouts that it can’t be tamed. Rushing to save them, Batman grabs the chair and is enveloped in a bright light…seeing several events across the universe, Batman states that he sees “the answers.” With his eyes glowing brightly, Batman asks who killed his parents…a brief ‘ping’ and he acknowledges that Joe Chill killed them. He then asks for the Joker’s real name and seems shocked at the answer. Wondering if their ally is okay, Batman states he is fine…he is a God now.

WOW. Although this was basically an information issue, this was quite the story nonetheless. After briefly catching up with our various characters, we realize that the Anti-Monitor has arrived on Earth…and his display of power is truly something to behold. Easily knocking aside Wonder Woman, it will be quite interesting to see how the Justice League will be able to combat against this powerful force. Maybe the League will be forced into allying themselves with Darkseid? Or maybe they break Superwoman out of jail to help…she was shown in Batman’s vision after coming into contact with the Mobius Chair.

Well I guess the big thing is that Batman is now apparently a New God. What does this mean for the Caped Crusader? With access to all of the answers, how will the Dark Knight be able to come back from this apparent ascension to godhood? Will he want to? It was also interesting to note that he seemed shocked at the identity of who the Joker was…I’m really curious as to who that might have been, was it someone he knew from his past? Maybe a friend or foe that he used to know? Or maybe he’s just shocked because the Joker was a nobody and Batman can’t fathom his greatest nemesis coming seemingly from nothing….or maybe he sees that Joker really is immortal?! Just kidding. No matter the answer, I don’t think that we will get any resolution…and who knows if Batman will retain any of this knowledge if he gives up the Chair.

Ultimately it will be quite interesting to see how “Darkseid War” plays out and how our various characters will come together to not only battle against the God of Evil, but the Destroyer of Worlds.