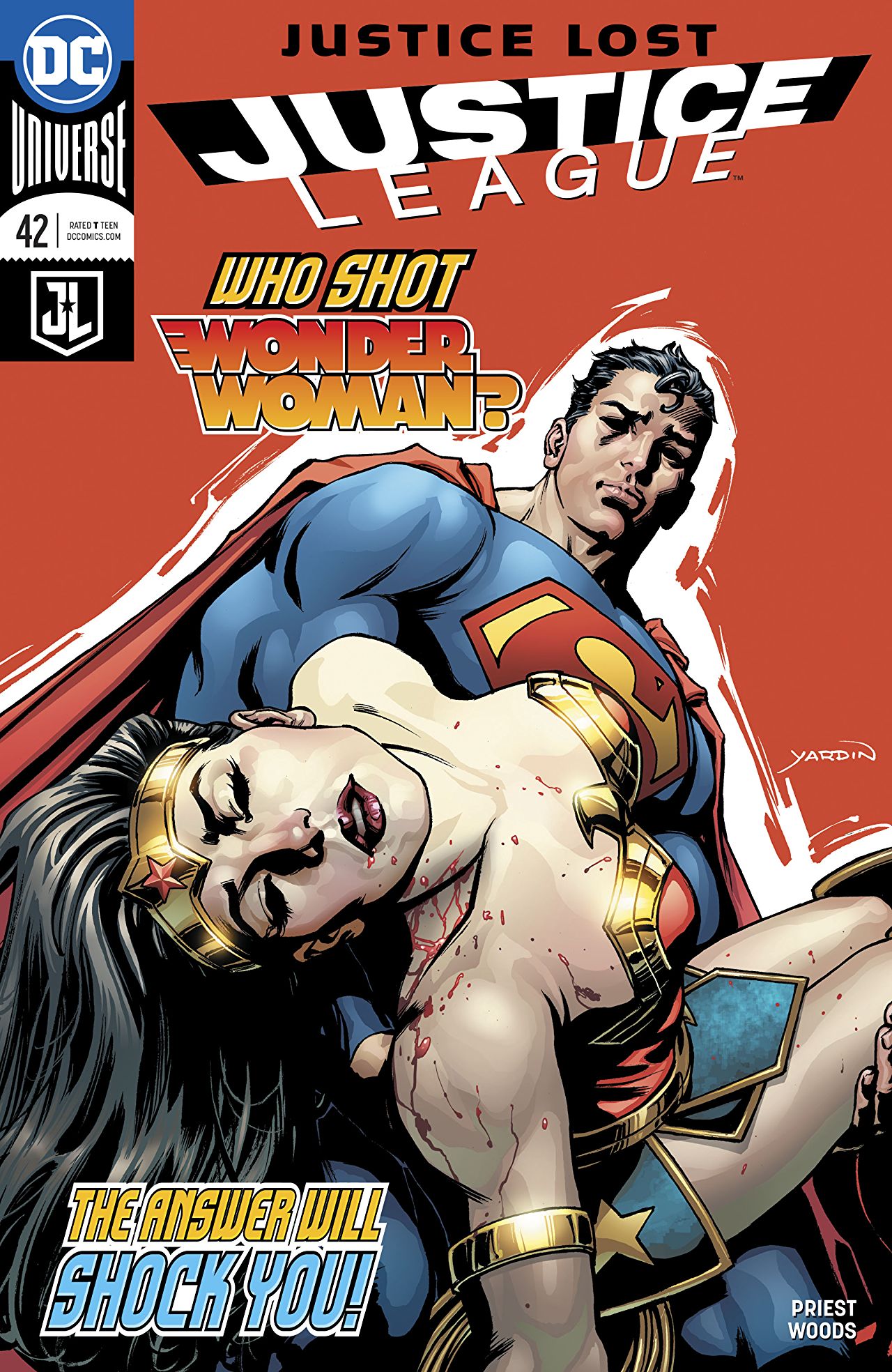 Synopsis (spoilers ahead): As Jessica Cruz and Simon Baz speed towards Earth after helping Martian Manhunter, Simon continues his shock at Jessica’s revelation that she kissed Batman. The discussion is cut short, however, when they realize that the Watchtower is gone from orbit.

Wonder Woman, her throat hit by a fragment of a bullet deflected off of Superman after being fired by one of the African children caught up in the tribal struggle caused by the Watchtower’s descent, remembers her life on Themyscira. She orders Superman to cauterize the wound, and he flies her off. However, Flash tells him to go back and save the refugees while he takes Diana for help.

In the Red Lion’s palace, Cyborg finds himself in Deathstroke’s room. Slade Wilson analyzes the damage Red Lion did to Cyborg and tells him his leadership of the League has been a failure. He also reveals that the Red Lion’s plan was to annex the passage to the sea, securing the power his aircraft carrier (stolen in Deathstroke’s solo series, also written by Priest) can have over the region.

Wally West meets Barry Allen as both Flashes bring together the wounded Wonder Woman and magical Raven so that Diana’s wounds can be healed through Rachel’s magic.

After Deathstroke leaves, Cyborg agonizingly drags himself to the apple Slade left. The Green Lanterns find themselves in the middle of a war zone, and desperately try to stop the shooting.

Batman and Aquaman teleport to Cyborg’s location with their prisoner, the Fan. However, Victor appears to be dead, with Slade’s knife in his chest – but he opens his eyes just as they assume his decease. Red Lion explains his territory acquisition to the American government over a video call, but the call is cut short when Cyborg, Batman, and Aquaman walk in.

Having stopped the shooting, for now, the League falls into an argument about where they can intervene without the structure American or international law provides. While the disagreement grows more and more heated, Deathstroke decides to kill the Fan and heads off, grimly promising to solve the League’s problems his own way – with lead.

Analysis: Christopher Priest has thrown problem after problem at the League. Instead of focusing on the kinds of epic, metaphysical, cosmic problems at the World’s Finest Heros that we saw in Bryan Hitch’s run, or will see again with the incoming Scott Snyder run, he made the title a workplace drama, exploring the problems of a Justice League who has to deal with the optics of who they help and who they don’t. His main villain, the Fan, has been quite enjoyable – a tricky, amoral jerk who kills ostensibly to “protect” the reputation of his favorite heroes. Here, Priest also throws in the complex and darkly humorous characters of the Red Lion (his deliberately twisted take on Marvel’s Black Panther) and Deathstroke, the former manipulating the heroes for his terrible dictatorial ends, the latter just in it for the money. Seeing Slade “solve” the League’s problem by killing the Fan is a genuinely abrupt but also somewhat exhilarating moment – after Batman has spent the last nine issues trying to match wits with the Fan, Priest solves the problem brutally, using a villain. Considering the last time a major Justice League story focused on a character who started killing and knew too much about the League’s secret identities was, well, Identity Crisis, it’s nice to know that Priest has no desire for the League to go down the route of mind control to keep their secrets, even if Slade’s decision cuts short the real dilemma of all the people who know too much. Though some elements, particularly Jessica’s kissing Batman, are still out of character (even though Batman’s engagement is finally mentioned) and progressing at a glacial pace, the promised “Full-Auto Conclusion” in two weeks can’t come soon enough.

The main artist for this arc, Pete Woods, has returned after several issues of fill-in art, providing the welcome return of his blocky, appealing pencils, and bright but carefully chosen colors. This reviewer is still amazed that Woods was able to craft six of ten issues handling pencils, inks, and colors by himself. A bravura performance. Though this series of reviews haven’t really delved into the cover work, J. G. Jones deserves a shoutout for the stunning variant covers he’s provided, giving a painterly air to the series.

Though it won’t likely be as remembered as Snyder’s forthcoming run, Priest has created a tight, complicated story of the League facing problems spinning out of the everyday grind of saving the world from threats big and small. All of the characters show themselves to be heroic, committed to doing good, but limited despite their godlike powers. Though it’s sad that he only got five months on the title, this run will continue to provide pleasure to many rereads due to the attention to detail in both the art and writing.

Final Thoughts: Priest and Woods set up the conclusion to their ten-issue run with the question: is justice truly lost?