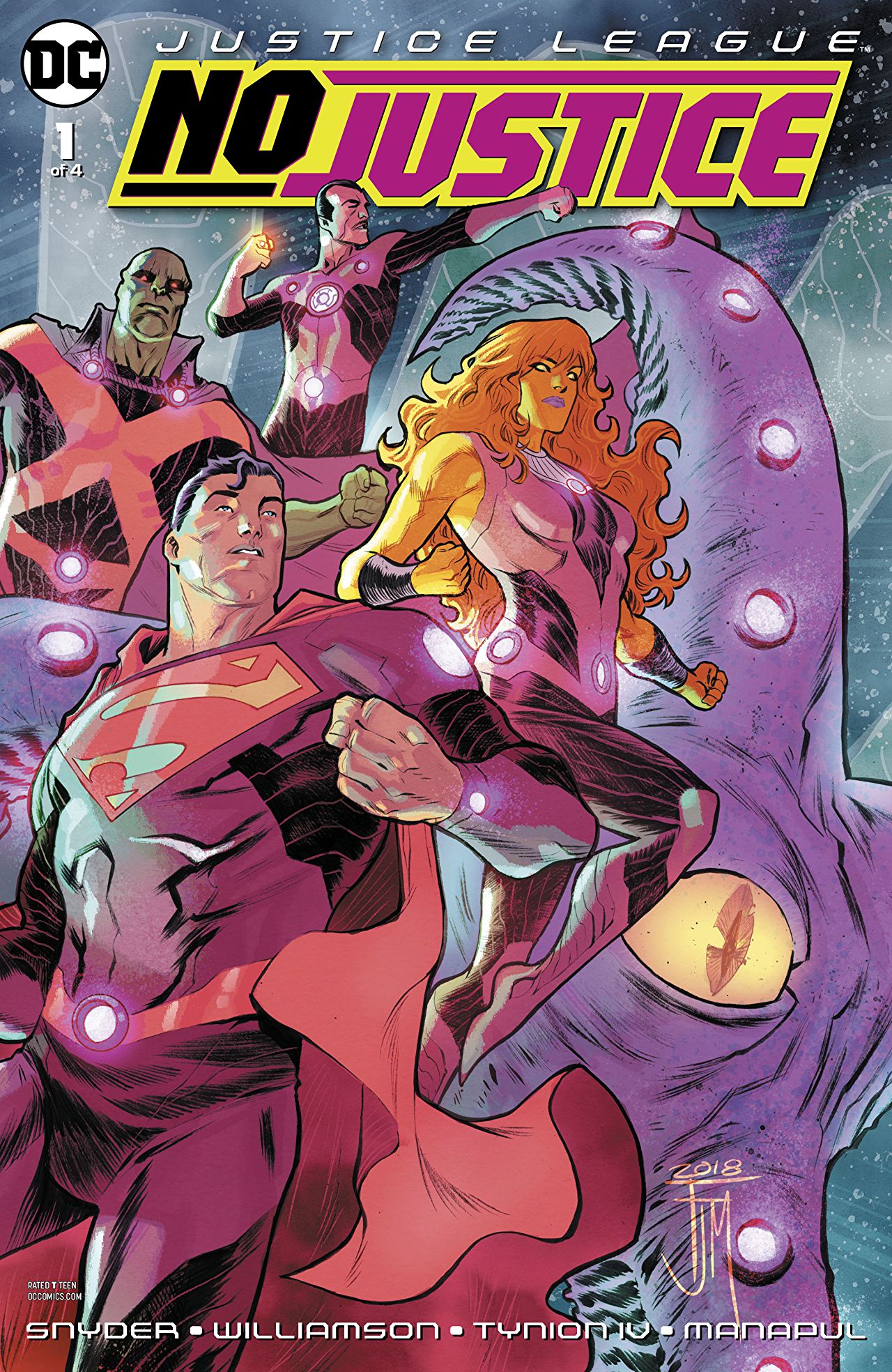 Overview: Four brothers decide to have an eating contest to prove which of them is better. Antics ensue.

Synopsis (spoilers ahead): At the edge of the universe Hal, Kyle, and Guy have joined the rest of the Green Lantern Corps at the Source Wall. A crack is leaking destructive energy that disintegrates anything that passes through. Guy informs Hal that because of that, there is no longer a rule book.

Back on Earth, the Suicide Squad, Titans, Teen Titans, and the Justice League are all being overwhelmed by Brainiac while Amanda Waller initiates a protocol to fight him off. Superman shows up and punches Brainiac through a building, informing him that Metropolis has protocols to evacuate the city in an instant, meaning he doesn’t have to pull his punches – so screw taxpayer’s money! (Haha) The Justice League break free from Brainiac’s grasp and Superman tells him that he can’t win. Brainiac grabs Superman by the head and shows him why he is there. Clark sees visions of how Brainiac could beat them using a mathematical formula, meaning that Brainiac isn’t there to kill them because he isn’t using the formula he showed Superman. The League assembles and are getting into formation when Brainiac drops his skull-shaped ship on top of them.

Beast Boy, Starfire, Zatanna, and Harley all wake up in a cell together with no memory as to how things ended. They unlock the door of their cell and let themselves out with ease. They all realize that they are in different costumes than they were previously. Elsewhere, a group consisting of Atom, Marian Manhunter, and Raven with Damian is about to fight Doctor Fate for wanting to change their course of action. Bruce appears and tells Damian to calm down. He is joined by Cyborg, Flash, Wonder Woman, Superman, and Brainiac – of which tells him that they are among allies. Many are skeptical, however, Diana’s lasso is wrapped around his hand.

Bruce tells Brainiac that he needs to catch the rest of the teams up to speed so they know what is going on. Brainiac tells them a story that Martian Manhunter is familiar with about four brothers who are cosmic goods called the Omega Titans. Each embodies a fundamental energy of sentient life; entropy, wisdom, wonder, and mystery. They would return later to see which element was dominant and the winning brother would consume the world and the universe would be destroyed to be used as compost to a new universe? (or at least that’s how I interpreted it.) Right now, they are attacking his homeworld of Colu and he’s going to need help from the Justice League to stop them. Brainiac has broken up and redistributed the teams into groups of his choosing, matching that of the Omega Titans. Batman notices that the teams are uneven, and Brainiac introduces the other members; Starro, Sinestro, Lobo, Deathstroke, Etrigan, and Lex Luthor.

Meanwhile, Amanda Waller is using a combination of Apokoliptian technology, Queen technology, and a number of psychic-powered people to hack into Brainiac’s brain.

Back on the ship, Luthor is asking Manhunter if he read Brainiac’s mind. J’onn admits that he prodded safely, and from what he could gather he’s telling the truth. However, J’onn is having a hard time reading Lex’s. Both acknowledge that things have changed since J’onn’s absence from Earth. J’onn fears that they won’t succeed on this mission and if they do, he fears of what they will become. Luthor agrees, and then threatens to burn J’onn alive if he attempts to read his mind again.

On the other side of the room, Starfire is having a hard time accepting Sinestro’s role on the team. Raven and Etrigan hit it off. And Bruce talks to his son, telling Damian that he doesn’t care what Brainiac says, his son won’t be leaving his side. Damian still believes this whole thing is a trap. After some more bickering and bonding amongst different members, Brainiac silences them, telling them that they have arrived at Colu. With his race being the most intelligent, Wisdom has come for them. To succeed they’ll need to follow his word to the letter because their world is in danger too. He planted a seed on Earth, and if they don’t succeed here, the Omega Titans will come to Earth next. Waller’s psychics begin straining against Brainiac, but she continues to push them. Brainiac collapses into Superman’s arms, and then his head explodes. The Omega Titan of Wisdom looks down at them and smiles.

Analysis: Scott Snyder, James Tynion IV, and Josh Williamson get off to a shaky start here. This book didn’t read like a Snyder story, and I wonder how much he actually had to do with this book. I feel like it’s more of an editorial/oversight role. Tynion probably plotted this out, which we have yet to see how that works together. I’m assuming Williamson at least did the dialogue and finishing touches. I have no reason to believe this, except for some experience reading these guys’ books, so take this with a grain of salt. I don’t know what is driving this book. I don’t know why it’s called No Justice. There are just some questions I need to be answered in the first book that I didn’t get. Maybe in hindsight, I’ll see them, but as of yet, I don’t know. The dialogue hurts at times. There were opportunities to monologue, and they were taken. Exposition galore combined with lots of bickering and in-house fighting hurt this book for me. Not to mention that there were many scenes that were drawn out to fill a page count. It killed the pacing, and any momentum built up in previous pages.

Let me say here that I LOVE Francis Manapul’s art. When I first opened the book, that opening scene got me excited. The following scene built on that and then we got on the ship and things slowed down. Manapul’s storytelling felt off. His quality of art took a tremendous dip down to the point to where I was double-checking to see if another artist filled in. It looked bad, and Manapul just doesn’t do bad work. It makes me wonder what went wrong here. Was he rushed in his work? Did they make some last-second changes to the book? Whatever the reason, I hope it’s taken care of next issue.

Hi-Fi’s colors have never been my favorite. However, these opening pages impressed me. I was blown away by the vibrant and depth of color. Things just popped off the page at you and then we got inside the ship and saw another dip in quality. Cyborg in particular looks horrendous. Not only does he have an extremely bulky design, but his armor is red; bright, flat red. It looked like I colored him with a marker, while a professional did the rest of the page. Lex Luthor had a panel where they did this weird effect on his face. They did another weird look with Etrigan a page later, and although it looked kinda cool on him, it still looked off when in context of the rest of the page. AndWorld Design had a point where the word balloons were in a weird order on the first page. Not that it’s in a wrong order, but the way your eye travels, you’ll read the balloons in the wrong order. This definitely needed a fix before release. Other than that one hiccup, the rest was smooth reading and they did a good job.

Final Thoughts: It’s a nice ensemble of characters, but as of now, I’m not interested. I feel like I’m more interested in what’s coming out of this series than this series itself. Hopefully, it’ll give reason to be remembered. I expect more out of this group.