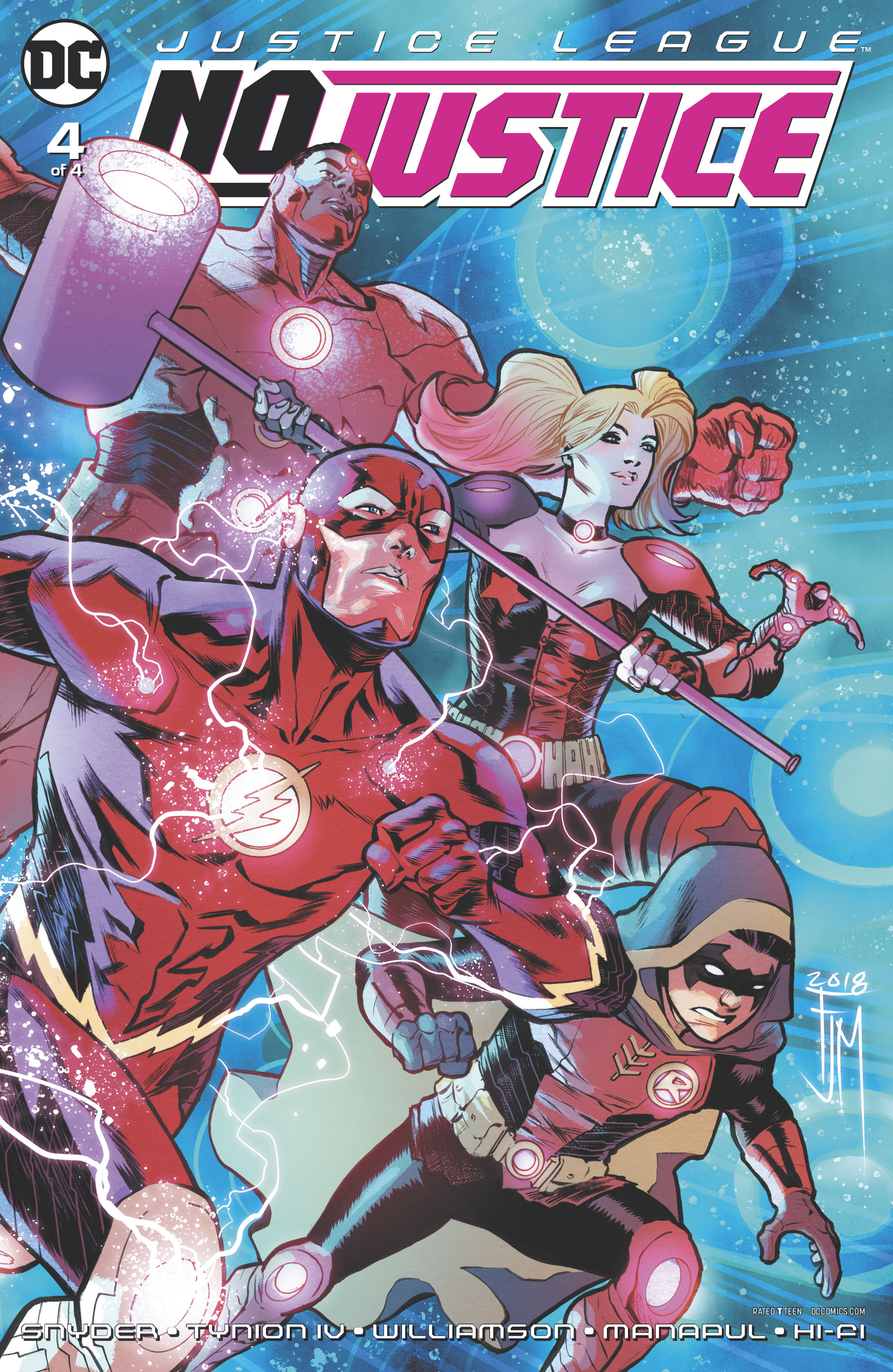 Overview: ‘Hello. My name is Brainiac 2.0. You killed my father. Prepare to die.’

Synopsis (spoilers ahead): Many members of the Green Lantern Corps are working together, trying to keep the energy from leaking out and destroying their universe. Hal gets a call from Oliver, telling him that Earth is about to be eaten.

Back where Colu used to be, many from the League are having trouble coping with failing to save a planet. Especially Raven, who is empathic. Damian speaks up, saying they need to get to Earth before it is destroyed if it hasn’t already been. Batman snaps at him, and then essentially says the same thing. Cyborg says that he can’t get the ship running. Its core was badly damaged in the blast and asks Vril (the new Brainiac) for help. However, Vril now hates the League because they destroyed his planet. He will not help them and in fact, he’s going to make sure Earth is destroyed as he teleports away.

Despite Green Arrow previously telling us he was the only hero on Earth to not fall unconscious due to Brainiac, we see Supergirl investigating the Tree of Mystery at the Fortress of Solitude and she is in contact with Batgirl. Vril appears out of nowhere, and shoots Supergirl, taking her out with ease, and moves along to speed up the tree growing process.

He makes his way to Belle Reve prison, where the Tree of Entropy is growing and gets there just as Amanda Waller and Green Arrow arrive. ‘Hello. My name is Brainiac 2.0. You killed my father. Prepare to die.’ But then Earth’s Green Lanterns show up and punch Vril in the face. Waller gets her hands on a trigger, willing to blow herself up along with millions of others to destroy the Tree of Entropy and save the planet.

As it turns out, Cyborg was able to power the ship, and got the League to Earth just in time, deploying each team to their assigned tree, but the teams are designed with Brainiac in mind and they need a Brainiac for them to save the planet. Waller grants him access to use the data she stole from Brainiac. The League concocts a new seed using the four main trees that has all four attributes. Their plan is to launch the seed into the Titan of Entropy so that the other the brothers eat him before he eats Earth. Hal constructs a giant crossbow, and Oliver fires it. Their plan works, and we now deal with the fallout.

Lex Luthor has seen some stuff and now leaves to prepare for what the universe has unleashed. Batman calls Black Lighting to help the League with things they can’t handle publicly. Nightwing already had a mission assigned to him, and Robin has decided to go about things his own way. Cyborg considers his space team, Wonder Woman speaks with Zatanna about getting in touch with her magic side, and the League elects Martian Manhunter to be League Chairman. As Chairman, he gives Green Arrow a box that he says has the capability to bring down the entire Justice League. He asks that he use it if need be.

Analysis: Scott Snyder, James Tynion IV, and Joshua Williamson ended, I don’t want to say “strong”, because that’s not what this was, but it was definitely the best issue of the series. Some story problems I had were:

1) The inconsistency of Vril Dox. He went from intimidating, to frightened, to intimidating again. Some of that may be on the artists involved, but that falls on the writer to convey that information.

2) We were clearly told that Oliver was the last remaining hero, and then we see Supergirl and hear of Batgirl being around. Either you admit there are other heroes around from the beginning, or that is a huge misstep on Brainiac’s part. Why would he not incapacitate the Last Daughter of El?

3) Cyborg saying he can’t fix the ship, and then fixes the ship. And this isn’t really a story problem, but I didn’t like it.

4) Robin clearly voicing a legitimate concern, being silenced, and then apparently he and Batman part ways. Why? Why do we keep doing this? DC has to realize that his storyline has to get old at some point, right? I’d like to see the entire Bat-Family together and getting along at some point. That’d be nice.

Francis Manapul, this time, does the art for the entire book since issue one, and it doesn’t look rushed at all this time. Manapul’s designs are amazing. In fact, I’d be in favor of them adopting a look similar to his Batman design on the second double-page spread. The way the cape met up with the edges of the bat-signal and black on the abdomen was a nice contrast. Hi-Fi continues the momentum he built up from the last issue. His colors were excellent here. AndWorld Design was solid as well. His letter placement and font were really well done.

Final Thoughts: This issue had some self-inflicted wounds, but overall it was pretty solid. I’m still extremely excited for the Justice League books we are getting out of this event.