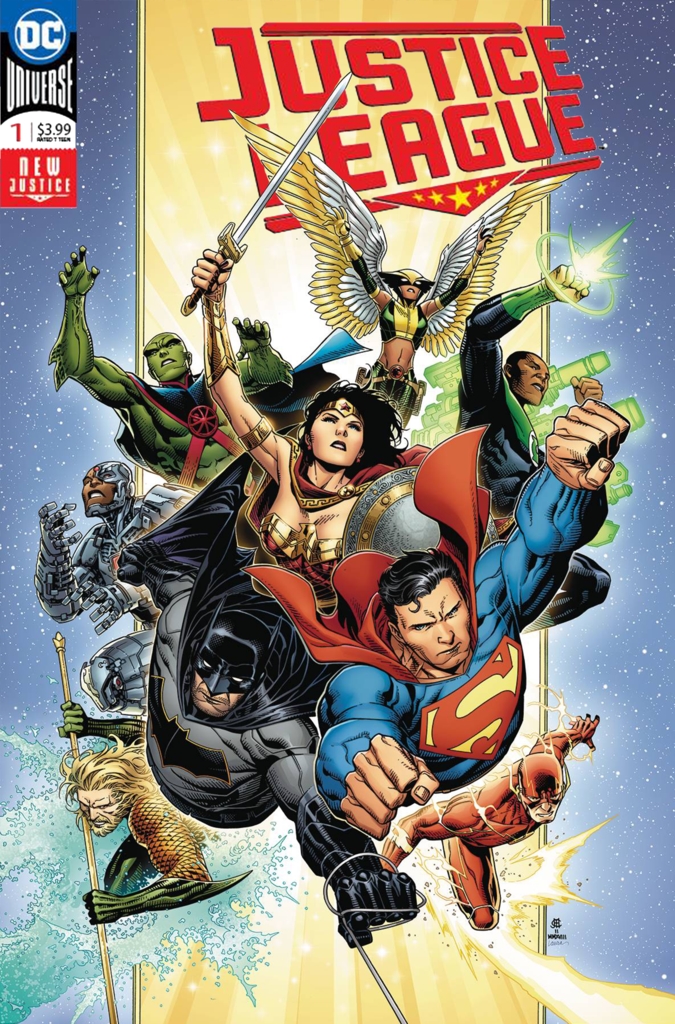 Overview: The Justice League tackle the issues caused by every disaster movie ever in a quick twenty pages.

Synopsis (spoilers ahead): A ball of energy rockets across space as it catches the attention of various beings across different timelines.

We make our way to the Hall of Justice and are shown off to what’s inside: costumes of each member of the League, a trophy room of depowered items, along with a secret door that few can see. Those who can see it are telepathically connected to the League and are allowed entrance.

Throughout the Earth, the League is divided up, fighting Neanderthals with various abilities. Everyone is picking on Batman in the process, making fun of his voice. J’onn observes from space, keeping everyone linked when he sees Earth’s crust break apart all over the world. J’onn plans a strike against the moon, just as Batman detonates bombs he planted on it (because of course, he did), to counteract the effects caused on Earth.

This was all a planned attack by Vandal Savage. With his failure, he tries to figure out his next move, when Lex Luthor shows up and defeats him easily, claiming to “rescue him from life.”

J’onn hallucinates the destruction of his planet when Superman finally reaches him telepathically, letting him know that he stopped it. Swamp Thing is repairing Earth’s surface, while Animal Man, Vixen, and Aquaman heal the animal life and oceans. J’onn calls for a team meeting and starts a psychic boardroom meeting.

Lex knows that Savage knew what the Source Wall really was and calls him a coward. He introduces Savage to his Legion of Doom and informs him that he owns the secret base that Savage thought was his. He tells him of the monster in the basement, the weapons in the attic, and the invisible doorknob that he holds in his hand that can kill Savage. Savage begs him not to continue seeking for the truth.

The League has minutes before the Totality strikes Earth and they still don’t know what to do. Batman calls John Stewart to shoot a wormhole bullet at it, sending it outside the Source Wall.

J’onn is about to decide the date of the Totality when he hears a shriek that pulls him out of the psychic state. He sees visions of things already done, and things yet to occur. He sees the destruction that lies inside that energy. He tries to change the mind of his League members, but he’s not the Flash and he runs out of time. The Totality strikes Earth.

Analysis: Scott Snyder does an excellent job of pacing out this issue. It almost had a canter to it. No one scene bogs the story down. The story builds climatically amazingly well until it reaches a crescendo at the end of the book. Snyder also begins to meld the scenes together as we approach the end, which is something that comics can do better than any other medium. This is often a technique used in movies and TV shows, but when done right, they can’t compete with comic book storytelling. I know Snyder likes to do crazy science stuff in his books, but I do greatly question the fallout from these events… Busting up the Earth’s crust. Blowing up the moon. I would think that would kill a great number of the population here on Earth, I don’t care what Swamp Thing does afterward. I really like the dynamic of the team. It reminds me of my childhood, watching the Animated Series.

This was my first-time experience Jim Cheung’s art. If you asked me to describe it to you, I’d say it’s if Tony Daniel, Andy Kubert, and John Romita Jr’s art all had a baby. His storytelling is really good, his panel layouts don’t repeat and hold your interest, his style is very unique and I really like what I see. It’s kind of a throw-back look that is refreshing.

Mark Morales inked this issue and does a solid job. His pen lines are as smooth as James Earl Jones’ voice, giving the book a fresh, clean look. Tomeu Morey colors here and does a great job. With all the different characters, it’d be easy to slip and do a wrong color or slack off for a page or two. But the guy stays on top of things and keeps the colors bright and vibrant enough, without overdoing it and making the page too busy. I really like his texture on skin tones and the different lighting he does throughout the book. Tom Napolitano letters this issue and does a solid job. His letterbox placement was great, although I had a difficult time telling who was talking in the intro between League members. They tried to color the outside of the box to give you a clue as to who was talking, but it’s not as effective as it tries to be. Maybe it would if you used those colors thought the book, even during normal dialogue sessions, but that would get old too. The jokes just didn’t land as well when you don’t know who’s talking.