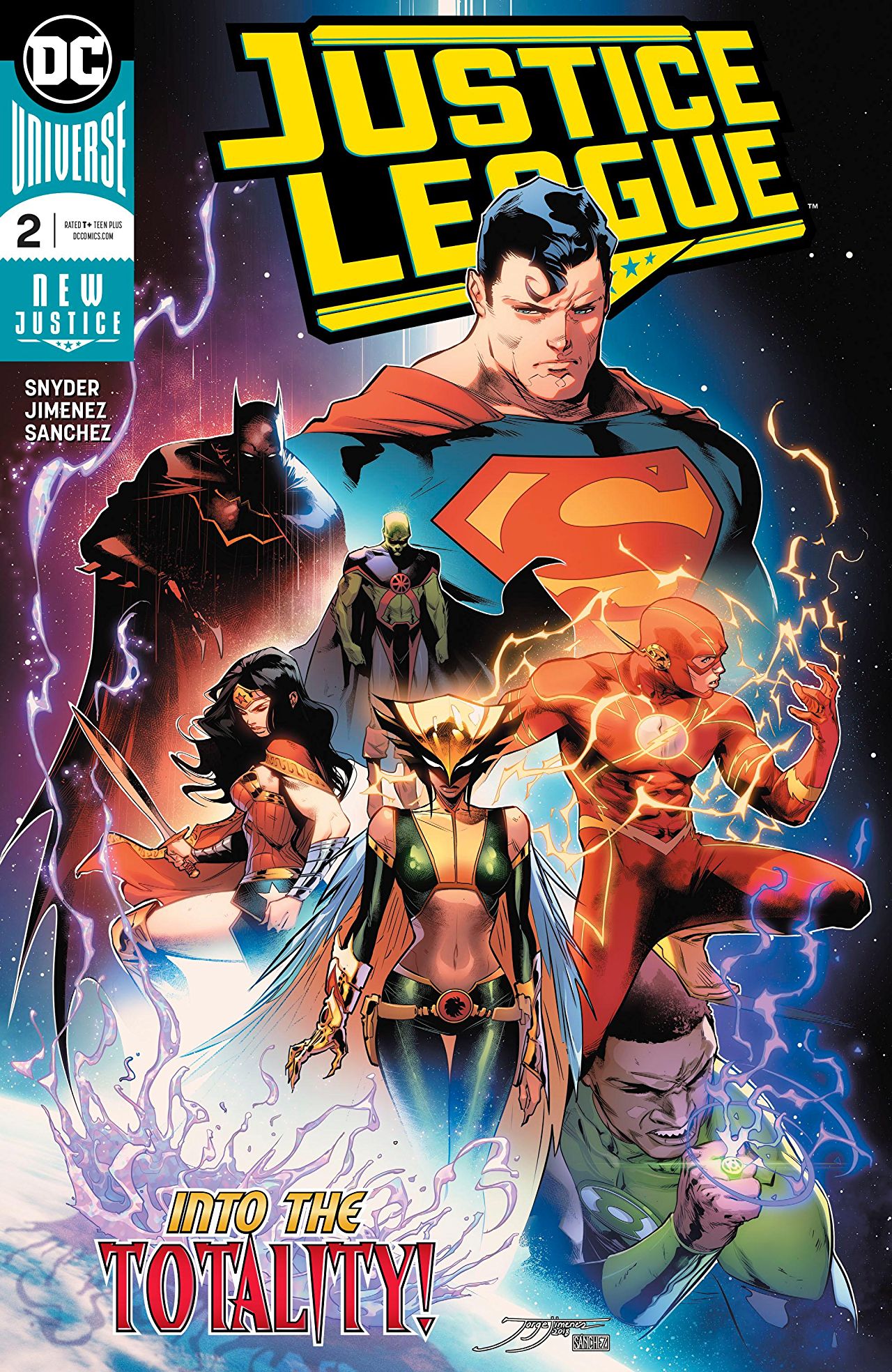 Overview: The League makes their way inside the Totality, and Lex Luthor hitches a ride as well.

Synopsis (spoilers ahead): Lex Luthor stands in front of an American flag, giving us a Presidential speech. Who’s his audience, you ask? A small group of Vietnam veterans, who believe this man found the wrong building. He didn’t, though. He informs the men that he bought this building and he’s loaded it with explosives. They don’t take him seriously, until he tells them of his “bombproof” suit, and gives them proof of that by activating a helmet to protect his head. They all rush out of the front door, passing a glowing door on the left that’s much closer, however, it’s one that they can’t see. Lex examines the doorknob, as it seems he did all this as a test for the mysteries of this door.

In deep space, the best Green Lantern, A.K.A. John Stewart, is transporting a prisoner of the Green Lantern Corps back to Mogo. The prisoner, Greelok, begins taunting John of the Source Wall being destroyed by the Justice League, as well as their unleashing of the Dark Multiverse. On top of that, John is sitting on the dashboard of his ship, a Blue Moebius – a plant from Xanshi that is supposed to take away any bad thoughts.

As Greelok begins to get to John, Swamp Thing reaches out through the Blue Moebius. He turns the reigns over to Batman to deliver a message. He asks John to join the club and come to help them with the Totality right now, which is a giant head with an energy shield that prevents them from getting inside. John tells him that this is a bad time, but Bruce insists, saying that he KNOWS that John knows something about this Totality that the rest of them don’t. There is a bunch of road noise and Bruce will have to call him back later, as Killer Croc enters inside. The Totality mutated him to the point where he would protect the the thing from the entire Justice League. J-Stew is still reeling from the events that took place on Xanshi, and questions if J’onn has really forgiven him (this is where there should be an editor’s note for checking out a Green Lantern comic from the 80’s where John and J’onn teamed up, but then John wanted to show off, and then the planet died because of it). Batman says that he does, and when J-Stew asks why J’onn didn’t contact him, it’s because he has his hands full fighting Croc. The plant-Skype-call ends, and the League hope that John is considering helping them.

On the ocean floor, Lex brings his part of his Legion to another lair of his. He tries to convince them that the Totality is something they have to explore. Grodd just wants revenge on the Flash. Luthor introduces Grodd to his new partner, a baby with immense power.

Back in the Hall of Justice, Barry builds a special vehicle that can tap into the Speed Force. He’s been having trouble controlling his powers since the Totality struck Earth. He worries that Turtle is using an opposite power called the Still Force to inhibit his abilities. Superman and Martian Manhunter arrive and announce that they are heading out to investigate the Totality. They tell Barry that he has to stay behind. With his powers fritzing out, they can’t risk his life. Besides, Clark and J’onn are the only two who can withstand the energy field of the Totality, which is why Bruce worked with Ray Palmer to create a vehicle that miniaturizes and can be implanted in a being. Bruce is already inside Clark (what Tumblr has always wanted) and J’onn asks Kendra if she would join him.

Back in deep space, Sinestro has found a new form of power rings – that of the ultraviolet light and the invisible emotional spectrum (because willpower is totally an emotion and definitely one you can see. The Lanterns make no sense).

When Lex looked inside that door at the beginning, he saw the date of mankind… The truth. The Totality is the key to that. Cheetah grows suspicious, though, and claws his face clean off. However, it’s a Lexbot. Mr. Luthor can’t take your call at the moment. Please leave your message after the beep…BEEP.

Clark and J’onn make their way to the Totality in some specialized suits. They push their way through the energy field, along with their chosen teammates… Except Clark has an uninvited guest they have yet to discover; Lex Luthor is having the time of his life.

Analysis: Scott Snyder, again does a nearly flawless job in pacing this comic out. The way it builds in reaching its climax is amazing. The guy really knows how to work a page. There are things that confuse me, though. Why was Lex at that veterans center at the beginning of the comic? Did he remember that from his childhood? Does he suspect that’s why his father spent so much time there? Isn’t there a more practical way to test if others can see it, other than blowing the place up? I just don’t get it. The page count Snyder is downing out amongst the different characters, including Lex Luthor is really fun to see. I love having John Stewart back on the team. I feel like he hasn’t gotten a fair shake in a while, and I find Hawkgirl much more fascinating than Hawkman for some reason. It’s probably because of the cartoon show.

I love Jorge Jimenez’s art. I remember seeing it for the first time in his days as the artist for Earth 2, and I thought it was great. He’s an extremely talented animator. He’s gifted at both action scenes (as they look as though they are in motion) and conversational pieces (his facial expressions are extremely entertaining). The guy is a master and I love seeing his work come to the forefront of the DC Universe.

As has been mentioned in previous reviews from various reviewers on this site, Alejandro Sanchez is a master of lighting. He always uses bright, poppy colors that add life to the page, but always balanced it out with a couple amount of shadow casting and his lighting effects. The guy knows when to use blue light vs yellow light, and sometimes red saturated light in the case of Batman. Tom Napolitano does a nice job lettering this. Although it took me a second to realize that it wasn’t J’onn telepathically talking to John, I quickly caught on and had no problem reading the rest of the issues.

Final Thoughts: This series is as if the animated series and Grant Morrison’s run had a baby and I am loving it.